Alberta Agriculture and Parks wild boar specialist says the only way to eradicate the wild boar problem in the province is through group trapping
Oct 5, 2020 1:15 PM By: Barry Kerton 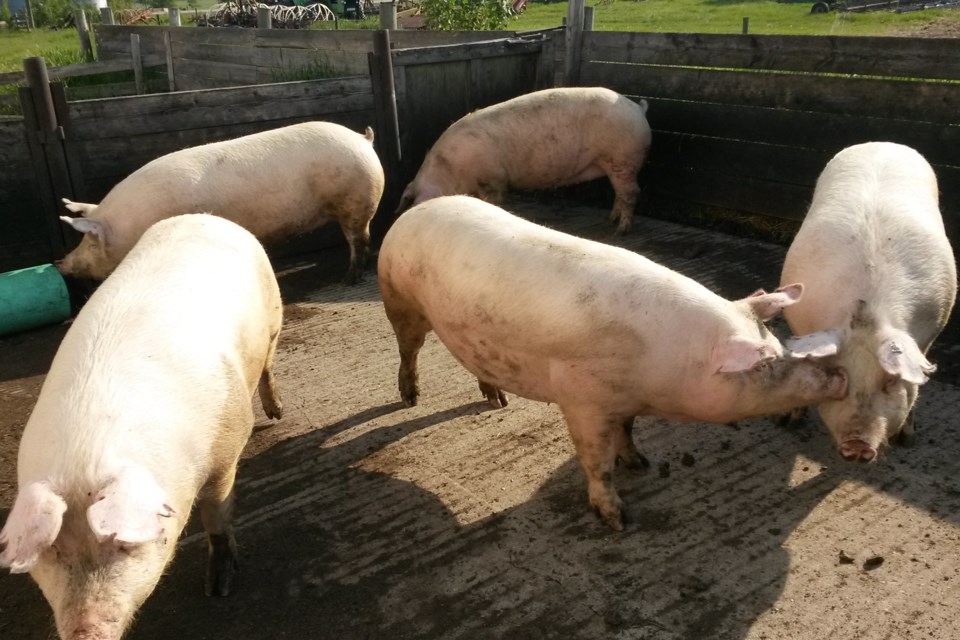 Domestic pigs could be at risk to diseases such as African Swine Fever. Currently, the disease has only been detected in Europe. However, experts are concerned about what could happen if it were to infest Canada's wild boar population, which could then infect domestic pigs. Photo courtesy of Walter Preugschas

BARRHEAD/WOODLANDS COUNTY-It seemed like a good idea at the time.

That is how Perry Abramenko characterized the decision hog producers made to bring wild boars into the province.

Abramenko is an inspector with Alberta Agriculture and Parks and is one of the specialists tasked to eradicate wild boars from the province.

In the 1980s and early 1990s, Alberta farmers were encouraged to diversify their livestock. And that is what many of them did, bringing in wild boars mostly from the U.S. but some of them from Europe.

Unfortunately, he said at the time, the "powers that be" did not believe the wild boars were much of a threat to escape into the wild and as a result, the government required producers to put in few safeguards to ensure they stayed where they belonged.

"They believed our winters were too cold," Abramenko said. "I'm not sure how they came up with that logic because these animals evolved in the cold."

Once the boars escaped, he said it did not take long for them to not only become established but become a problem, not just for the native wildlife but agricultural producers.

"They will trample crops, create holes that cause farm equipment to get stuck or damaged, they wreck pastures with their rooting," Abramenko said.

He also noted that because boars do not have sweat glands, they tend to be attracted to water sources, often contaminating them, cause damage to fish habitats, spread weeds that cause erosion.

The boars also have the potential to spread diseases to other wildlife and livestock. This Abramenko said is especially concerning to hog producers due to African Swine Fever (ASF). ASF is a viral disease that only impacts pigs. It poses a significant risk to the health of the Canadian swine herd, pork industry and the Canadian economy. It is highly contagious for pigs and can spread rapidly through both direct and indirect contact with infected pigs or pig products, as well as contaminated farm equipment, feed and clothing.

ASF has not been detected in Canada, noting so far the disease has been confined to Europe, most notably in Germany as well as Asia.

And with any luck that is where it will stay, Abramenko said, because if it does come to Canada and Alberta it will be difficult for commercial hog producers to keep it out of their operations.

"If you have a viral infection on a commercial farm, there are biosecurity measures that can be put in place and you can control it," he said. "But if you have an infection in a wild herd you don't have those tools. [ASF] can be quite easily spread from the wild boars roaming at large to tame pigs quite readily and that is one of the reasons why our goal is to eradicate wild boars at large."

The problem is that it is easier said than done.

Abramenko said wild boars are very intelligent animals who are quite prolific with the average litter of six.

Alberta Agriculture and Parks just completed a three-year pilot project to learn more about the animals and how wide-spread the problem is and refine methods for tracking and capture of the animals.

Although Abramenko said they learned a lot about the animals, regrettably they still have an incomplete picture. For example, he said they still do not know how many are out there in the wild.

"We do know that there are a lot, in the hundreds and potentially in the thousands," he said.

They also learned the highest concentration of roaming wild boars are in the central and northern areas of the province, with Woodlands County and Lac Ste. Anne being the epicentre. Abramenko noted that the boars have been spotted in the County of Barrhead and Westlock County but to a lesser extent.

"Right from the start, we realized that we would have to change our tactics," Abramenko said.

At one time the province encouraged residents to hunt the animal offering a $50 bounty for every pair of ears as part of the Wild Boar at Large Ear Bounty Program. In 2008 to 2017, the program ran, the province received confirmation of about 1,000 wild boar kills, mostly in the Woodlands County and Lac Ste. Anne region.

He said although the program was well-meaning, it actually caused more harm than good.

Because the animals are so intelligent Abramenko said killing one or two boars out of their sander (group) alerts them to human presence and they end up scattering.

"They then end up infesting new areas and at the same time they will have two litters a year with an average of six each time," Abramenko said.

He also noted because they are not a native species they have very few natural predators.

The only way Abramenko said that they will be successful in eradicating the wild boar is by capturing the entire sander, which again, because of their intelligence is very difficult.

However, Alberta Agriculture and Parks have come up with a method they believe will be successful.

After determining there are wild boar in an area, a trapping specialist the province has contracted through a partnership with Alberta Pork will put out what is called a prebait, often fermented corn and outfit it with a small camera. When the camera detects potential wild boar activity, the specialist will be alerted. They then set up a coral trap, setting up a perimeter with livestock panels leaving a big opening.

"By then we will know how many are in the sander and when we see that all of them have entered the coral trap we will then install the gate which can be remotely deployed," he said.

About the Author: Barry Kerton

Barry Kerton is the managing editor of the Barrhead Leader, joining the paper in 2014. He covers news, municipal politics and sports.
Read more