Lori Frank just wants to "keep creating beauty, to take people's minds off of COVID and their troubles."
Aug 27, 2020 7:00 AM By: Chris Zdeb 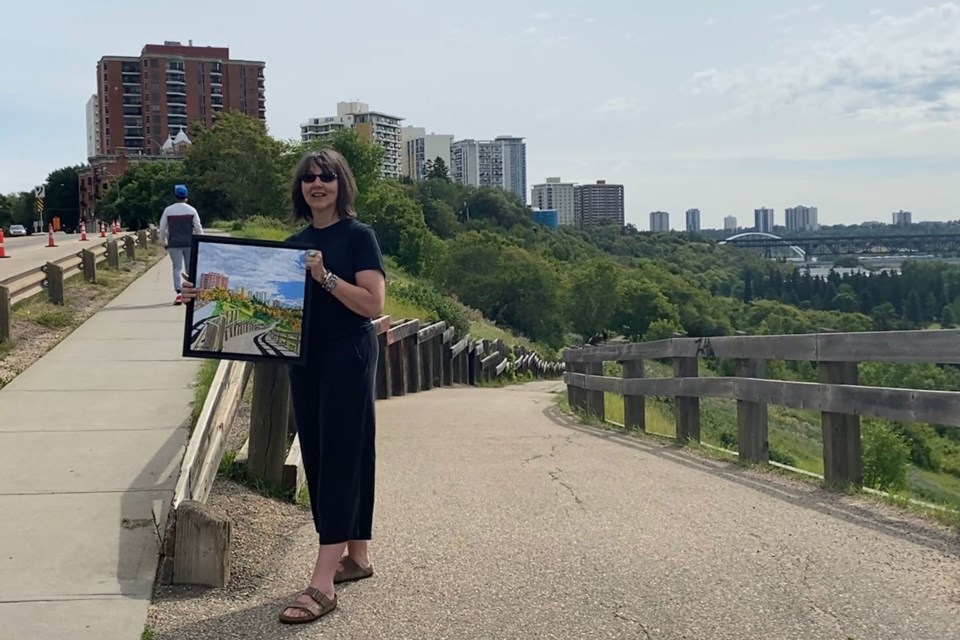 Edmonton artist Lori Frank pictured with The Path, one of her paintings of the river valley that she's known for. Photo supplied

Lori Frank is a rare bird among artists, a painter who could make a living from her art.

What took her years to achieve, was taken away in an instant by COVID-19.

"We all went into isolation and it was like everything was put on pause," she said.

Art shows and festivals, where she'd sold her art, were cancelled.

"And it wasn't like I was able to post any paintings on social media, people didn't want to see any art at that point. Why would they want to see when they couldn't even afford a painting, let alone know if they had a job to go to?

"I had to scale back everything, absolutely everything, and be aware of that, even though it's how I put food on my table."

At the same time, the Edmonton artist saw self-isolation to stop the spread of COVID-19  "as an opportunity of a lifetime."

She'd put her painting on hold for a year to care for her mom, who died in hospice in August 2019, and felt she'd fallen behind with her art.

From March to May, what Frank called the "depths of COVID isolation," she woke up every day at 5 a.m. and used the time to go through the tens of thousands of photos she had taken to inspire her paintings. Frank is known for her paintings of Edmonton's river valley, including a series on river valley staircases.

"I redid my inventory system online, updated my online store, my website, added a newer diversity of product, price points that were lower, so I really utilized my time extremely well."

She also developed ideas for a new painting series.

Musicians were also inspired by the pandemic, leading other artists in adapting to the shutdowns by turning to technology to virtually reconnect with people.

"It was just a progression," Frank said. "Music resonated with everyone and people like Chris Martin, (lead singer of Cold Play), started performing free virtual concerts online. There was an awareness of the healing effects of art, of music, that sort of opened up people to connecting and took away the barrier between them and musicians."

Visual artists, such as herself, experienced that reconnection as the period of self-isolation dragged on and people started to realize and accept that they wouldn't be flying anywhere or going anywhere soon, Frank said.

"So they looked inward into their homes and wanted to create sanctuaries there. That's when everybody saw some artists that were painting murals outside and people started to beautify their houses and do renovations. Interest in art started to pick up again and the public started seeking me out."

No longer able to do in-person shows, Frank, like others before her, pivoted the way she does business by investing in a webcam and creating videos of her work, and embracing different kinds of updated technology she'd never used before like Zoom and Facebook to virtually connect with potential buyers.

"If they want to virtually view a painting, I'll FaceTime them or however they want to do that. I also offer curbside pickup (from her downtown condo building) and no-contact distancing."

The latter involves displaying her inventory in a room on the main floor of her building with Frank and the prospective buyer wearing masks and staying two metres apart as the buyer shops.

It's been a tough transition with only one bright spot in those first three months, she said.

Frank's heart soared in May as she watched the Canadian Armed Forces Snowbirds streak across the bright blue Edmonton sky during a cross-country tour meant to boost the morale of pandemic-weary Canadians.

The Edmonton artist took pictures, planning to capture that glorious moment on canvas.

"I wanted to paint it because I thought it was the first good, pure, happy, inspirational thing (to come from the pandemic),"  she said. "Finally, good news about something in this world. And then two days later, boom."

Frank's heart broke with news of the death of Capt. Jennifer Casey, a public affairs officer with the air show flight demonstration team, killed when one of the planes crashed in Kamloops, B.C.

She decided not to paint the Snowbirds' flight over Edmonton, but changed her mind at the urging of many people. Frank called it On the Wings of an Angel, dedicated it to Casey's memory, and is donating a portion of the proceeds to the Edmonton Humane Society because Casey was an animal lover.

The original acrylic painting is still for sale, but she has sold many smaller paper prints, which, unintentionally, helped keep her afloat. 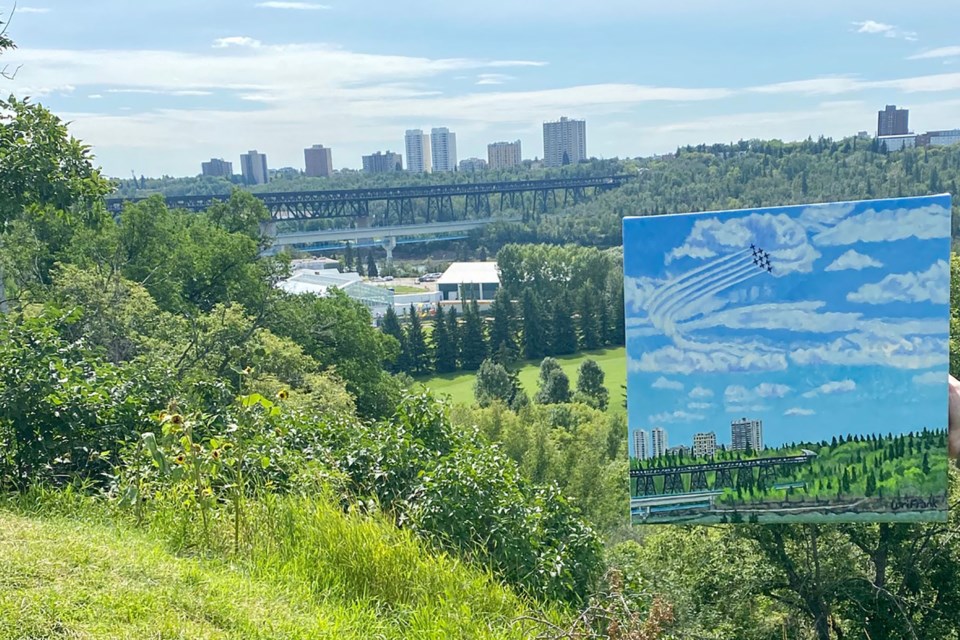 Lori Frank's painting of the flyover Edmonton by the Canadian Armed Forces Snowbirds in May as part of a cross-country tour to boost the spirits of COVID-weary Canadians. Photo supplied

Frank has just started a new series of paintings called On the Road Again, emerging from a road trip she recently took through Alberta and British Columbia. The first completed painting is of Moraine Lake in Banff National Park.

You won't find one of her prints on a face mask because she has no interest in COVID art, explaining she'd rather forget the pandemic.

"I just want to keep creating beauty, to take people's minds off of COVID and their troubles. I utilize colourful, joyful colours for people to feel hope and joy when they look at my paintings."

Although she's not able to make a living from her art at the moment, "I'm trying," Frank said.

"People are buying art, but they're buying small, generally, they're not spending as much money. I'm just hoping that things turn around. I'm looking forward to the possibility of participating in virtual shows now, sort of a trend that's up and coming."

In the meantime, "I'm just staying open and positive with my out-of-box thinking."

Name the painting and win it!

"Moraine Lake is jaw-droppingly beautiful and the turquoise water always makes my heart skip a beat or two," she said.

The painting needs a name which is where you come in. Enter your name suggestion on one of Great West Newspapers contest pages HERE by Sept. 9, 2020.  Frank will choose the winner who will receive a 12" x 16" print of the painting. 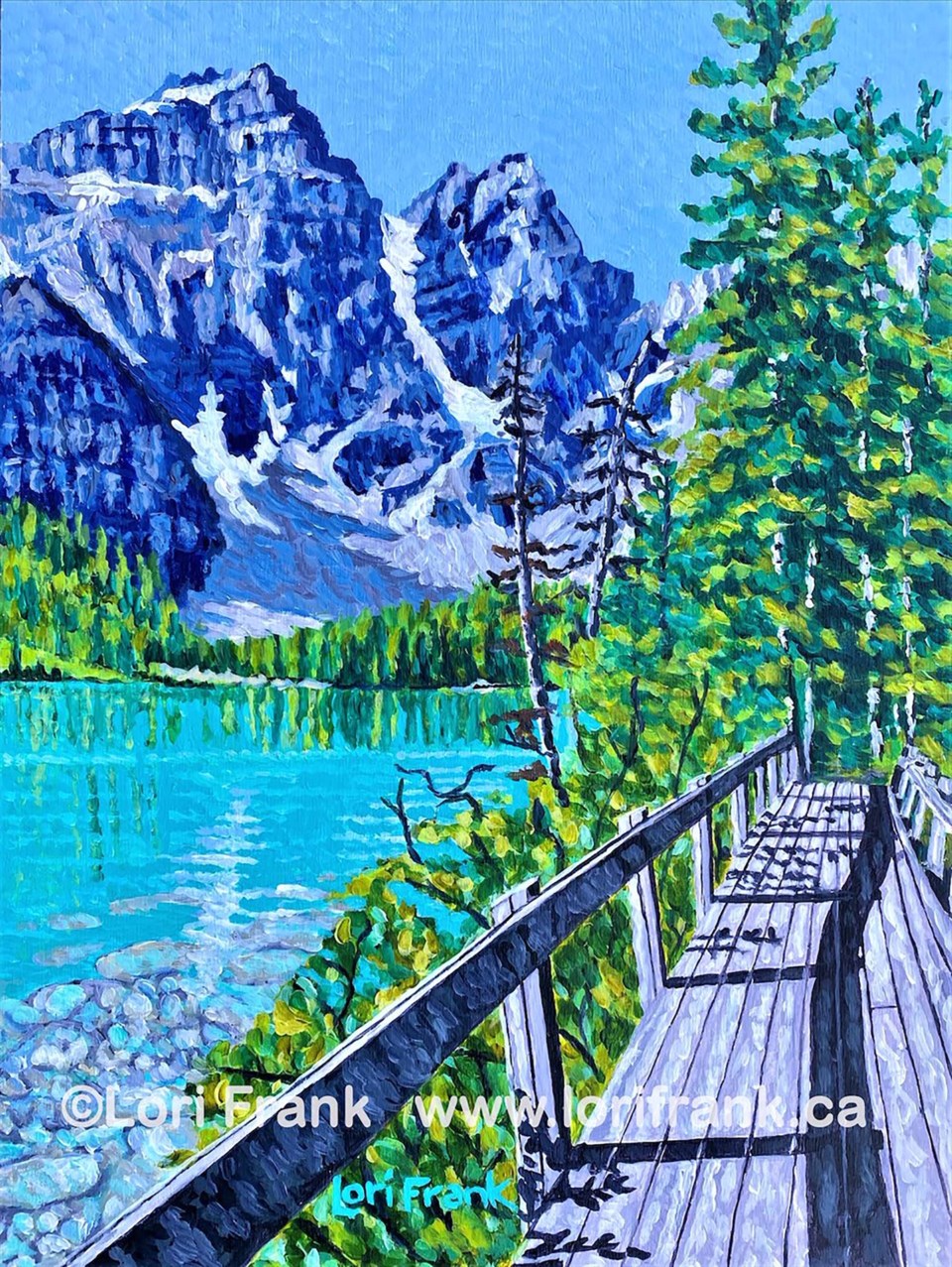