Silent no longer Part 4: Bringing peace to Innisfail from a fractured homeland

Arif Majeed’s quest for equality continues for his people and the young
Oct 4, 2020 9:45 AM By: Johnnie Bachusky 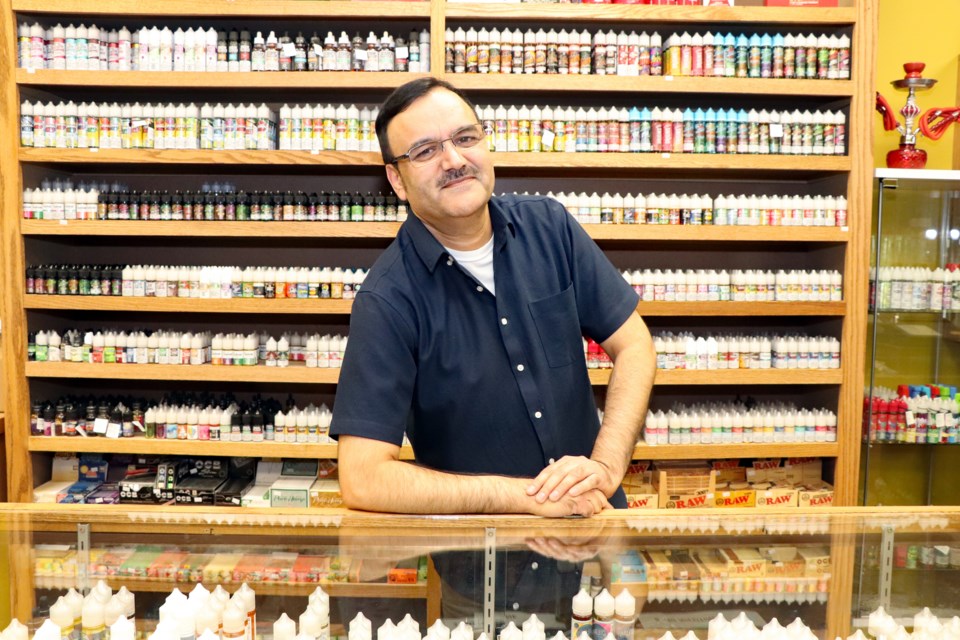 Arif Majeed at his Tobacconist La Havana shop in downtown Innisfail. Originally from the disputed land of Kashmir, he is at peace in Innisfail. Johnnie Bachusky/MVP Staff

INNISFAIL – There is always a soothing peaceful quietness inside Arif Majeed’s immaculate store on Main Street.

For the past two years the local businessman has worked long hours in his Tobacconist La Havana shop to make it a success at the new downtown mall, which since being built in 2018 has struggled to find tenants. But Majeed is succeeding, partly because of his enviable work ethic but mostly by the way he carries himself.

There is never any bullish sales pitch to the steady stream of customers. Majeed is a humble and gentle man who treats every customer with respect, which is instantly reciprocated.

“I love Canada. Canada is my second love,” said the 46-year-old Majeed, who first came to this country 21 years ago. “Canadian people are very good in nature, very helpful and have very good manners, as compared to Americans who are a little rough in talk. Canadians are more polite.”

Mostly though, Majeed is a man who exudes gratitude in every aspect of daily living. When COVID began last March his store continued to operate, and he was there seven days a week, never complaining about the challenges brought by the pandemic.

This is all the more remarkable because of the trials once faced, ones centred on his first love – his beloved homeland of Kashmir.  More commonly known as the former princely state of Jammu and Kashmir, it’s a vast disputed territory of 222,236 square kilometres on the Indian subcontinent. It is home to almost 13 million citizens, with a clear majority being of Muslim faith.

This disputed territory was once a semi-sovereign principality during British Crown rule from 1858 to 1947. It was then partitioned between India and Pakistan, and later China. Since the partitioning, there has been three wars, and plenty of uncertainty, especially with the many loyal Kashmiri who seek the return of independence.

Despite leaving his homeland in 1999, Majeed still proudly identifies himself as a Kashmiri whose faith is Muslim. His family is originally from today’s Pakistan sector of control. He said living conditions were at least bearable, as compared to the Indian-controlled area where there is still widespread persecution.

“Every third person is persecuted. Every fourth person is taken into custody and beaten. They don’t have to have a report against you,” said Majeed slowly and always gently. “They come when you are young, they just take you and just put you in the jail.

“With many kids, their parents don’t know where they are. They are taken to the different jails in different cities,” he said, adding there is a “huge” freedom movement in this India controlled area, even with the current security lockdown and communications blackout that has been enforced since last year with thousands of arrests.

“They say go back to your country. Leave our place but India does not want to listen. They have abducted many youth, children and women,” said Majeed. “Those people are suffering, like hell.”

Majeed became a Canadian citizen in 2006. He has lived in Alberta since 2011, arriving first to Red Deer and then becoming owner and operator of the Fas Gas in Penhold. He moved to Innisfail in 2018.

“Wherever I have gone the people I have met have been helpful. My mind was so relaxed, and I found a place to live and to grow our family here in Alberta,” said Majeed. “When I opened this store, I did not know much about the town or the people. Since I opened people have been very supportive.”

Majeed and his family still have a yearning love and desire for their homeland. He is always keenly aware of the latest political news, which is often not encouraging. He is also well aware of what is happening around Innisfail.

Last June, he was interviewed by out-of-town media about the anti-racism rally and whether he experienced racism. Majeed said he had not, and that Innisfailians were kind and helpful. However, he does feel the movement by the town and the work of the award-winning Welcoming & Inclusive Community Committee was important for the town’s youth, including his three children, whose ages range from 11 to 16.

And this is the way forward for Majeed. He is a man of peace in all his affairs, a fact driven home in the Kashmirian community where he lived as a child when there was perpetual harmony between Muslims, Hindus, Sikhs, Punjabi and Christians.

“We were all like one family. There was no issue at all. There was zero of this kind of problem (racism). Zero per cent,” he said.

Majeed noted the book of Quran, the central religious text of Islam, has all answers for how followers of Islam should be when it comes to exercising their God-given responsibility for being a human being.

“A negative impression of Islam or Muslims is because of the media. Religion is not bad, people are bad,” he said, noting Muslims respect all Holy books and messengers and prophets of God. “Our religion teaches humanity, to love humanity and love humans. You can’t harm even an ant.

“This is our duty, to respect everything.”