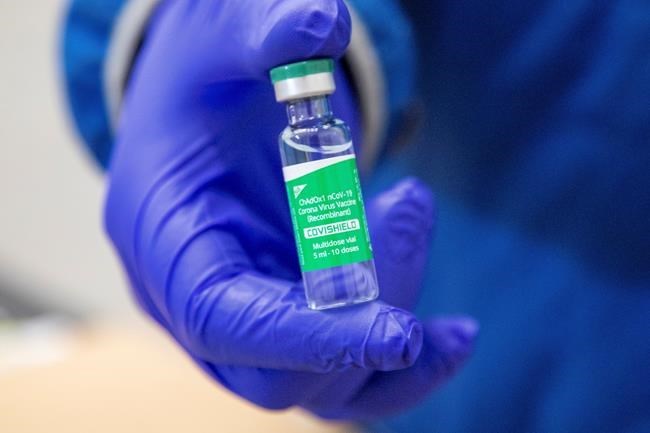 EDMONTON — An Alberta woman in her 50s has died from a rare blood clot disorder after receiving the Oxford-AstraZeneca COVID-19 vaccine.

It is the second reported death from vaccine-induced immune thrombotic thrombocytopenia or VITT linked to the AstraZeneca vaccine in Canada. A 54-year-old Quebec woman died last month.

Alberta's chief medical officer of health, Dr. Deena Hinshaw, said in a statement late Tuesday that the fatality is the province's second VITT case out of more than 253,000 doses of AstraZeneca that have been administered in Alberta to date.

Two weeks ago, Alberta announced a man in his 60s had been diagnosed with VITT and was recovering.

Hinshaw said while any death is tragic, "it is important to remember that the risks of dying or suffering other severe outcomes from COVID-19 remain far greater than the risk following AstraZeneca vaccine."

She noted the global risk of developing VITT has been estimated at about one case in 100,000 to 250,000 doses of vaccine. In comparison, Albertans between the ages of 50 and 59 who are diagnosed with COVID-19 are 350 times more likely to die from that infection than to experience VITT after an AstraZeneca shot.

The latest death linked to the AstraZeneca vaccine comes days after the country's National Advisory Committee on Immunization appeared to contradict Health Canada's long-standing recommendation that the best vaccine is the first one available.

NACI said Monday that the Pfizer-BioNTech and Moderna vaccines are "preferred" and that Canadians should weigh the risks of waiting for one of them before deciding whether to take a more immediate jab of either the other two approved COVID-19 vaccines in Canada.

Both the AstraZeneca and the Johnson & Johnson vaccines have been linked to VITT in a very small number of cases.

Because of that, Dr. Shelly Deeks, vice-chair of the committee, said someone working from home in a province where there is not much disease might want to wait for a shot of the Pfizer or Moderna vaccines.

But she said it would be a very different risk-benefit analysis for someone working in a manufacturing plant without personal protective equipment in a province where COVID-19 is spreading like wildfire.

On Tuesday, Alberta had 23,623 active COVID-19 infections — the highest case rate of any jurisdiction in North America. There were 671 people in hospital due to the illness, with 150 in intensive care.

There have so far been 2,099 deaths linked to the virus in Alberta.

As of April 24, some 1.7 million doses of the AstraZeneca vaccine have been administered in Canada.