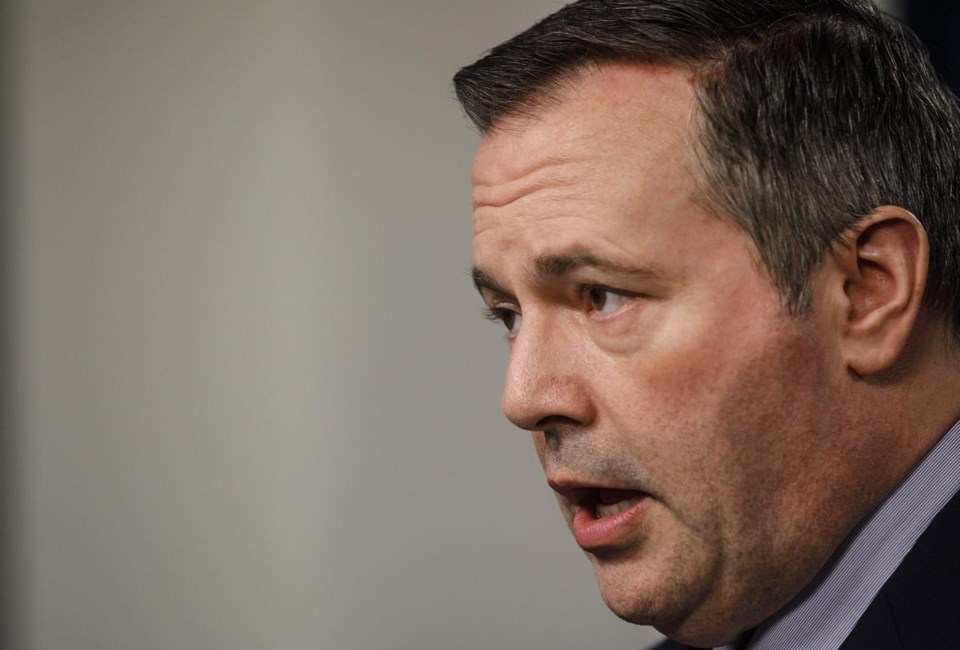 EDMONTON — Premier Jason Kenney, with surging COVID-19 rates threatening to overwhelm Alberta’s hospitals, is reintroducing stricter rules on gatherings, businesses and schools not seen since the first wave of the pandemic.

Kenney, in a live address on TV, social media and the United Conservative government's website, said the next three weeks are critical and that potential catastrophe awaits.

“If exponential growth of COVID-19 in Alberta continues, it would begin to push the outer limits of even our surged and expanded hospital capacity within weeks,” Kenney said Tuesday night.

“We will not permit our health-care system to be overwhelmed. We must not and we will not force our doctors and nurses to decide who gets care and who doesn’t.”

Some of the tighter restrictions haven’t been seen in Alberta since the first wave of COVID-19 last spring.

They apply to most of the province, except small sections with small caseloads.

All kindergarten to Grade 12 students will be sent home to learn online at the end of the week until at least May 25. Thousands of students in higher grades in Edmonton and Calgary have already been learning from home.

Outdoor gatherings are being cut from a maximum of 10 people to five as of Wednesday. Indoor social gatherings remain banned.

Non-critical businesses with outbreaks must close for at least 10 days.

Customer capacity in retail stores, at 15 per cent of the fire code maximum, will be 10 per cent as of Wednesday. And worship services, also at 15 per cent capacity, will be limited to a maximum of 15 people.

Kenney also said there will be stepped-up fines and enforcement.

His announcement came shortly after the federal NDP asked Ottawa to consider invoking the Emergencies Act in response to the crisis in Alberta.

New Democrat Heather McPherson, the MP for Edmonton Strathcona, says in a letter to the Speaker of the House of Commons that she will propose an emergency debate Wednesday.

Alberta had 23,623 active COVID-19 infections Tuesday — the highest case rate of any jurisdiction in North America.

There are 150 infected people in intensive care wards with the illness, numbers that in recent days have matched or exceeded record levels.

Alberta's Opposition NDP Leader Rachel Notley said Kenney's announcement was another example of a premier hesitant to introduce and enforce restrictions, then doing it on the fly when forced with little notice to those affected.

“It should never have gotten to this level,” said Notley.

“The numbers are huge, bigger than they ever have been before. And they’re going to continue to grow for at least another week before the effects of these measures come into play."

Kenney said the health system can free up to 425 intensive care beds to deal with the surge but that would mean massive cancellations of non-urgent surgeries along with other impacts to the system.

Hospitals in Calgary and Edmonton have already cancelled one-third of non-urgent surgeries to free up bed space.

Earlier Tuesday, dozens of emergency room physicians and specialists said Alberta is on track to double to 300 or more the number of ICU patients by month’s end. That would be on top of another 150 patients expected to be in critical care for other ailments.

The 48 doctors, in an open letter under the University of Alberta Faculty of Medicine letterhead, said that combined number would likely push bed space and staffing beyond capacity and force doctors to triage patients.

There were 671 people in hospital with COVID-19 on Tuesday. At the height of Alberta’s second wave in December, there were more than 900.

The third wave has been powered by the spread of more contagious variants, which now compose about two-thirds of active cases.

Alberta has had more than 1,000 new cases nearly daily for almost a month. Over the last week, the number has leaped to more than 2,000.

Kenney resisted stricter rules as late as eight days ago. He said existing restrictions were sufficient, that more people simply needed to follow them, and that stiffer rules would likely be ignored by a pandemic-fatigued populace.

By Thursday, however, he announced school and gym closures in high-case hot spots in urban areas, including Edmonton and Calgary.

As numbers continued to soar over the weekend and hundreds of unmasked people attended a “No More Lockdowns” rodeo in central Alberta, Kenney said new measures were needed.

-- With files from Christopher Reynolds in Ottawa

Fire investigators can't pin cause of fire at Edmonton-area seniors complex
May 14, 2021 4:59 PM