Cenovus to buy Husky Energy for $3.8 billion in shares, CEO will be Alex Pourbaix 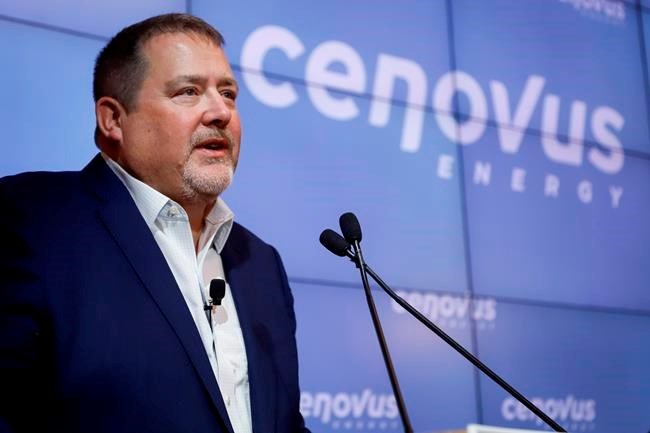 The all-stock transaction was cast as a $23.6-billion deal by the Calgary-based companies by including the value of Cenovus and net debt, reported at the end of the second quarter as $8.2 billion for Cenovus and $5.1 billion for Husky.

"It is unique for the assets of two companies to complement each other this well," he said on a conference call on Sunday.

Husky CEO Rob Peabody added it's the "start of a new chapter."

"Over the past several months as we worked together on this transaction, from a value and strategic perspective, the merits and overall fit have become abundantly clear," he said on the call.

Combining the companies will create annual savings of $1.2 billion, largely achieved within the first year and independent of commodity prices, the companies said.

That's bad news for Calgary office workers as about $400 million of the savings are expected to come from "workforce optimization," along with savings from IT and procurement, said Pourbaix, though he did not explicitly say there would be job losses.

"When you combine two companies with similar geographies and somewhat similar operations, you're always going to have some overlap ... in this case, there would probably be relatively a little more weight on the head office functions, just because we aren't quite as overlapping in the field," he said.

He added about $200 million in savings will come from sharing technical expertise and the other $600 million through better use of capital by focusing on assets with higher return potential.

The combined companies are expected to be able to sustain output at about 750,000 barrels of oil equivalent per day for about $2.4 billion a year, 25 per cent less than required separately, Pourbaix said.

Both entities have agreed to support the transaction, which will leave them with about 27.2 per cent of the merged company. They've also agreed to a standstill agreement under which they are subject to certain voting requirements and transfer restrictions for a maximum of five years.

Cenovus owns 50 per cent of two U.S. refineries in Illinois and Texas in partnership with Phillips 66, and Husky owns a refinery in Lima, Ohio, and is a 50-50 partner with BP in a refinery in Toledo, Ohio.

Husky also has an upgrader and asphalt refinery near Lloydminster on the Alberta-Saskatchewan border — which could be used to process Cenovus bitumen in future — and is repairing a refinery in Wisconsin after a fire in 2018.

Peabody said on the call that Husky has decided to cancel spending in 2021 on its partly completed $2.2-billion West White Rose offshore oil project. In September, it said it was reviewing the project while asking for direct investment from the federal government and the province of Newfoundland and Labrador.

The merged company is expected to break-even on a free funds flow basis at West Texas Intermediate pricing of US$36 per barrel in 2021, and at less than WTI US$33 per barrel by 2023.

The transaction has been approved by both boards and is expected to close in the first quarter of 2021, pending shareholder and regulatory approvals.

The combined company's board of directors is to be made up of eight Cenovus appointees and four from Husky.

This report by The Canadian Press was first published Oct. 25, 2020.