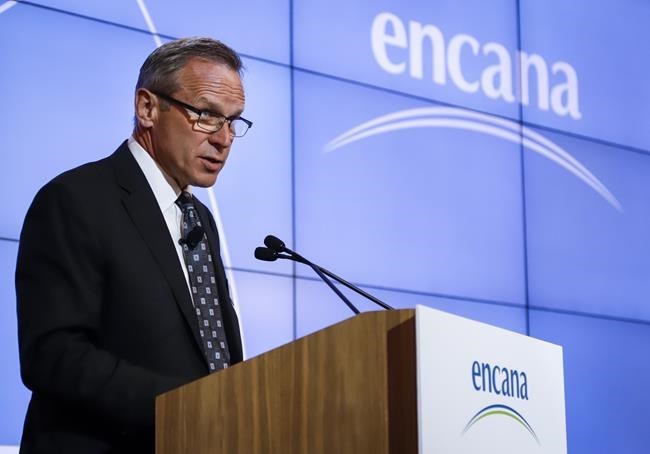 CALGARY — Shareholders in Encana Corp. have voted overwhelmingly in favour of the oil and gas company moving its headquarters to Denver from Calgary and changing its name to Ovintiv Inc.

CEO Doug Suttles says the 90 per cent vote in favour of the resolution shows clear support for the long-standing Canadian company's decision to move its corporate home south of the border, despite public criticism from Encana founder Gwyn Morgan and shareholder Letko, Brosseau & Associates Inc.

Encana announced the changes in October as part of a reorganization that includes a one-for-five share consolidation, also approved by shareholders on Tuesday.

It says a corporate domicile in the United States will expose it to increasingly larger pools of investment in U.S. index funds and passively managed accounts, as well as better align it with its U.S. peers.

Encana has said the changes will not affect how it runs its day-to-day activities in Canada.

The company was created in 2002 through the merger of Alberta Energy Company Ltd., founded in the 1970s by the provincial government, and PanCanadian Energy Corp., the roots of which can be traced back to the construction of the Canadian Pacific railroad.

"With 90 per cent of our securityholders voting 'for' the resolution, there is clearly support for our efforts to expose Ovintiv to the deeper pools of capital in the U.S., capturing the value we know exists within our equity," said Suttles in a news release.

"We will continue to focus on innovation and efficiencies throughout our operations, delivering the financial and operational performance our shareholders expect."

This report by The Canadian Press was first published Jan. 14, 2020.

Companies in this story: (TSX:ECA)

Ex-Alberta legislature member on tax strike over unpaid oilpatch property levies
Jan 22, 2020 12:14 PM
Alberta's privacy commissioner considers investigation into ID-scan at liquor stores
Jan 22, 2020 11:56 AM
Alberta Energy Regulator laying off staff, restructures, deals with budget cuts
Jan 21, 2020 7:49 PM
Comments
We welcome your feedback and encourage you to share your thoughts on this story. We ask that you be respectful of others and their points of view, refrain from personal attacks and stay on topic. To learn about our commenting policies and how we moderate, please read our Community Guidelines.