When Shewfelt won an Olympic gold medal with his floor routine in 2004, it was the first ever Olympic medal won by a Canadian in artistic gymnastics.
Nov 20, 2020 2:15 PM By: Canadian Press 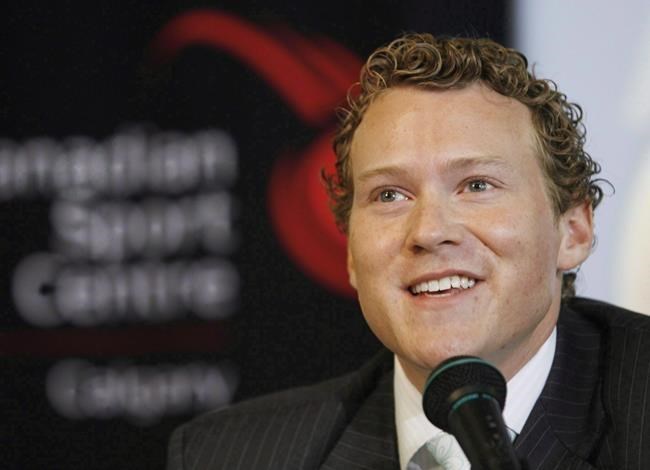 Canadian Olympic gymnast Kyle Shewfelt announces his retirement in Calgary, Thursday, May 21, 2009. Shewfelt is frustrated he's had to close his Calgary gymnastics club to curb COVID-19, while other group activities are allowed to continue. THE CANADIAN PRESS/Jeff McIntosh

CALGARY — Olympic champion Kyle Shewfelt is frustrated he's had to close his Calgary gymnastics club to curb COVID-19 while other group activities are allowed to continue.

The Alberta government shut down indoor group fitness classes and team sports for two weeks Nov. 13-27 in an effort to slow the spread of the virus.

"I've been talking to so many small business owners, program directors and managers of gymnastic clubs and sports clubs and small indoor, fitness facilities," Shewfelt told The Canadian Press on Thursday.

"I think everyone's frustrated because we don't feel that the arrow was aimed at the right target. All of us have been working so hard. I can speak specifically to my facility. We haven't had a single COVID exposure at our facility."

When Shewfelt won an Olympic gold medal with his floor routine in 2004, it was the first ever Olympic medal won by a Canadian in artistic gymnastics.

He opened a gymnastics club in southeast Calgary in 2013 catering to all ages. Shewfelt closed it for the first four months of the pandemic.

The 38-year-old says he diligently followed guidelines and measures in a 16-page government document to re-open in July and has continued to do so.

Operating at 50 per cent capacity, the club was drawing 700 people weekly.

"The thing that really makes me feel disappointed is I know how much of a lifeline this was for kids," Shewfelt said.

"This was their place of joy and a lot of families were just coming here, going to school and we were in their cohort and now it's been taken away."

Shewfelt says he admires Alberta's chief medical officer Dr. Deena Hinshaw, but eight months into the pandemic, he wants to see data that shows closing clubs like his again for two weeks will lower rates of infection.

"I would support a lockdown if it was a full lockdown because I think that would actually get it under control.

"I have little confidence that our facilities are going to be able to re-open in two weeks because are the numbers really going to be low? I don't think so."

An Alberta Health spokesperson countered there have been "several cases" of infection epidemiologically linked to gyms and fitness centres.

"At this time, we cannot give an accurate percentage of these cases," Zoe Cooper said in an email to The Canadian Press.

"As a result, we have taken measures to limit risk in settings where there is a high risk of one case spreading to many."

Shewfelt says he's accessed all government pandemic financial relief available to him as a business owner, yet he's laid off staff.

"This industry is going to be devastated if they keep using us as a scapegoat," Shewfelt said.

"The first thing we did when we found out we had to close again was we turned all the heaters down to save where we could."

Martin Venneri, who operates an F45 Training franchise in Calgary, says the pandemic has reduced revenue by 60 per cent.

"We're staying afloat, but I know a lot of fitness places that have closed and aren't re-opening, which is pretty sad," he said.

"We're happy to be a part of the solution, but where is the data coming from that says boutique fitness studios or gyms in general help cause the spread?"

Closure in the spring and then operating classes at reduced capacity makes a second shutdown devastating, says Leigh-Ann Morris, who owns and operates Summit Martial Arts in the city.

"Heartbroken. We were just sort of getting our momentum back," she said. "We had done all of the things that (Alberta Health Services) had asked us to do.

"Cohorted the kids, closed our change rooms, closed our parents' gallery, everyone signs a waiver and we clean in between every single class. You almost can't believe it."

This report by The Canadian Press was first published Nov. 29. 2020.