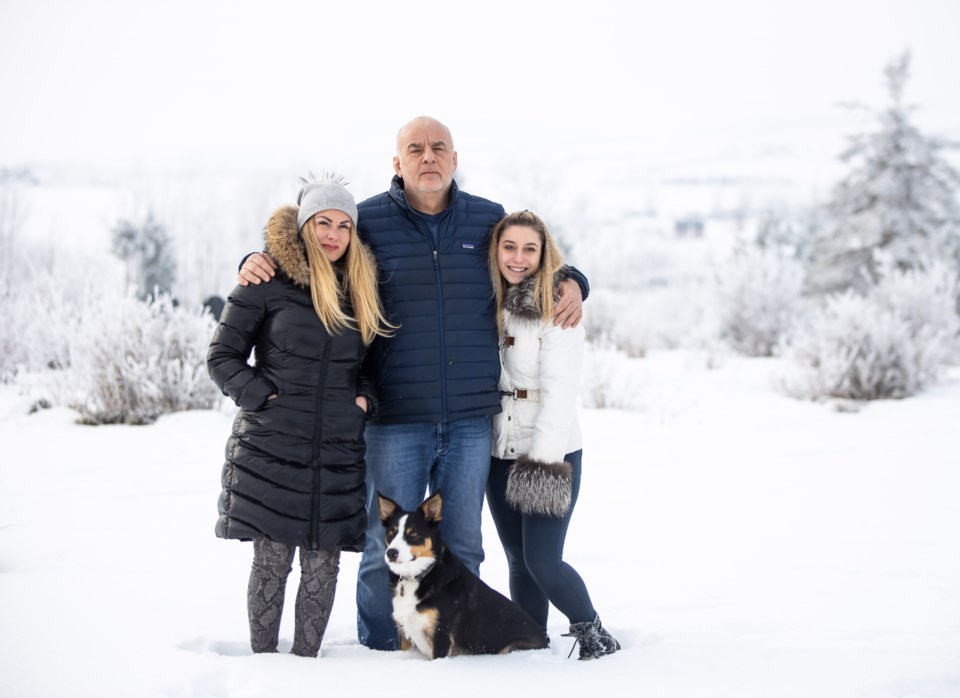 Kitti Toris stands with her guardians, Laszlo and Viktoria Radi and their dog Wilson for a photo at their home near Okotoks on Dec. 13. Toris, who was born in Hungary, is facing deportation after living in Canada for three years with the Radis. She received a letter on Dec. 9 informing her application for a study permit had been denied and that her temporary resident status had expired. (BRENT CALVER/Western Wheel)

A 16-year-old girl who has been instructed to buy a one-way ticket out of the country by Immigration, Refugees and Citizenship Canada, said home is the Okotoks area.

“I believe my home is where my family is,” said Kitti Toris, a Grade 11 student at Holy Trinity Academy. “My home is here. I have been with them for the past 10 years and wherever we have been that has been my home.”

Toris, who was born in Hungary, has been in Canada since 2016 living with her legal guardians, Laszlo and Viktoria Radi. Viktoria is her half-sister.

Laszlo and Viktoria became legal guardians of Toris while living in Hungary. The couple moved to Canada in 2015 and Kitti joined them shortly thereafter. They currently live southwest of Okotoks.

The Radis became her legal guardian in Canada as well. Kitti and Viktoria have been estranged from their mother.

Toris received a letter on Dec. 9, informing her application for a study permit had been denied and that her temporary resident status had expired.

“You are now a person without status in Canada and as such, you are required to leave Canada forthwith,” the letter stated. “Failure to do so could result in enforcement action being taken against you.

“You are required to provide this office with a non-refundable airline ticket forthwith.”

The letter rocked Laszlo and Viktoria and they are in the process of appealing.

Viktoria has permanent resident status and Laszlo is a Canadian citizen. The family has established a home in Okotoks and the Radis own and operate The Heartland Cafe and Restaurant.

“I have been taking care of her for more than 10 years now and she is almost an adult, of course I don’t want to lose her,” said Viktoria.

She said she would go back to Hungary with Toris if her sister is forced to leave. Toris does not have family in Hungary.

Her last study permit expired in the summer of 2018.

Toris reapplied and got notice she wasn’t approved last week.

“We never thought this would happen,” Laszlo said. “I don’t think this is the best interest in the child to send her elsewhere.

“We will file the appeal and there is nothing else we can do.”

“We have been working with the family for the last little while,” Barlow said in an interview. “We looked at a few different options, temporary student visa, compassionate humanitarian designation, it just seems that Kitti falls in a strange gap with the immigration system. I think there is real opportunity for a really strong case for common sense to prevail.

“I did approach the Minister of Immigration yesterday (Dec. 12) providing him with a package documenting Kitti’s case and everything we have done in our office to find a resolution.

“We have asked him to intervene and hopefully he will do that.”

Barlow said his office staff highlighted points that were of concerns with the immigration act.

“I don't think there is any Canadian who would agree to sending a 16-year-old young woman back to, for all intents and purpose, is a foreign country to her where she has no family, no social network," Barlow said. “You can’t just have a 16-year-old girl walk off the airplane in Budapest and then what?

“She has a very stable situation in Okotoks, their family owns a business, they are not a burden on the social system in Canada. I think this is just a straight case of common sense… If we find a gap in the system let’s address, in the meantime find a way for Kitti to stay.”

Ironically, Laszlo, who came to Canada in 1986 from Hungary was asked to leave the country shortly after the Iron Curtain fell in 1989.

He said a media campaign helped him get the proper documentation.

Meanwhile, Toris is waiting for what she hopes is a positive outcome.

“I couldn’t believe it,  I didn’t think it would ever happen to me, I thought everything was going fine, but here we are,” Toris said. “I am lost and I am confused and speechless.

“I am pretty scared, I have no idea what is going to happen.”

A petition has been started to keep Toris in Canada at www.change.org/p/immigration-refugees-and-citizenship-canada-keep-kitti-in-canada