U of A planetary geologist Chris Herd, one of a select team of scientists working with NASA, will be monitoring the rover and tell it when to sample.
Feb 18, 2021 12:45 PM By: Canadian Press 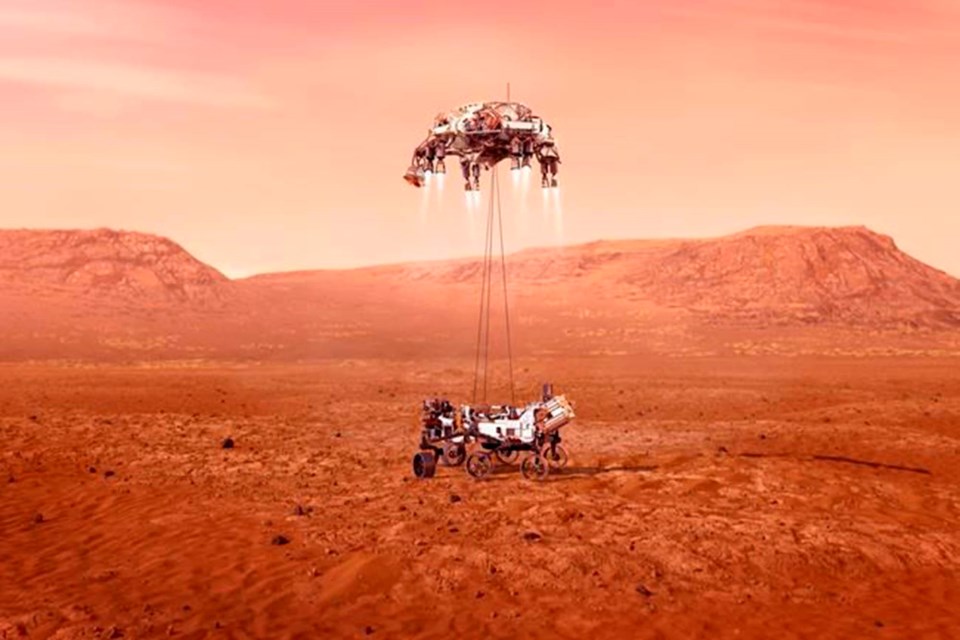 This illustration provided by NASA shows the Perseverance rover, bottom, landing on Mars. Chris Herd will be in his Edmonton living room on Thursday but his heart will be on Mars. The University of Alberta planetary geologist is one of a select team of scientists working with NASA on the Perseverance Rover, a probe designed to eventually bring back rocks from the Red Planet that could reveal signs of life.THE CANADIAN PRESS/AP, NASA/JPL-Caltech

EDMONTON — Chris Herd plans to be in his living room in Edmonton today but his heart will be on Mars.

The University of Alberta planetary geologist – one of a select team of scientists working with NASA – hopes to watch the successful touchdown of the Perseverance Rover, a probe designed to eventually bring back rocks from the red planet that could reveal signs of life.

It's 204 million kilometres to Mars. Herd says that's about the size of the scale needed to measure his excitement.

"Somewhere up near the top of that."

"It'll take my mind of things, hopefully. I might get a good night's sleep. We'll see."

He admitted the ball was likely to remind him of a certain planet.

Perseverance, launched last June, is to land on the Jezero Crater – just north of the Mars equator, drill into the surface and take between 20 and 35 core samples up to 10 centimetres long.

The rover will stash those samples on the surface. As early as 2026, another rover is to retrace Perseverance's journey and retrieve the samples for eventual return to Earth, perhaps by 2031.

Herd's job, together with his colleagues, will be to monitor the rover and tell it when to sample.

Careful measurements of the immediate environment around the core are also to be taken.

Perseverance will be able to send much information back on its own. It has 23 cameras to record everything about the landscape and an on-board laser that can vaporize rocks and analyze their makeup.

Perseverance will be able to detect organic matter in the rocks and will carry ground-penetrating radar. Scientists will be looking for evidence recorded in the rocks of environments that could have been habitable.

Mars is thought to have had water at some time in the distant past. About 3.5 billion years ago, that all vanished.

Jezero was chosen because it's thought to be an ancient lake bed. If there was life on Mars, lake sediments or a long-ago shoreline could be a good place to look for signs.

Until the images and data start returning to Earth, though, Herd will be watching and waiting like everyone else.

He will be on an online link with his scientific colleagues.

"We will have a private social event. We'll be able to congratulate people."

This report by The Canadian Press was first published Feb. 18, 2021.