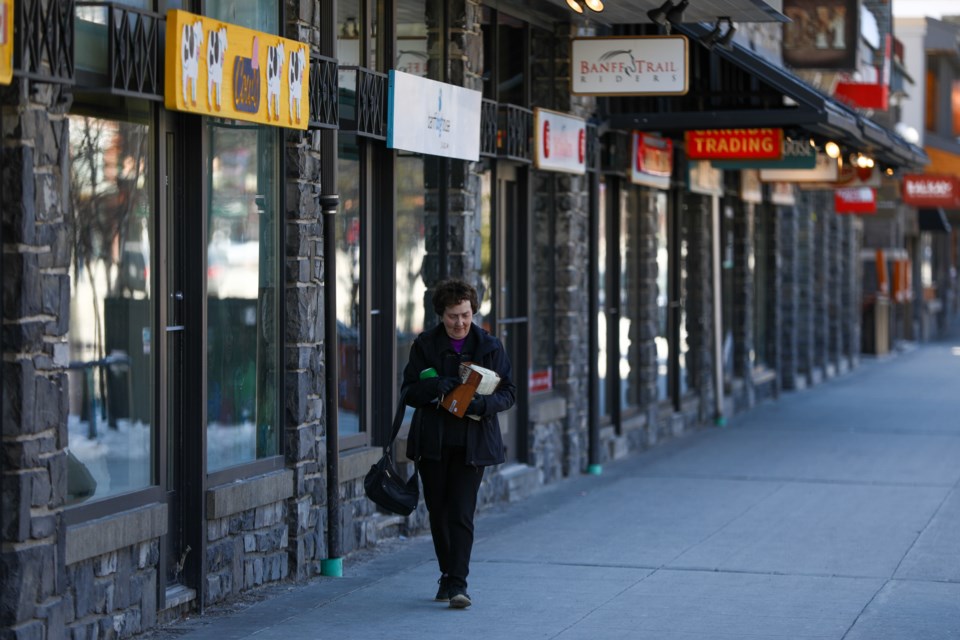 A woman walks along an empty Banff Avenue during the COVID-19⁠ pandemic. EVAN BUHLER RMO PHOTO⁠

BANFF – Day-trippers continue to flock to the Banff townsite despite strong advice from the province’s top medical officer for Albertans to stay away from mountain tourist communities for now.

About 225 vehicles with visitors from the Calgary region were turned around at the two checkpoints into the townsite on Saturday (May 2) – about double the daily number seen in previous weeks during the COVID-19 lockdown.

With the Alberta government opening up provincial parks last weekend and announcing a staged re-launching of the economy beginning on May 14, Town of Banff officials say there was confusion about whether national parks were also open.

“The overwhelming response we received from the day-trippers that came up was that they thought all parks were open, not just provincial parks,” said Silvio Adamo, the Town of Banff’s director of emergency management.

“We had to remind them that we are in a national park and all the services are still closed. People were very understanding and we didn’t have any confrontations.”

Last Friday (May 1), the Alberta government opened provincial parks and public lands back up to visitors, by reopening vehicle access to parking lots and staging areas as an early phase in its economic relaunch strategy.

But with the relaunch strategy also recommending against non-essential travel, Dr. Deena Hinshaw, Alberta’s chief medical officer of health, was quick to make some clarifications on social media.

“Domestic non-essential travel is still not recommended. This will not change until stage 3,” she said, noting she had been getting several questions about the COVID-19 relaunch strategy and travel.

“Now is not the time to visit mountain communities for the weekend. Further, national parks are closed.”

I’ve received questions about the #COVID19AB relaunch strategy and travel. Domestic non-essential travel is not recommended. This will not change until stage 3. Now is not the time to visit mountain communities for the weekend. Further, national parks remain closed to visitors.

Banff’s checkstops aim to stop the spread of COVID-19. So far in Banff National Park, five cases have been reported, including four patients that have recovered and one case that remains active.

Parks Canada is also asking visitors to stay away from Banff for now, with camping, group activities and events at all Parks Canada places across the country suspended until at least May 31.

“Parks Canada is aware of the announcement by the government of Alberta regarding the opening of provincial parks and campgrounds, however the agency’s current closures at national parks remain in place until further notice,” she said in an email.

Damini said Parks Canada is working with the Town of Banff and tourism organizations in Banff National Park on the best approach to resume services, which will take time and be done in stages.

“We look forward to reopening our sites once the appropriate measures are in place to ensure the health and safety of Canadians, visitors and Parks Canada team members,” she said.

Come May 14, some businesses can begin to reopen under the province’s first phase of its economic relaunch strategy, including retail businesses like clothing stores, and some personal services like hairstyling and barber shops.

In addition, cafés, restaurants, pubs and bars can reopen for public seating at 50 per cent capacity, but people will not be able to go to the bar to order drinks; they will need to be served at a table.

With the provincial government restricting attendance at all large events and festivals for the summer, and limits on all gatherings to fewer than 15 people, the Town of Banff has also cancelled its July 1 Canada Day festivities, including the parade.

Mayor Karen Sorensen said she understands many people will be disappointed, but noted this decision shouldn't come as a surprise because public safety is the municipality’s No. 1 priority.

“It would be irresponsible to host events and programs that would bring groups together and likely involve people within two metres of each other,” she said.

Sorensen said Banff looks forward to being able to welcome back visitors when the time is right and it is safe to do so.

“We need to remind everyone, especially our neighbours across the province, that the government of Alberta has emphasized that non-essential travel is still not recommended, including travel within Alberta,” she said. “That will be in place until the third stage of the relaunch strategy.”

Meanwhile, in neighbouring provincial parks, not all services, such as washrooms and garbage pick up, will be open right away as Alberta Parks ramps up staffing. Reservations for camping open on May 14, with a plan to open provincial campgrounds June 1 at 50 per cent occupancy. Only Albertans can book campsites, with no out-of-province campers allowed at this point.

Jess Sinclair, press secretary to Alberta Environment and Parks Minister Jason Nixon, said visitors to provincial parks are asked to respect the land, pack out what is brought in and leave everything as it was found.

Recognizing people want to get outside, she said all visitors to provincial parks and public recreation lands are encouraged to follow all public health guidelines on social distancing and gatherings as the COVID-19 pandemic continues.

“Although we’re easing restrictions, we really need everyone’s cooperation to ensure we don’t have to bring them back,” said Sinclair in an email.

“The last thing we want to do is re-impose restrictions on outdoor recreation – so plan ahead, and if the parking lots look full, come back later or visit another day.”