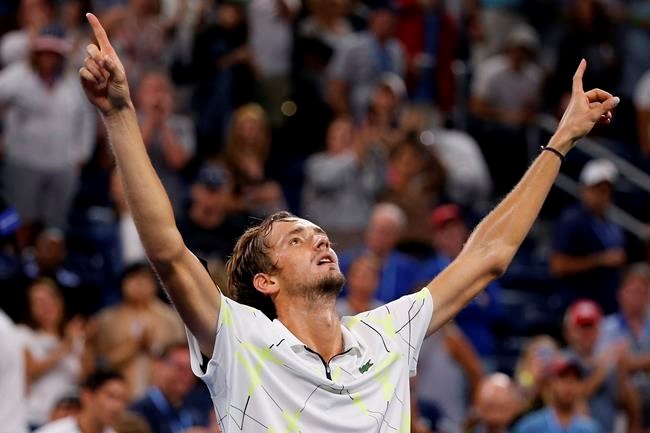 Andreescu's 7-6 (3), 7-5 win over Switzerland's Belinda Bencic Thursday night put her in the final against the 37-year-old Serena Williams, who will be trying to win her 24th Grand Slam title and tie the all-time record held by Australia's Margaret Court.

The 19-year-old Andreescu is looking for the first major title of her career, in her first US Open main-draw appearance. It would also be the first-ever Grand Slam singles title by a Canadian.

"A lot of emotions are running through my body right now. A lot of thoughts, too. But right now I'm just trying to take in the victory," said Andreescu. "Hopefully I can just keep the momentum going for the finals. Hopefully I can play a little bit better than I did today."

The match will be a bit of unfinished business. Williams and Andreescu played each other for the first time in last month's Rogers Cup. But after just four games, Williams was forced to retire due to back spasms,

That handed Andreescu her second WTA title of the season and made her the first Canadian to win the tournament since Faye Urban of Windsor, Ont., beat Vancouver's Vicki Berner in 1969.

The Mississauga, Ont., native is the first to reach the final in her maiden US Open appearance since Serena's sister Venus did it in 1997, when she was 17.

Serena Williams, who already has six US Open titles, won her first in 1999 as a 17-year-old — before Andreescu was born.

"She really knows how to mix up the game and play different shots in different ways. Above all, I just like her as a person. She's amazing," Williams said of Andreescu.

Williams needed just 70 minutes to dispatch No. 6 seed Elina Svitolina of Ukraine 6-3, 6-1 in the first semifinal.

There wasn't a single break-point opportunity for Andreescu in the first set of the semifinal, which lasted nearly as long as Williams's entire match and went to the tiebreak. She defended all six of Bencic's break-point chances in the set.

But she had some momentum going into the tiebreak, and took it.

The second set was a completely different story.

Bencic upped the velocity on her groundstrokes and moved Andreescu around the court. The Canadian was looking tired, despite the much cooler temperatures for this semifinal compared to the stifling humidity Wednesday night for her quarterfinal win over Elise Mertens of Belgium.

Andreescu was mixing in the occasional drop shot, high looping ball and forehand slice. But Bencic didn't seem to have much trouble with any of the changes of pace.

It seemed destined to go three sets when Andreescu trailed by two service breaks at 1-4 and then at 2-5.

Seemingly leg-weary, but fairly calm on the outside, Andreescu turned it around. Bencic attempted to serve out that second set twice.

And both times, her serve was broken.

"Whenever my back is against the wall, I think I'm just extra focused in those moments," Andreescu said. "I remember I told myself at 5-2 that I didn't want to go to three sets. So I think just that switched my mindset."

It all turned when Bencic served at 4-1 in the second set. She helped Andreescu's cause by double-faulting twice in that game to lose her serve, and start Andreescu's comeback.

"I think it wasn't too fun playing her. But that's what makes her such a great player," Andreescu said. "I tried to change the rhythm as much as possible. But it wasn't easy. When someone is hitting flat and deep, it's hard to do that.

"But the main reason I won today I think is because I just kept fighting. I never let up. In the second set I felt her kind of get tight at 4-1. I fed off of that. I just kept going for my shots," she added.

Suddenly, Bencic was serving just to stay in the match. She couldn't do it.

"I think she has a clear game style pattern with the spinning forehand, then like cutting into the court. I think we both play similar on this," Bencic said.

"I had little bit of a struggle on the returns today. I couldn't read her serve as well. I think that's, like, credit to her serve. It maybe (doesn't) look spectacular, like from (Naomi) Osaka, but I think it's very effective, smart, variation on the placement. I think that gave me a hard time which was maybe also a little bit of the difference."

Note to readers: This is a corrected story. A previous version incorrectly stated Bencic had no break-point chances in the first set.