Dairy Farmers of Canada is encouraging its members to find alternatives to palm supplements in cattle feed as a working group looks into consumer concerns that butter has become harder.
Mar 1, 2021 3:45 PM By: Canadian Press 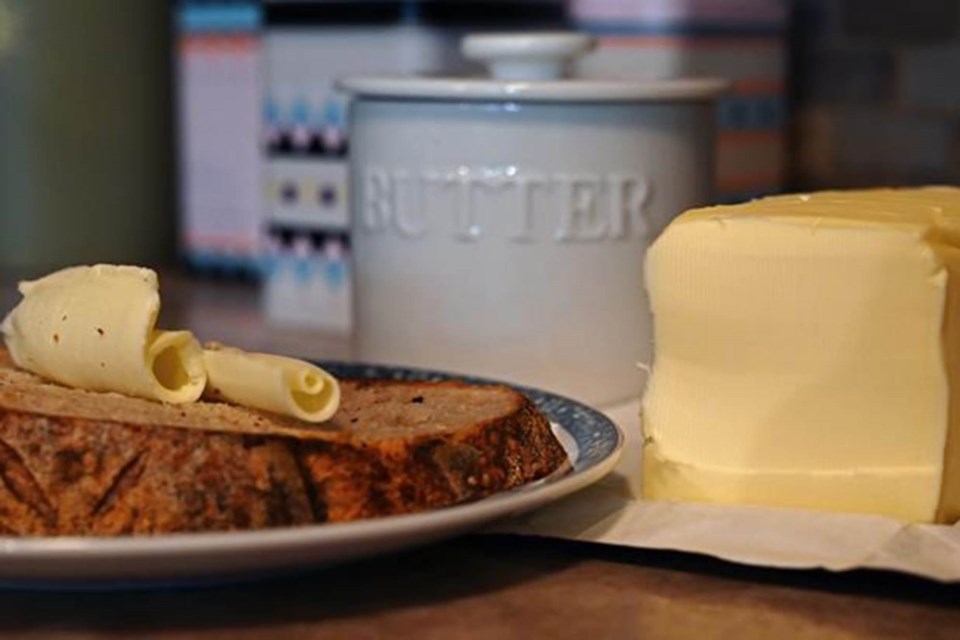 Butter and sourdough bread is shown at a house in Vernon, B.C. on Feb. 24, 2021. A Quebec dairy farmers' group is calling on milk producers to stop feeding palm oil or its derivatives to livestock as controversy churns over how these supplements affect the consistency of butter. THE CANADIAN PRESS/Jesse Johnston

Last week, The Canadian Press reported a dairy producers' lobbying group had asked farmers to consider alternatives to palm supplements in livestock feed pending the results of an investigation launched in response to consumers' concerns about perceived changes to the consistency of butter.

At the centre of the churning controversy, which some have dubbed "buttergate," is Calgary food writer Julie Van Rosendaal, whose investigation into the issue has garnered international media attention.

Van Rosendaal said her deep dive into the dairy sector began in her own kitchen, when she noticed that it seemed to be taking longer for her butter to soften.

David Christensen, a professor emeritus of animal and poultry science at the University of Saskatchewan, said if the consistency of butter has changed, the use of palm supplements could be a contributing factor.

"Canadian dairy are going to do better," chair Stuart Boeve said in a statement last Thursday.

Experts say that a new directive issued in response to the controversy known as "buttergate" could make it hard for dairy farmers to keep up with consumer demand for the staple ingredient.

Dairy Farmers of Canada is encouraging its members to find alternatives to palm supplements in cattle feed as a working group looks into consumer concerns that butter has become harder.

The recommendation comes after media reports linked the purported change in consistency to the common practice of bolstering cows' diets with palm byproducts, which federal authorities have approved as a safe ingredient in livestock feeds.

Animal science experts say there's no feed supplement that's as efficient or economical as palmitic acid, and warn that ruling it out could come at a cost to dairy producers and lead to an increase in butter imports.

While some dairy farmers are looking into alternative feed supplements, others say they're sticking with palmitic acid because it's best for their cattle and their bottom lines.

Daniel Lefebvre of Lactanet, which advises Dairy Farmers of Canada, says while buttergate is based on "unfounded claims," a turn in public perception poses a greater threat to the dairy industry than asking farmers to eliminate a safe and effective method to maximize production.

This report by The Canadian Press was first published March 1, 2021.