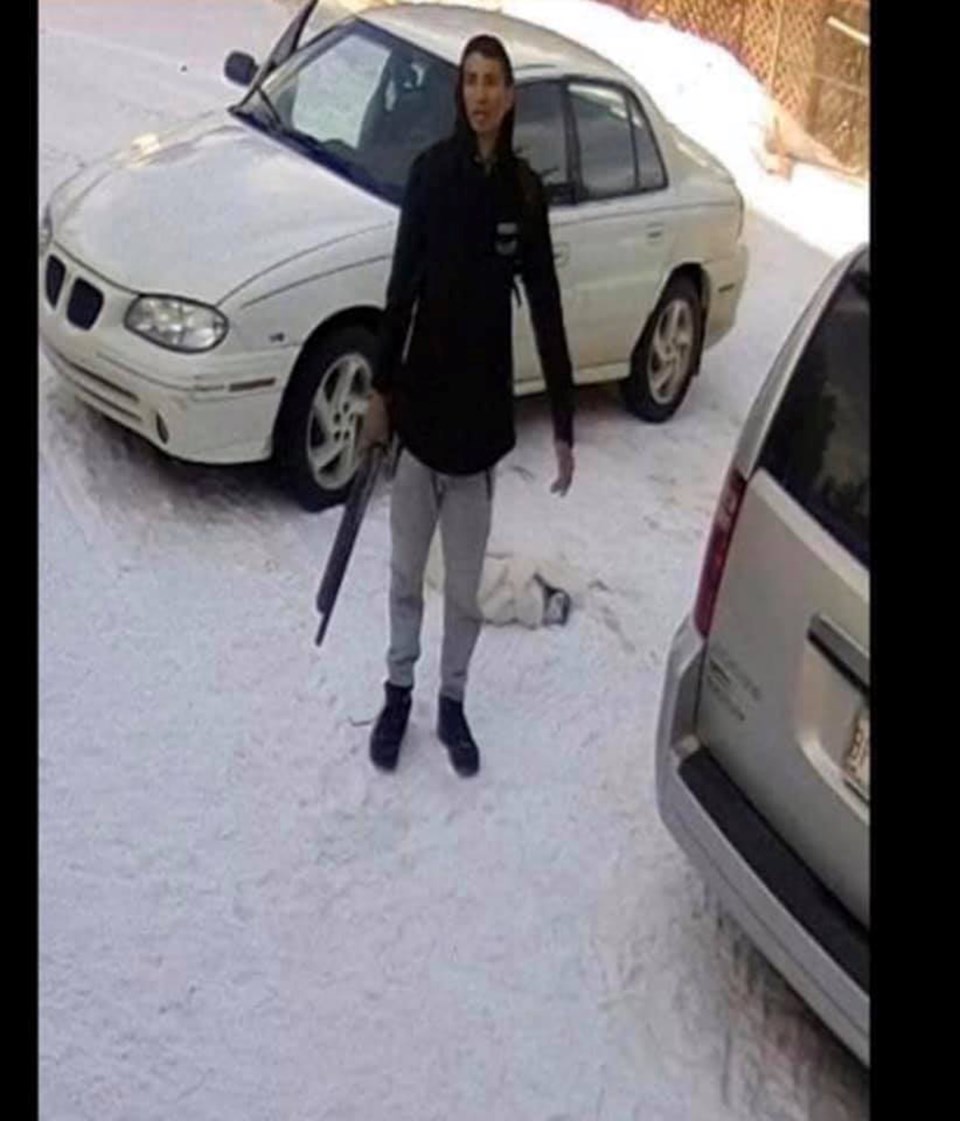 A 27-year-old man, pictured here via a surveillance camera, faces 40 charges following a Dec. 30 incident near Half Moon Lake.

WESTLOCK – A 27-year-old Edmonton man is in police custody following a Dec. 30 incident near Half Moon Lake where he allegedly pointed a sawed-off shotgun at a man while he was trying to rob his home.

Redwater RCMP were called to the scene near Half Moon Lake, about 40 kilometres east of Westlock, at approximately 1 p.m., in response to a suspicious male trespassing on a rural property.

“While the members were responding to the call for service, additional 911 calls came in that the suspect had now confronted multiple homeowners with a sawed-off shotgun. He was trying to steal a vehicle,” said Redwater RCMP Cpl. Mark Joy on Dec. 31.

Additional units were then deployed, Joy said, including members from Westlock and Morinville detachments as well as a helicopter and canine unit from Edmonton.

Family members of the homeowner told the Westlock News following the incident that the man entered his home and walked right by the suspect, who was hiding behind the door. He then exited the home, but was seen by the homeowner’s friend and the two went to investigate, at which point the suspect came out from behind a car, pointing the shotgun at both of them and demanded the keys to the car.

“He had it on dad’s friend first, because dad was still in the cabin. He wanted the keys but dad’s friend told him he didn’t have the keys. Dad then came outside and he pointed the gun at him,” said the man's daughter, who wished to remain anonymous.

The homeowner was able to talk the suspect into lowering the firearm, but told him he could not provide the keys as the vehicle was not his.

“Dad said he was calm and collected and told him he didn’t need the gun. The guy then said he didn’t steal anything from the house and dad said ‘That’s OK,'" she said, while praising RCMP for their quick response time.

The suspect then fled on foot to a neighbouring property, where RCMP said he pointed the gun at several other property owners before he was apprehended.

The suspect was eventually successful in stealing a vehicle, but crashed it soon after and attempted to flee on foot into a thick brush area, said Joy.

“Containment was set up and the police dog and emergency response team tracked and located him and he was arrested.”

About the Author: Chris Zwick