Fighting to save Chain Lakes

Athabasca community members band together to save the campground
Jul 30, 2020 1:15 PM By: Heather Stocking
Previous Next
Chain Lakes Provincial Recreation Area, 43 kilometres northwest of Athabasca is scheduled for a partial closure and to be privatized so local residents are preparing to fight back with a petition and awareness campaign. T&C Staff
Expand

ATHABASCA – On March 3 Alberta Parks announced the full or partial closure of 20 provincial parks and contracting out of 164 sites and when the pandemic hit just days later it seemed to disappear from the news cycle.

Not so for a group of people from Athabasca who have banded together to try and save at least one of the three provincial parks in the greater Athabasca area from partial closure of the campground – Chain Lakes Provincial Recreation Area located 43 kilometres northwest of Athabasca.

Cecile Fausak and Bruce Jackson hosted an online meeting July 15 to get input from other people in the area who are concerned about the closures and six people joined them.

“I live here at Chain Lakes and that's been our swimming hole here long before the government actually gave us some form of protection and local people still regard is their favorite swimming spot,” said Harvey Scott who participated in the meeting.

Scott said he feels the government decision is coming from people who gave no thought to ecological impact and are looking strictly at money. The government estimates the move across the province will save tax payers $5 million annually.

"This over handed approach of people who really seem to have no appreciation for nature, just declaring this whole collection of wonderful little ecological spots null and void without any consultation and these people do not have the ecological education, do not know what they're losing when they're declaring null and void. I'm angry about this. I think this is ill thought out. It's an ideological sort of attempt to strike a few things off the books, make a little money out of it,” he said.

Rosemary Neaves has a farm near Chain Lakes and is also worried about the impact the partial closure and privatization could mean.

“I think I was just so shocked with the scope of the sweep of sites across the province and checking off one place after another it was extremely shocking to me and very sad. I have a farm out near Chain Lakes and it's been a part of our backdrop for a long time. To have that suddenly over the chopping block; there is nothing that explains this decision to me other than a few dollars ... but it will never ever be able to be replaced in terms of natural habitat for birds and animals and people,” Neaves said.

Cecile Fausak said while researching the closures that it makes no financial sense for the government to close or privatize the parks.

“I'm just sort of outraged at the scope in doing this without any consultation and as I've delved into it more and more and seeing what CPAWS and the Alberta Wilderness Association has presented it is more and more disturbing that there's just such a lack of data and understanding of why would this make any economic sense, let alone in terms of the environment,” she said.

Scott reminisced of a time before the first parks were closed, when small sites dotted the highway and fears more closures eat at the heart of the province.

“Traveling in Alberta 20-30 years ago our family used to be able to stop at places like Vimy Lake, a little campground there and go to the bathroom and have a drink of water and during the (Premier Ralph) Klein era those were all just wiped off the map and a little bit of humanity this province had has been eliminated,” Scott said.

The group will be posting information at Chain Lakes to encourage campers to take part in the #IUseAlbertaParks social media campaign as well as setting up at both the campground and various locations in the town of Athabasca to gather signatures for a petition.

For more information you can contact them by email at [email protected]. 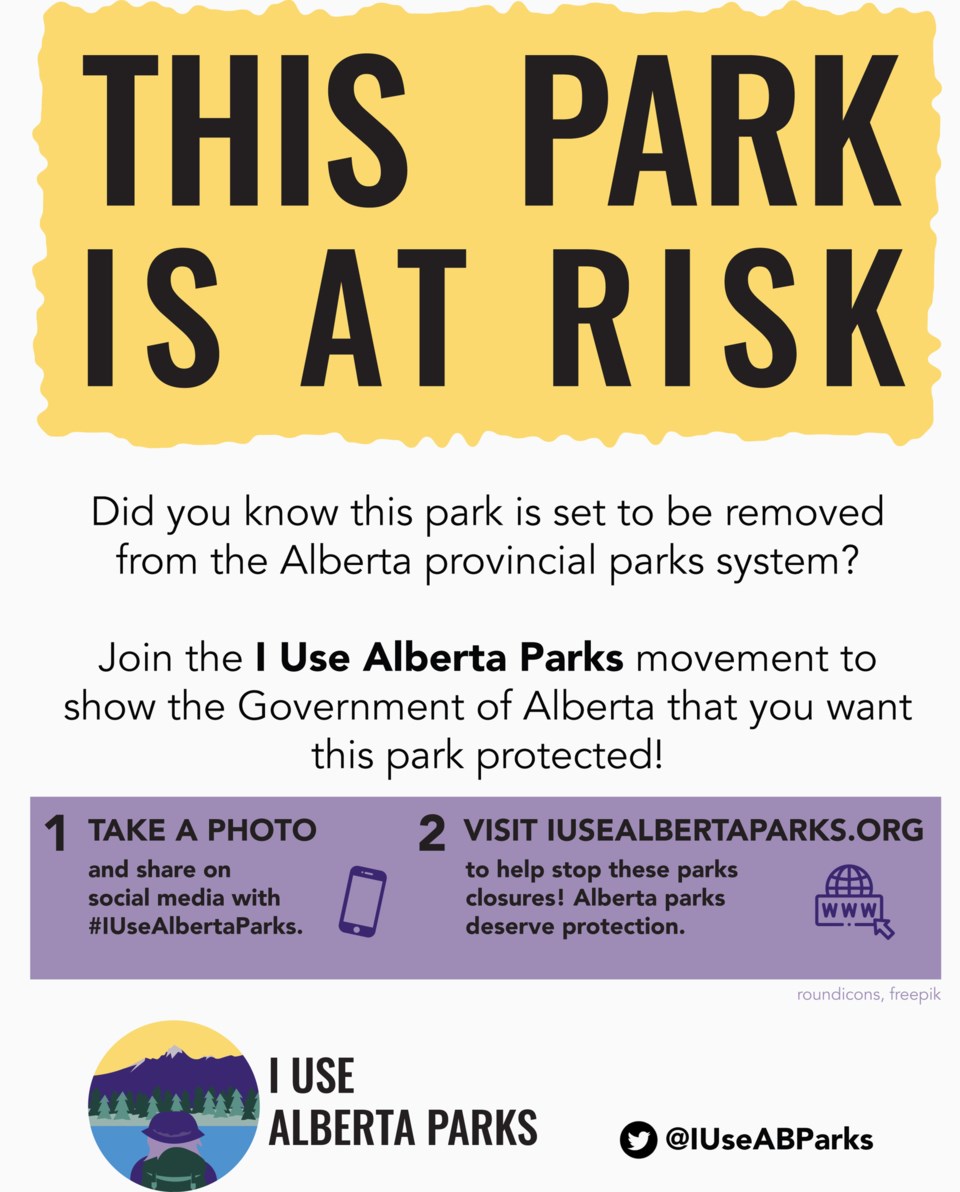