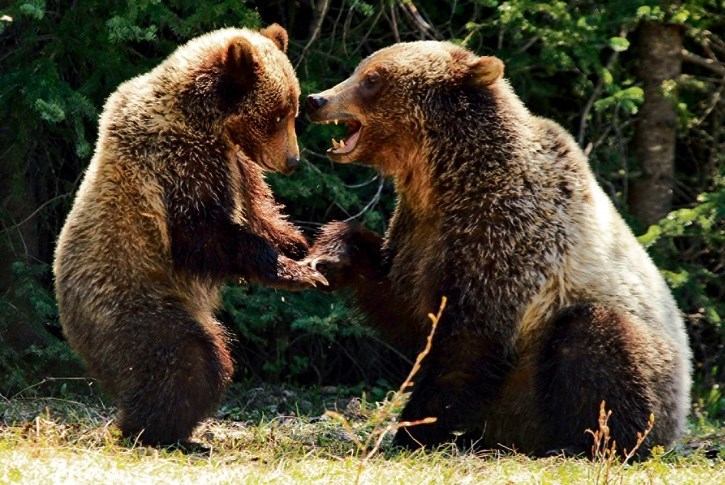 A female grizzly bear with a cub. RMO FILE PHOTO

BANFF – Several mama grizzly bears in Banff, Yoho and Kootenay national parks have given birth to cubs this year.

Parks Canada officials say this is positive news, particularly because grizzly bears have one of the slowest reproductive rates of all North American mammals, and that rate is even lower for grizzlies living in the Canadian Rockies.

“Typically, we have about 20 females with dependent young throughout Banff, Kootenay and Yoho,” said Jesse Whittington, a wildlife ecologist with Banff National Park.

“In any given year there’s roughly four to six females that have young-of-year cubs.”

In the eastern end of Bow Valley in Banff, Parks Canada knows of at least one mama grizzly bear with two new cubs. However, there are other grizzly bear family groups with older offspring also in the area.

“People saw this bear for a few days and then it disappeared,” Whittington said. “The bear has been relatively reclusive and has not been coming into populated areas.”

While this female grizzly bear has no markings or ear tags, there is a chance she may have once been collared as part of the Parks Canada-Canadian Pacific Railway joint study on grizzly bear mortality from 2012-16.

“It could be one of those bears, but at this point we just don’t know,” Whittington said.

“There’s a couple of females like 160, who was 148’s sister, and another potential bear was 130, who lost her previous offspring.”

At least two other mama bears showed up with newborn cubs this spring.

Bear No. 143 has two young-of-year cubs, including one brown coloured cub with a white head.

The other report is that bear No. 156, who is the mother of the three-and-a-half-year-old white grizzly bear in Yoho National Park, has produced cubs again this year.

“We haven’t actually seen any photos or seen them ourselves, but we have had a couple of reports, which is great news,” said Jon Stuart-Smith, a human-wildlife coexistence specialist for Lake Louise, Yoho and Kootenay.

“The area she was seen with these cubs would make sense that it would be her.”

Bear No. 143’s sibling, bear No. 142, has one two-and-a-half year-old cub. Bear No. 136, nicknamed Split Lip for his disfigured mouth, killed and ate her other cub near Morant’s Curve along the Bow Valley Parkway earlier this spring.

Bear No. 142 spends most of her time around the busy Lake Louise area for now, whereas Bear No. 143, on the other hand, appears to be the more wary of the two nine-year-old siblings.

Stuart-Smith said bear 143 typically is spotted only a few times in spring, but is not seen often after that.

“Possibly this year it’s because of the snow in the high country still, and green vegetation in the lower valleys,” he said.

“Also the fact that she has young cubs might be another reasons why she is in the valley bottoms.”

This is bear 143’s second set of cubs. She had cubs two years ago at the same year as her sibling 142 did.

“They both had their first litter at the same time in 2018,” Stuart-Smith said. “143 seemed to have lost that first set, but we don’t know what happened.”

Parks Canada, which uses remote cameras to monitor the grizzly bear population throughout Banff, Kootenay, and Yoho national parks, says there may be more cubs born to female grizzlies in more remote backcountry areas of the parks.

Whittington said some female bears will hang out in higher elevation areas where they’re unlikely to encounter larger male bears and where cubs are safer from predation.

He said an overall tally on the number of females with young-of-year cubs likely won’t be known until Parks Canada analyzes images from its network of remote cameras.

“We can look at individual family groups throughout Banff, Kootenay and Yoho national parks, identify individuals and the number of offspring,” he said.

“We haven’t pulled together last year’s data to estimate what those trends are, but that’s something we’re looking forward to doing this winter.”

The breeding season for grizzly bears is drawing to a close here.  Female bears experience delayed implantation, meaning the embryo does not implant in the uterus until November or December – and only if the bear has enough fat reserves.

Female bears going into the den leaner than normal in the fall may emerge in the spring with fewer or smaller cubs, which when born in the den early in the year, typically weigh about half a kilogram.

Cubs typically remain with their mothers for at least three years, and during this time, the protective mama bear nurtures and educates her young on where to eat and how to navigate the region.

Natural mortality is highest for young-of-year cubs, and although adult male bears are known to kill cubs on occasion, their early deaths are usually related to nutrition, according to Parks Canada.

Whittington said grizzlies here have lower reproductive rates than in neighbouring British Columbia where there is more food, adding bears here often tend to weigh less, and cubs sometimes stay with their mothers longer than in other areas.

“We’ll often find females with their dependent young until the young are about three-and-a-half years old,” he said.

“Females, if they have successful litters that survive, they tend to have young every four years.”

The challenges of  surviving in a busy and developed national park, combined with the low reproductive rates, means it’s vital to reduce human-caused mortality of grizzly bears, which are considered a threatened species in Alberta.

Bears that survive to become mature adults can live 20 to 30 years in the wild; however, most die human-caused deaths at an earlier age.

“We think our population is healthy for the quality of habitat we have, but it emphasizes the importance of minimizing our effects on grizzly bears in this area because their population is more susceptible to mortality,” Whittington said.

“Grizzly bears have lower reproductive rates and their young face high mortality rates like lots of other species, and so their survival is really important to the population trend.”

According to Parks Canada’s website, there are an estimated 65 grizzly bears in Banff, 109 in Jasper, 11-15 to Yoho and nine to 16 in Kootenay. Many of these bears, however, do not spend their entire lives within the parks.

Banff National Park is working with other parks from Jasper to the north to Waterton Lakes to the south to look at efficient ways to monitor grizzly bear trends with remote cameras.

“We’re really looking forward to seeing what things we can learn about species distribution, number of bears and trends,” Whittington said.