DEBOLT, Alta. — Four people who died in a helicopter crash on New Year's Day were identified by loved ones Sunday as members of a strong and loving farm family from a tight-knit community in northern Alberta.
Jan 4, 2021 11:45 AM By: Canadian Press 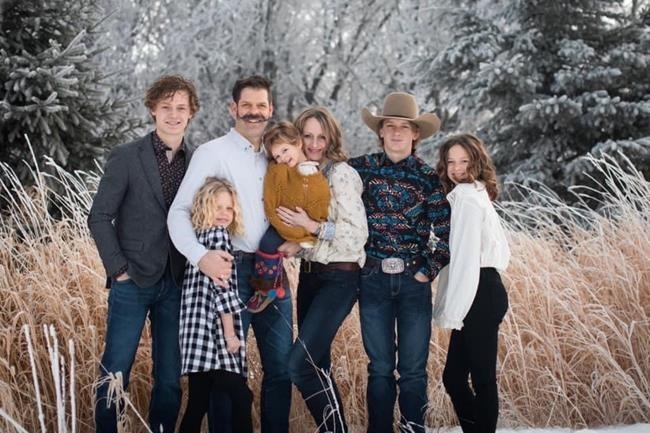 Members of the Balisky family, left to right, Chevey, Jewel, Wade, Fleur, Aubrey, Remington, Indya are shown in this handout image. Four people who died in a helicopter crash on New Year's Day are being identified by loved ones as members of a strong and loving farm family from a small community in northern Alberta. The families of Wade Balisky, 45, and Aubrey Balisky, 37, say in a joint statement that they are grappling with the loss of the couple and two of their children, Jewel, 8, and Fleur, 2.THE CANADIAN PRESS/HO

DEBOLT, Alta. — Four people who died in a helicopter crash on New Year's Day were identified by loved ones Sunday as members of a strong and loving farm family from a tight-knit community in northern Alberta.

The families of Wade Balisky, 45, and Aubrey Balisky, 37, said in a joint statement they are grappling with the loss of the couple and two of their children, Jewel, 8, and Fleur, 2.

The family said Wade and Aubrey are survived by their three other children, Chevey, 16, Remington, 14, and Indya, 12.

"We have been devastated by our sudden loss of Wade, Aubrey, Jewel and Fleur," the Balisky and Warkentin families said in the statement.

"Chevey, Remington and Indya will need your prayers, love and support as they grapple with the loss of their father, mother and sisters. They know that they were loved and are loved."

The family lived together on a ranch in the small farming hamlet of DeBolt, Alta., about 45 kilometres east of Grande Prairie.

RCMP have said first responders received an emergency signal from a Robinson R44 helicopter and arrived to find the aircraft crashed in a field in nearby Birch Hills county with no survivors.

The cause of the crash is under investigation.

Chris Warkentin, Conservative member of Parliament for Grande-Prairie-Mackenzie, said he was close with his cousin Aubrey and he grew up in the same neighbourhood as Wade, whom he described as an "experienced pilot."

"The families are very, very close," he said. "It goes back a couple of generations, at least a generation or two that our families have known each other."

Warkentin said the helicopter crashed on a property jointly owned by Aubrey's father and his own father, which he believed was "totally coincidental."

The family said in the statement that Wade and Aubrey loved their extended family, friends and neighbours.

"The coffee was always on at their farm and their door was always open. They made strangers into friends at an alarming rate and made a priority of keeping those relationships meaningful," the statement said.

The couple shared a deep Christian faith and would have celebrated their 20th anniversary on Jan. 19.

Wade Balisky was someone who found great joy in sharing with Aubrey Balisky and their kids his love of farming, flying, snowmobiling, river boating, travel and play, they said.

"Wade loved his family and took every opportunity to share his joy of life with them."

Aubrey Balisky's children were her constant delight. She had longed for each child before they were born and also cherished being a wife, artist and photographer, the family said.

She woke up every morning excited to do "absolutely everything," they said.

"She was a constant encouragement to her family and friends."

Aubrey Balisky called Jewel her "Honey Bee" and the eight-year-old found beauty in everything and everyone she encountered, the family said.

"Jewel was... our jewel. She brought colour and vibrancy wherever she went."

Fleur’s middle name was Treasure, and the two-year-old was truly the treasure of the family, they said.

The Balisky and Warkentin families thanked everyone for their support.

"We also want to express our love for those who mourn with us. Many of you were considered family by Wade and Aubrey and their family, you share in our loss."

This report by The Canadian Press was first published Jan. 3, 2020.