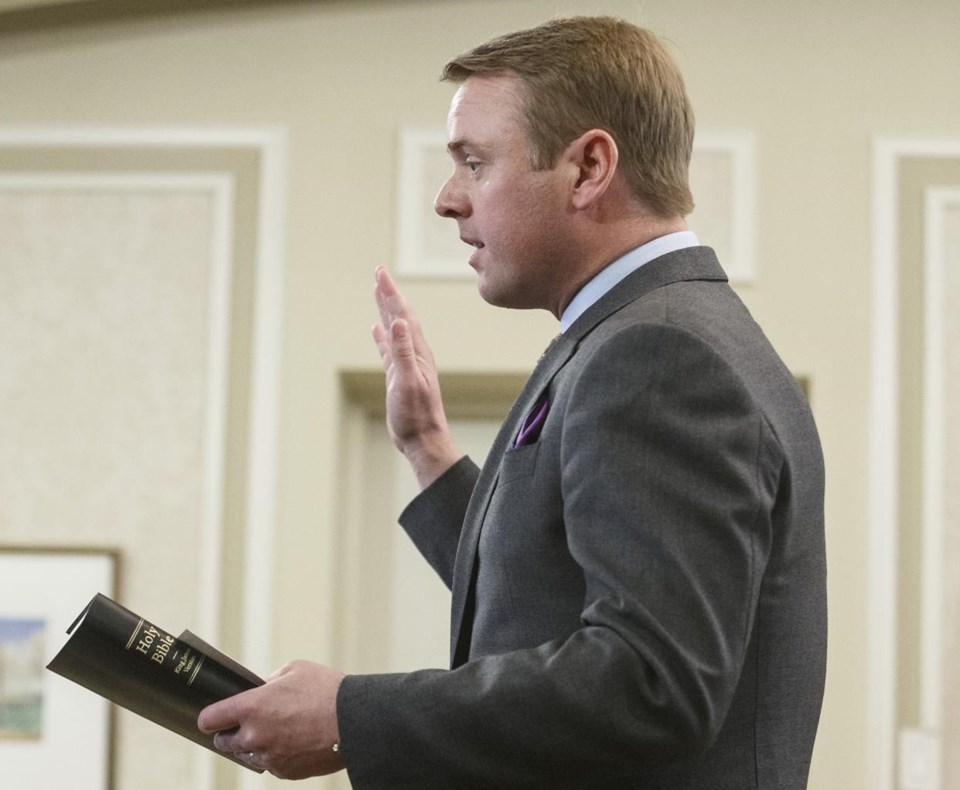 EDMONTON — Health Minister Tyler Shandro is getting an earful from Alberta doctors — current and future — for ending the government's master agreement with physicians and replacing it with what they call a dysfunctional top-down relationship rife with instability and distrust.

Eighteen rural physicians from Westlock added their voice to others in a public letter Thursday that says they no longer trust the government. They said some of them will not work in hospitals after the COVID-19 pandemic despite the province revising some of its recent changes to fees and billing.

And 127 medical students from the University of Alberta and the University of Calgary, in a separate letter, said many of them are looking to leave the province after graduation due to uncertainty in their field.

"The actions and policies of the provincial government are destroying the trust of physicians across the province," said the students in the letter.

They criticized Shandro for cancelling the negotiated agreement with doctors in February then imposing fee and billing changes that he has been rolling back piecemeal as doctors announced their intention to stop working in hospitals for financial reasons.

"Alberta physicians are not protected from unilateral government changes because the existing contract protecting them was torn up in bad faith," read the student's letter.

"(Subsequent) sporadic policy changes have left us with profound uncertainty about our future. Many newly graduating physicians are looking to leave Alberta."

Justin Haylin, one of the medical students who helped organize the letter, said he and fellow students saw reports of doctors leaving and wanted to weigh-in and show support for their colleagues.

"That's what concerns us the most. There's profound uncertainty about our future and the climate (for doctors) here in Alberta," Haylin said in an interview.

The 18 Westlock doctors, spread over three clinics in the community north of Edmonton, said lack of trust is the fundamental stumbling block.

"Some of us will be handing in our letter of intent of resignation of hospital-based services," the doctors said in their letter posted on Facebook (See below).

One of the Westlock physicians, Dr. Vicci Fourie, could not say how many of the 18 will be resigning hospital duties.

"That's a personal (decision)," Fourie said in an interview. "(But) we wanted to get the message out."

They are the latest rural doctors to announce in recent weeks that billing changes imposed by Shandro had made it financially impossible to work in a hospital while also carrying the costs of their clinics.

Shandro addressed those key concerns last week when he announced some revisions to the changes. Rural doctors will once again be allowed to charge overhead while working in hospitals, and the province will not go ahead with planned subsidy cuts to medical liability insurance.

That decision has delivered mixed results. Ten doctors in Lac La Biche have said they will reverse course and keep working in hospitals. But nine doctors in Pincher Creek say trust is gone and they are still giving 90 days notice to end hospital duties, including emergency work and delivering babies.

The Westlock doctors said there can be no trust until the province negotiates a new agreement with the Alberta Medical Association.

Opposition NDP health critic David Shepherd again called for Shandro to quit or be fired. He said the doctor file needs a reset and that can't be done with Shandro.

"Tyler Shandro has burned his relationship with Alberta doctors to the ground," said Shepherd.

"If some physicians choose to voluntarily withdraw from hospitals, we’ll work with (Alberta Health Services) to maintain services, including replacing physicians as needed," said Buick.

Below is the letter the doctors posted on the Associate Medical Clinic Facebook page:

To our valued patients and community,

We, the doctors of Westlock, are here to care for you during this uncertain time. We appreciate the sacrifices you have made in obeying public health orders to keep our community safe. The COVID pandemic has challenged us to provide health care differently, but we remain committed to serving you.

Unfortunately, our ability to care for you is being compromised by the UCP government. Last year they passed Bill 21, which enabled them to terminate the master agreement between Alberta Health and the Alberta Medical Association (AMA). They then announced proposals for changes to the existing payment model for physicians, which we felt were harmful to patient care and our ability to practice comprehensive medicine. By way of Bill 21, this government gave themselves the power not to listen. They dismissed the AMA’s proposals to achieve the same savings with less disruption to the system. Government’s new physician funding framework was pushed through April 1st, despite the pandemic and cries from doctors and patients alike. We sincerely appreciate all of you who have taken the time to learn about these issues and write to our government officials.

Government did not appreciate how deeply these cuts would hurt rural practices, where doctors are ofa May 2ten trying to balance emergency room, inpatients, obstetrics, and clinic. When we aren’t in clinic, we still have to cover the costs of running the clinic – staff wages, rent, supplies, etc. it was no longer sustainable to try and “do everything.” Many physicians in rural Alberta responded by announcing their plans to leave the province, retire early, or stop hospital services in order to focus on their clinics. In response to the massive outcry from rural Alberta, Minister of Health Tyler Shandro announced on April 24 that they were going back on some of these changes and investing more into rural Alberta. In reality, what the Minister had done was rebrand the previous cuts as gifts to pacify rural MLAs who were angry about the crisis he had caused in their communities. There was no accountability for this entirely preventable crisis and no acknowledgement of our warnings for the past six months. In fact, the Minister appeared to blame the AMA for his own mess. Most importantly, he ignored our call for an agreement that would ensure we have a voice in future decisions so that something like this does not happen again.

We are worried that the Minister is too blind to admit what he does not know and too proud to accept help; none of us would presume we are well-versed enough in brain surgery to start cutting our patients without experience. Furthermore, if we were assisting an expert in the field we would make absolutely certain that we paused and listened carefully when he or she offered direction. Health care is life or death – this is not the place for pride or for trial and error.

So, while government walked back the changed that made it financially unsustainable to practice full-scope care in rural AB, they continued to show that they do not understand what we are asking for. We need a relationship between government and doctors in the form of a negotiated agreement with the AMA. If we are the only province without an agreement, how do we expect to attract new doctors to come? When we know this government can impose unilateral changes at any time, how do we expect the current physicians to stay? How do we provide any stability for the staff we employ (which in rural means our neighbours and friends)? We are literally being asked to man the front lines of a pandemic while the ground shifts between us at the whims of this government. It is exhausting and demoralizing.

For the government, this doesn’t seem to be about money; the AMA offered a 5% cut across the board instead of the targeted cuts put forth by the government that affects our ability to provide comprehensive care to our patients. We can only assume it is about control, but we are not comfortable allowing a government who has already had to backtrack on numerous issues to hold something as important as your health in their hands. Our number one priority is caring for you, and we need to ensure that cuts are done strategically and thoughtfully so that they do not affect patient care.

Due to the lack of trust in the Health Minister and the UCP government, we feel obliged to make a statement. Some of us will be handing in our letter of intent for resignation of hospital-based services. We will not abandon our patients during the COVID pandemic. Once we are out of the worst of this pandemic, we will proceed with our previous plan to restructure our practices to focus on seeing our patients in the office. Though the government has assured us that this would not be a problem as they have “replacement physicians” available, we doubt whether they in fact exist; if they did, we would not have had such difficulty recruiting in times where we were not facing such turmoil with our own elected officials.

Alberta physicians, both urban and rural, specialist and generalist, have been represented by the AMA for 114 years. We cannot be divided as a profession because it will disrupt the cohesive system Albertans are used to. We stand united in our support for the AMA, and we are calling for our government to return to negotiations with the AMA in forming an agreement.

To each of you that has supported us through advocating for the health of this community and all Albertans: we thank you. It is your right to have your concerns heard by those you elected to represent you. We ask that you continue to share your thoughts with your MLA, minister Shandro, and Premier Kenney. Your voice is important.

The letter was signed by all doctos in Westlock who practice in clinics and hospitals, including orthopedic surgeon Dr. Jan Lategan who, despite practicing in a hospital exclusively, says he stands with his colleagues.

This report by The Canadian Press was first published April 30, 2020

With files added on May 1, 2020 from TownandCountryToday.com