OTTAWA — A lobby group for Canada's newspapers and magazines is asking MPs to enact new rules to help its members negotiate compensation from social-media giants that post content the traditional media produce.
Nov 28, 2020 7:15 AM By: Canadian Press 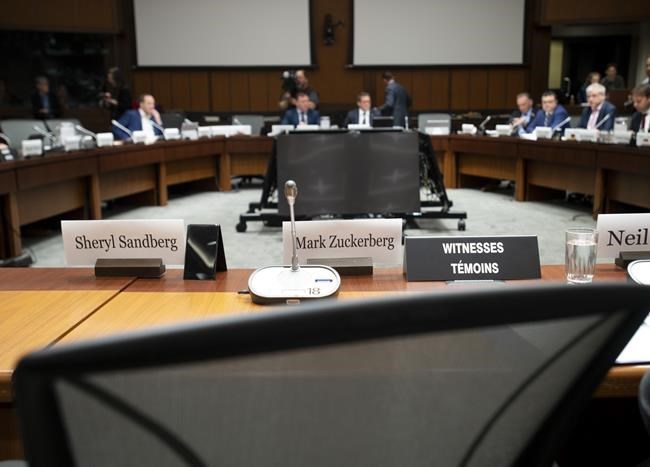 An empty chair sat behind the name tags for Facebook's Mark Zuckerberg and Sheryl Sandberg as the International Grand Committee on Big Data, Privacy and Democracy waited to begin in Ottawa, Tuesday, May 28, 2019. A lobby group for Canada's newspapers and magazines is asking MPs to enact new rules to let its members negotiate compensation from social media giants that post their content. THE CANADIAN PRESS/Adrian Wyld

OTTAWA — A lobby group for Canada's newspapers and magazines is asking MPs to enact new rules to help its members negotiate compensation from social-media giants that post content the traditional media produce.

News Media Canada wants the government to let the industry negotiate collectively with the likes of Google and Facebook.

There are similar rules in other countries, such as Australia and France, where Google announced last week it had signed compensation agreements with several daily newspapers and magazines, including Le Monde.

News Media Canada's CEO, John Hinds, said Canadian rules similar to those would negate the need for any new taxes or spending programs.

"It allows the industry and the digital monopolies to negotiate fair terms for compensation," Hinds told MPs on the House of Commons heritage committee Friday.

"It doesn't raise taxes, it doesn't deal with government sort of intervening in the marketplace, but it allows a fair market interaction between the platforms and newspapers."

The committee is studying the challenges the pandemic has created for media and culture groups.

Several members of the committee lamented the reduction in local news coverage as their newspapers cut back on coverage and editions to keep the lights on.

The federal wage subsidy, he said, has been helpful in avoiding worse.

Advertising revenue plunged by 75 per cent at the start of the pandemic in many markets, he said, and the industry is still struggling with advertising declines in the range of 30 per cent.

The federal government announced a $30-million communications budget at the start of the pandemic, but Hinds said there was limited placement of the resulting ads in Canadian news media.

"The government can deliver on its mandate to communicate with Canadians by implementing a strategy of placing ads where Canadians are looking for trusted content and advertising," he said.

Without federal help, he added, the future is grim for many of his member organizations.

This report by The Canadian Press was first published Nov. 27, 2020.