Marius Oelschig won the grand prize from the Poetry Institute of Canada for his poem, "Fireflies"
Feb 25, 2021 1:15 PM By: Krista Conrad 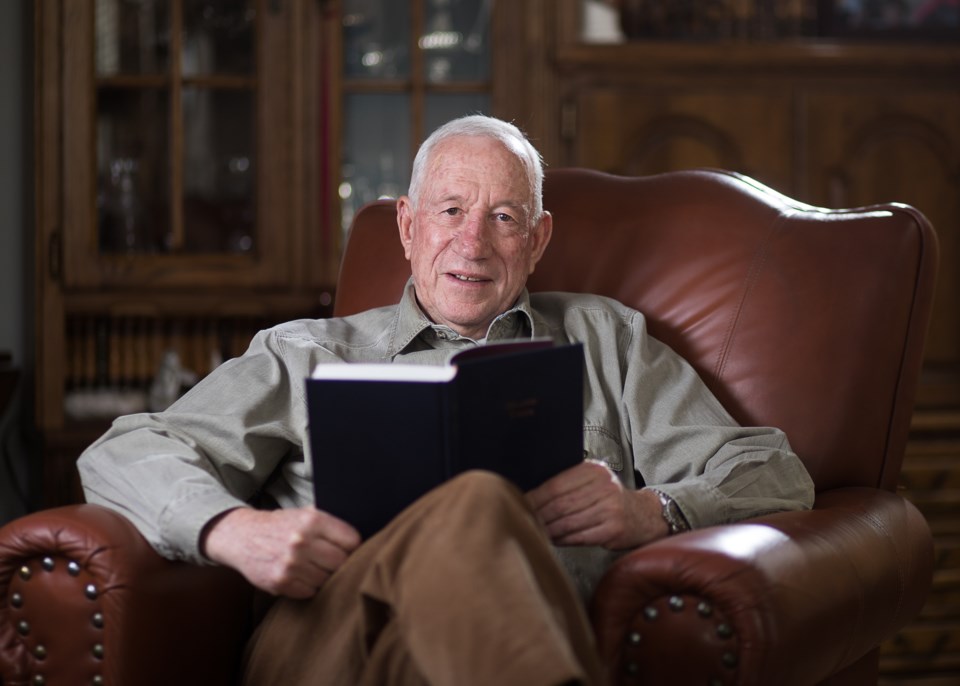 Marius Oelschig with one of the anthologies containing his writing on Feb. 24, 2017. Oelschig's latest book won the top prize in the Poetry Institute of Canada's contest.Brent Calver/Western Wheel

An Okotoks poet was shocked when he received a phone call informing him he’d won a year-old contest.

After submitting a piece to the Poetry Institute of Canada’s annual contest in 2019, Marius Oelschig hadn’t heard from the organization because it had shut down operations due to COVID – until early in February 2021, when the editor of the Institute’s anthology called to tell him his poem had taken the grand prize.

“I was stunned but really satisfied,” said Oelschig.

The poem, entitled Fireflies reflects on the impacts of modern life on nature, calling readers to take up the torch and help save the environment.

As an avid fly-fisherman who appreciates wildlife and the outdoors, he felt the message of the poem was pertinent and decided to submit it to the contest.

Its stanzas first took shape during a volleyball tournament, in between his grandson’s matches.

“It was while we were sitting there in the gym, there wasn’t really much going on, and I had my tablet with me and just started writing the first stanza – ‘Are you enchanted by the passage of a city tram?’” said Oelschig.

By the end of the day he had penned the bare bones of the poem, and continued working away at it over the course of a few months.

Winning the contest was a surprise, though it’s not the first time he’s taken the top prize from the Poetry Institute – Oelschig also received the top honour for his poem Regret in 2018, and a short story submitted in 2017 was awarded the grand prize.

However, career and child-raising took the front seat through much of his life, and it wasn’t until about 19 years ago, when his grandchildren were born, that he began to write in earnest.

He and his wife were still living in South Africa at the time, and the little ones were in Canada. Each week, Oelschig would send one chapter of a children’s book to them via email for their mother to read.

Before he knew it, he had authored eight complete children’s books and when he retired and immigrated to Canada with his wife, his daughter convinced him the books should be published.

Since that time, he has published the eight children’s books, an anthology of short stories and verse, and two anthologies of poetry. The most recent anthology, The Scars of the Chisel, was published in November 2020, and features his award-winning poem, Fireflies.

He said it was borne out of the pandemic.

“We were locked down, we couldn’t go anywhere, we couldn’t visit friends and so on,” said Oelschig. “I sat at home, and besides the fly-fishing I’m passionate about, I spent a lot of time writing poetry, digging up old poems, and I compiled this particular anthology because of the pandemic.”

The book is 121 pages long, but he said that doesn’t include one piece per page. Each poem is accompanied by background information and insight into its inspiration.

Its name, The Scars of the Chisel, is taken from one of the poems entitled The Chisel of Time, which he wrote after hearing about two good friends in South Africa passing away. It made him think about the passage of time and the fragility of life.

“It’s about how the chisel of time keeps chipping away, destroying everything through time until eventually all that will be left will be time,” said Oelschig.

He said the name of the anthology speaks to how people carry their scars throughout time, from childhood through their careers and into old age. The memories of adventures or misadventures shape a life as time passes.

“That all leads to the feeling of this anthology,” said Oelschig.

There are no plans to stop writing in the near future, especially with the support of the local group, Write Away, a collaboration of creative writers who share their works and provide insight and advice to one another.

“It’s a wonderful group to belong to,” he said. “All like-minded, all interested in creative writing or poetry, and it’s really been very helpful and encouraging.”

Are you enchanted by the passage of a city tram?

Do the shadows of tall buildings bring you peace?

Do you believe that “nature” is a monumental sham

And pray that plans for conservation cease?

Perhaps the roar of traffic is the music of your world;

Perhaps the shriek of sirens makes you sing.

Has city-dwelling always been your most sought-after pearl

And are heaving, seething multitudes your “thing”?

Have you seen the piles of trash that end up in the sea?

And even though you haven’t, it’s still there.

While “out of sight” is what we do to mask our apathy,

Have you seen the fireflies in summer’s sultry gloom

And listened to the loons beyond the trees?

Have you smelled the jasmine ‘neath a captivating moon

With the perfume of the pines upon the breeze?

Can you imagine what we’d do without the butterflies?

Without the bees we hardly ever see?

There’s more life “out there” than you could ever realise

Without which we wouldn’t even ... be!

With not a thought for what they really cost,

Will drive our world beyond its means to satisfy our dreams

‘Til everything we truly love ... is lost.

Have you seen the fireflies as day fades into night,

Perhaps the glow of fireflies will help us see the light

And move us all to save our world ... before we let it die.