Pandemic exhaustion could drive some to gather for Easter despite warnings

The second Easter weekend of the pandemic has become an emblem of exhaustion over public health measures, some say, as politicians across much of Canada warn families not to gather in person for the holiday.
Apr 3, 2021 9:45 AM By: Canadian Press 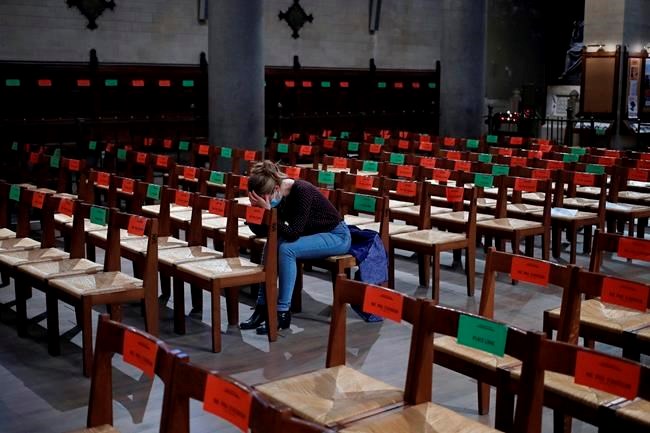 A worshipper prays as stickers to respect social distancing are placed on the seats after a Holy Easter Thursday service in Saint Pierre de Montrouge church, in Paris, Thursday, April 1, 2021. The second Easter weekend of the pandemic has become an emblem of exhaustion over public health measures, some say, as politicians across much of Canada warn families not to gather in person for the holiday. THE CANADIAN PRESS/AP-Francois Mori

The second Easter weekend of the pandemic has become an emblem of exhaustion over public health measures, some say, as politicians across much of Canada warn families not to gather in person for the holiday.

The third wave of COVID-19 crashing across the country has made get-togethers perilous, prompting provincial and federal officials to encourage virtual celebrations and in some cases tighten restrictions.

"I know many of you were hoping to celebrate this important holiday with family and friends. But again, I'm asking people to only gather with their immediate household."

That messaging didn't go far enough to convince Marcia Martins, who lives in Toronto with her husband and two kids, to stay home for Easter.

Instead, she'll be scaling back her family's typical huge gathering to four households -- hers, her parents', her brother's, and her aunt and uncle's.

Most of the people who will be gathering don't work outside the home, she said, so she's not worried about safety.

"These are just difficult times right now," she said. "And I'm just glad that there's a way that we can just keep as close to normal -- or what our old normal was."

Recent statistics suggest more than 40 per cent of Canadians feel safe attending family gatherings at this point, and a quarter believe the government is overhyping the dangers of COVID-19.

The online poll of more than 2,000 Canadians, carried out between March 15 and 25 by Leger for the Association for Canadian Studies and the University of Manitoba, suggests the messaging isn't getting through, said Jack Jedwab, who heads up the association.

"We'll need to keep warning people that they need to be cautious," he said. "It's a very hard ask of people right now not to gather at this time of year, even though it's something we must do."

Leger said its poll would have a margin of error of plus or minus 1.9 per cent, 19 times out of 20, though the polling industry's professional body, the Marketing Research and Intelligence Association, says online surveys cannot be assigned a margin of error because they do not randomly sample the population.

For his part, Jedwab said he is sticking to virtual get-togethers over the long weekend, just like he did for Passover last week.

"For many of us, it's kind of wired in our DNA to get together with our family and friends around this time," said Jedwab, who lives in Montreal.

Rhonda Davidson, who lives in Oakville, Ont., said she's resisting the urge to see extended family this weekend and celebrating only with those in her household -- her husband and their kids.

She said she understands that people are facing pandemic exhaustion, but feels they should put that aside for the greater good.

"I'm tired of it, too," she said. "Everyone's tired. No one likes it. Just do what we're supposed to be doing right now, and then hopefully this can all be done."

Ontario's government urged residents to do just that Thursday as it announced a "shutdown" of the province. Personal care services such as hair salons are to close and restaurants are to move to takeout only.

But the Progressive Conservatives stopped short of replicating the stay-at-home order that came into effect in early January, even as they touted its success at slowing the spread of COVID-19.

"We're not going to be producing a stay-at-home order, because we saw the last time that it had tremendous ill effect on both children and adults," said Health Minister Christine Elliott. "...We of course have to balance any measures that we take with people's mental health as well."

Quebec, too, found itself tightening restrictions in some regions -- a measure announced Wednesday evening.

Schools and non-essential businesses were closed and the curfew moved to 8 p.m. in Quebec City, Levis and Gatineau. Legault said the lockdown would last for at least 10 days.

In British Columbia, the provincial health officer initially said people could gather indoors for worship services between late March and early May, which this year encompasses Passover, Easter, Vaisakhi and parts of Ramadan.

But a recent surge in COVID-19 cases saw Dr. Bonnie Henry rescind that offer this week, for fear religious gatherings could contribute to the virus's spread.

"We're just in a very difficult position," Henry said on Monday. "Some of these important holidays are going to be difficult this year, again."

Churches, for which offering online services is now old hat, will livestream their Easter celebrations for those who can't attend in person.

In Saskatchewan, however, Premier Scott Moe stopped short of changing any rules, instead asking people to follow public health advice.

"I would just also urge folks to be very, very careful," he said. "If they are going to gather, I would urge them to consider potentially not gathering this weekend."

This report by The Canadian Press was first published April 2, 2021.