Rascally rabbits may be banned in Banff 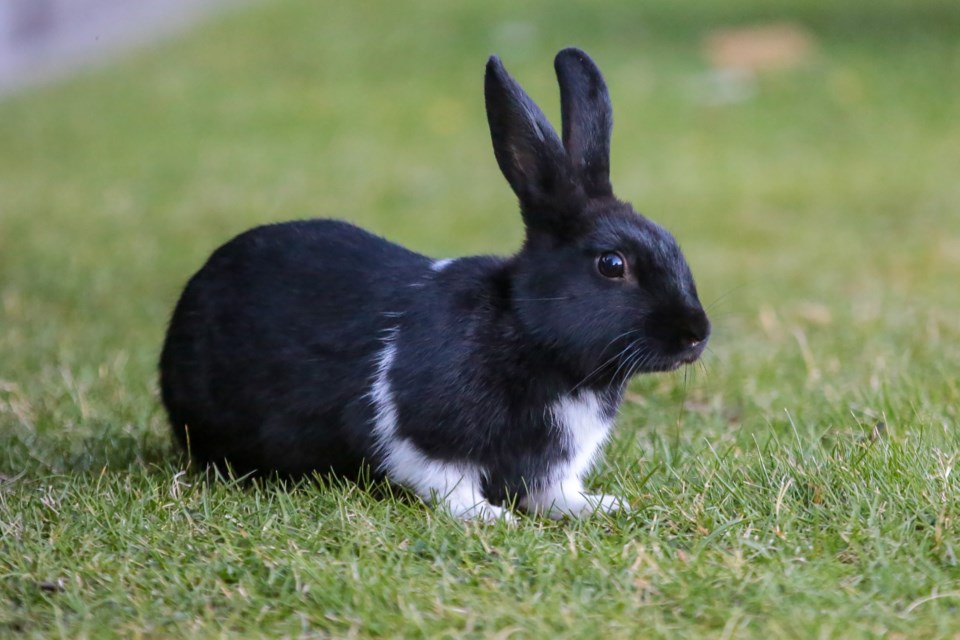 BANFF – The Town of Banff looks set to ban pet rabbits in the national park community.

Banff’s current animal services bylaw limits the number of domestic rabbits per home to four, but Town administration suggested the bylaw spell out that bunnies be allowed inside only so as not to attract hungry wildlife into neighbourhoods.

Councillor Ted Christensen, however, said there should be an outright prohibition on pet rabbits in the national park townsite, noting the transient nature of the tourist town’s population could heighten the risk of pet rabbits being let loose.

“I support pets for children … but I think we need to send a strong message that rabbits are not considered a pet for Banff because of the blatant example in Canmore,” he said during the governance and finance committee meeting on Monday (Sept. 8).

“I expect we would get support from Parks Canada on the bigger picture on this too.”

On a 4-2 vote, the governance and finance committee included a section banning pet rabbits in the proposed amended animal services bylaw, which will be back to council for first reading at a future meeting.

In neighbouring Canmore, about 25 kilometres east of the Banff townsite, the feral rabbit problem began when a dozen or more domesticated rabbits were released in town in the 1980s.

The Town of Canmore hired a contractor in 2012 to live trap and humanely euthanize rabbits every year. So far, the municipality has spent $482,517. The total number of rabbits captured during this time is 1,662, at a cost of $290 per rabbit.

When the trapping program started, the rabbit population was estimated to be about 2,000, and although there is no estimate now, short gestation periods and large litters can mean a rabbit population can bump from two to 70 within one year.

In Banff, there have been about 20 feral rabbits captured over the past five years. Many were relocated through the Earth Animal Rescue Society (EARS), with rabbits going to various sanctuaries in Calgary, near Cochrane and in Victoria, B.C..

“Over the past five years, we’ve captured almost 20 that were in the wild,” said Tony Clark, the Town of Banff’s manager of municipal enforcement.

“They had no connection to any home in town; I don’t know how they got here.”

The Bow Valley human-wildlife coexistence task force recommended removal of feral rabbits in Canmore to keep predators such as cougars and wolves out of town.

In addition to being a wildlife attractant, feral rabbits also cause extensive damage to public and private property, and leave behind a significant amount of feces.

“The human-wildlife coexistence Bow Valley report specifically notes that domestic pets such as rabbits can be wildlife attractants when kept outdoors,” said Clark.

Coun. Peter Poole also supported a ban on pet rabbits, noting the feral rabbit situation in Victoria, B.C. as well as in neighbouring Canmore could be well imagined here.

“The sensational news coverage in Victoria about slaughtering rabbits was just devastating for the city and extremely expensive for them to manage – one or two rabbits costs hundreds of thousands of dollars of taxpayers’ money,” he said.

“If we have that problem here given the national park setting, it’s going to be a real embarrassment for us, and I think we ought to follow the conservative approach.”

Coun. Brian Standish, who ended up supporting Coun. Christensen’s motion, initially suggested it be a requirement that rabbit owners licence their pets.

“At least we know who has them and where they are,” he said.

Mayor Karen Sorensen, who co-chaired the Bow Valley human-wildlife coexistence committee, said she could not support the move to ban rabbits right now, although she understands the intent.

“Maybe if there’s only one rabbit in the home, there’s less likelihood of a problem than if there’s four rabbits,” she said.

“The thing we have to look at is it hasn’t been a problem in our town, but I also understand how quickly it can become a problem.”

Coun. Corrie DiManno didn’t believe she had enough information at this point to support a move towards banning pet rabbits.

“I also just don’t understand if this is an issue now,” she said.

“I guess I can look at Canmore to see how it could potentially become one, but I’m just looking for a little bit of guidance.”

In addition, the animal services current bylaw has no restrictions on the number of dogs and cats allowed.

However, a new proposal would limit the number to no more than four dogs or four cats per home. This would not apply to puppies and kittens under the age of three months.