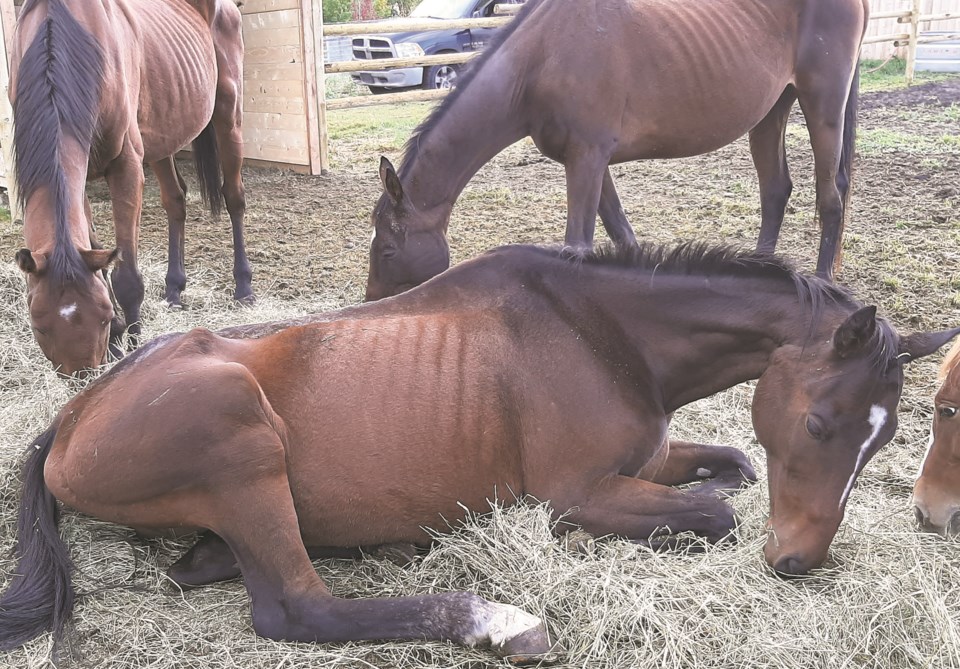 Three horses on sale at a Westlock auction Sept. 19 were reported to the Alberta SPCA for their bad condition. All three are under new ownership with a rescue facility working to rehabilitate the other two and humanely put down the third. Supplied

WESTLOCK - The Alberta SPCA has started an investigation into three emaciated horses sold at a Sept. 19 auction in Westlock.

“We did receive a public complaint about horses potentially in distress at an auction house north of Edmonton last weekend. An investigation has been opened and is ongoing,” said Dan Kobe, communications manager with the SPCA.

They can’t offer any details on the investigation, which can take weeks or months. He confirmed peace officers are involved, but didn’t give details about their location, just that they’re “based out of the Edmonton office” if they work in northern Alberta.

The three horses are now in the care of new ownership at a rescue facility. It’s not clear if the horses belonged to the same owner.

“We brought them home that night and they literally were trying to trample us down to get out of the trailer because we had parked on the grass in my yard,” said the new owner, who wished to remain anonymous.

The horses were “thin and dehydrated” when they first saw them. They’ve been working with the SPCA, who came to examine the horses with a team of vets from the Spruce Grove area, to rehabilitate them.

“We had to make a plan to get these horses back up to wintering level, so we can try to keep them alive through the winter now safely, so that we don’t have any extra problems.”

Vets determined that one of the horse’s body condition was at a negative one on a scale from one to nine. Normal conditions range from five to eight. While they expect the other two horses will recover, the one thoroughbred’s leg-related complications mean he’ll be euthanized in the near future.

The new owner clarified that it’s “not necessarily his body condition” that left the horse with no hope of recovery.

He has a severed ligament on his front leg, so it can’t support his current weight. As he’s gaining weight, he’s using his flexor tendons more frequently, which isn’t supposed to happen. It would leave him “completely crippled on the front end,” said the new owner, despite the fact that he’d eating better.

“We did buy him on the anticipation that we were going to have to euthanize him humanely.”

Poor care has also left the horse with bad arthritis.

A second horse “has an abscess on his hind end and he’s lame in the back. He has an abscess on the front foot,” but he’s doing well. So is the third horse, who’s mostly sore and very thin. They expect these two will recover.

“We’re lucky that we had access to buy these guys. Maybe in the next sale, we won’t see the skinny horses because they’ll put them on the meat buyer’s truck.”

The owner explained that “we attempt to buy horses that are directly bid against by meat buyers, so we try to prevent bidding on any horses that are bid on by the public. Those horses aren’t in jeopardy of going for slaughter.”

A second person, who filed a complaint with the SPCA Sept. 20, says they heard back from the non-profit who confirmed multiple complaints were received about the thoroughbreds.

About the Author: Andreea Resmerita