EDMONTON — Social gatherings in Alberta's two biggest cities have been limited to 15 people after new daily COVID-19 cases reached the 500 mark on the weekend.
Oct 27, 2020 9:15 AM By: Canadian Press 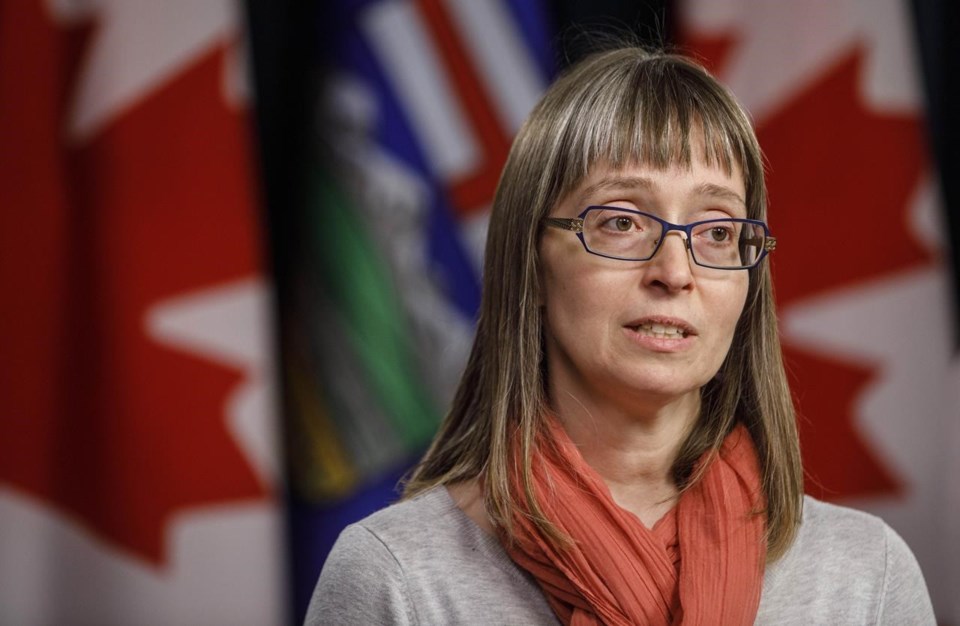 EDMONTON — Social gatherings in Alberta's two biggest cities have been limited to 15 people after new daily COVID-19 cases reached the 500 mark on the weekend.

"This limit applies to gatherings where people are mixing and mingling such as dinner parties, birthday parties, social events and wedding and funeral receptions," chief medical officer Dr. Deena Hinshaw said Monday of the new rules for the Edmonton and Calgary health zones.

Elsewhere, the limit for indoor social gatherings remains at 50.

Hinshaw also announced that voluntary measures previously recommended in Edmonton to encourage wearing masks indoors at work and to limit contacts have been extended to Calgary.

The Edmonton zone has been Alberta's COVID-19 hotspot with about half the province's active cases in recent weeks. While the capital region had seen a dip, infections are once again trending up, Hinshaw said.

Calgary seems to be on a trajectory similar to where Edmonton was several weeks ago, she added.

Alberta recorded 364 cases on Friday, 572 on Saturday, and 506 on Sunday. Seven additional deaths on the weekend brought the province's total fatalities to 307.

“The warning bell is ringing and I want all of us to hear its call,” Hinshaw said.

She noted that a disproportionate number of outbreak-linked cases are from social gatherings. Fifteen per cent of outbreaks are from such events, yet one-third of people infected in outbreaks contracted the virus while socializing or celebrating.

Only one outbreak has been linked to a restaurant over the last two weeks, she said, so there are no new limits on eateries, bars or theatres, as has been the case in other provinces.

They key, Hinshaw said, is finding a balance between slowing the spread of COVID-19 and minimizing the impacts of restrictions.

The new limits are to be reassessed in a month and it will be weeks before authorities can tell if they worked.

Hinshaw said "egregious" violations could lead to a $1,000 fine, but she added that she believes the vast majority of Albertans will do the right thing and follow the rules.

"I really am urging Albertans to see this as their chance to save our health-care system and to prevent spread to high-risk individuals."

Also Monday, the province said all of the Alberta politicians who came into contact with a provincial cabinet minister infected with COVID-19 have tested negative for the virus, but will remain in isolation until Thursday.

Kenney received his negative test result on Thursday, but said he would continue to isolate at home for a week as a precaution.

This report by The Canadian Press was first published October 26, 2020.

— By Lauren Krugel in Calgary