“This is not overly unusual, but it’s a little on the larger side for this area. It is part of the ongoing low-grade tectonic activity in the Rocky Mountains, but it’s not necessarily a prelude to anything super exciting.”
Feb 18, 2021 11:15 AM By: Cathy Ellis 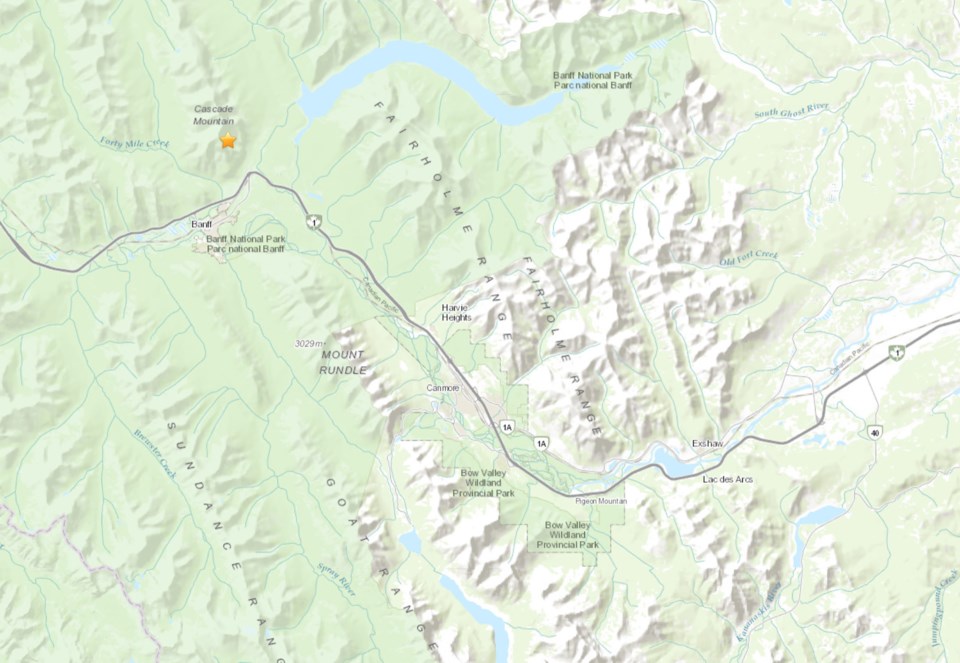 Location of a 3.9 magnitude earthquake six kilometeres north of Banff on Saturday (Feb. 13).

BANFF – An earthquake measuring a magnitude of 3.9 near the Banff townsite, which rocked homes and buildings throughout the region, is not considered unusual for the Canadian Rockies.

With a loud boom and buildings starting to shake when the earthquake struck at 6:33 p.m. on Saturday (Feb. 13), emergency crews in Banff and Canmore were quick to investigate and check for any damage.

Earthquake experts say the epicentre of the quake was about six kilometres north of the Banff townsite near Cascade Mountain and recorded at a depth of 17.3 kilometres.

“This is not overly unusual, but it’s a little on the larger side for this area,” said Taimi Mulder, an earthquake seismologist with Natural Resources Canada.

“It is part of the ongoing low-grade tectonic activity in the Rocky Mountains, but it’s not necessarily a prelude to anything super exciting.”

Town of Banff officials say the initial Saturday night call-out was based on a report of a serious train derailment, but it soon became apparent it was a seismic event.

“I would say it didn’t last more than one or two seconds,” said Silvio Adamo, Banff’s fire chief and director of emergency management.

“It was a big boom and a shake and then it was over. There was no ongoing tremors.”

The earthquake was initially reported by the United States Geological Survey as magnitude 4.4 on the Richter scale. Differences in types of equipment used in Canada and the U.S. was explained as the reason behind the initial discrepancy.

There were immediate concerns for the 1941 Lake Minnewanka dam not far from the epicentre.

Once alerted about the earthquake, operating crews with TransAlta Corporation were dispatched to complete visual inspections of all dams, power generation facilities and associated infrastructure west of Cochrane.

James Mottershead, a spokesperson for the corporation, said a more detailed engineering inspection and reading of the instruments took place following the initial visual inspection.

“No issues of concern were identified at any of the dams,” he said.

At the Cascade facility northeast of Banff, Mottershead said slight seepage was identified to be coming from the Cascade penstock – the large pipe that carries water from the Two Jack Canal to the powerhouse.

“Ongoing inspection and repair planning is underway and the penstock has been removed from service while this work takes place,” he said.

“A root cause investigation is underway to determine if the seepage is related to the seismic event.”

“There has been no material impact to our hydro facilities and generation capacity,” he said.

“We will continue to monitor the facility closely and anticipate effecting repairs shortly.”

Adamo said the initial call-out was for a train derailment, prompting the Town of Banff to call Canadian Pacific Railway through the dispatch service.

“I imagine that was from someone near the tracks that just made that assumption,” he said.

“We quickly ruled that out, at least a train derailment within the town, but we quickly sent an apparatus east toward Canmore to see if we could identify any.”

Adamo said crews checked for damage to infrastructure and utilities, including at the waste water treatment plant and the deep wells that draw the municipality’s drinking water.

“There was no reports of any damage; we didn’t lose power," he said.

The Town of Banff reached out to TransAlta to make sure necessary assessments were underway amid concern for any possible breaches of the Lake Minnewanka dam.

“Minnewanka, obviously, being the dam of concern from our perspective,” Adamo said.

“It should be everyone’s concern from here to Medicine Hat, actually. If that dam has a catastrophic failure, the effects are felt all the way to there.”

The largest historical earthquake in the cordillera of eastern British Columbia and western Alberta appears to have been on Feb. 4, 1918, at about 8:37 p.m., located about 150 kilometres north of Revelstoke near Mica Dam (McNaughton Lake).

Registering a magnitude of 6, the earthquake was felt in Banff where pictures hanging on walls were reported to have moved. The event led to the collapse of two chimneys in Revelstoke.

More recently, an earthquake registering a 2.7 magnitude was felt by Banff residents at 5:42 p.m. on Oct. 17, 2014. Its epicentre was about four kilometres southwest of the Banff townsite.

According to the Geological Survey of Canada, there are a handful of earthquakes recorded in the Rocky Mountains and front range each year, ranging from magnitude 2.5 to about 3.4.

However, Mulder said an earthquake near Dawson Creek in 2011 registered a magnitude of 5.4.

“In the Rockies, there are a handful of events every year that are tectonic in character, that are actually earthquakes, and magnitude range from about 2.5 up to 3.4.”

According to seismologists, anywhere from 2,500 to 4,000 earthquakes are located each year in western Canada.

With the earthquake in Banff on Feb. 13, Mulder said it was more than likely a result of the residual stresses of the tectonic plates on the west coast of Canada and the United States.

“All of those forces just propagate across the continent,” she said.

The closest siesmic measuring instrument of the Canadian Seismic Network is in Edmonton.

“That means we aren’t detecting very small magnitude 1s in the Rockies,” she said.

“However, we certainly detect anything 3 and above, and over time, there’s been a number of these events in the southern Rockies of Canada.”

There were no recordings of aftershocks following Saturday’s earthquake in Banff.

“I suspect there doesn’t tend to be a lot of aftershock activity at these events in the Rockies, but that being said, our instruments are very far away and if there was very low level stuff we would not be picking that up,”  Mulder said.

“On the other hand, if there was a magnitude 1 right underneath Banff, I am pretty sure people would have felt that.”

Around the globe, there was a lot of seismic activity on Feb. 13.

Mulder said there’s generally “a lot of activity all the time around the globe," but certainly there are some days where there’s more than others.

“Sometimes, with the larger events, the waveforms travel all around the globe, like for a magnitude 7, or even magnitude 5; it can go on for a while for larger events like 7s and 8s,” she said.

“And sometimes these larger events can trigger seismicity in other parts of the world, but they are only triggering things in areas that were going to rupture anyway.”

On a philosophical level, Mulder said these events are all interconnected all the time.

“But on a practical level, I would say not directly correlated, but it was more fortuitous,” she said.

“Many seismologists have gone and looked at this question and it’s such a complex process our planet,” she added.

“In terms of the absolute truth of what’s happening, we just know a small spattering of it as human beings.”

Meanwhile, Adamo said he wants to remind residents to sign up for emergency alerts at banff.ca/alert.

“We were prepared to push notification right away if it had been a more significant event,” he said.

“This earthquake is a good reminder for folks to sign up for that alert system so they can be well informed.”