Parks Canada urges drivers to obey all signs and to avoid stopping on the Trans-Canada Highway where a rare white grizzly bear and its sibling have been hanging out. “They’ve been getting onto the highway right-of-way fairly regularly and we’ve been getting reports of them along that section."
May 5, 2020 2:15 PM By: Cathy Ellis 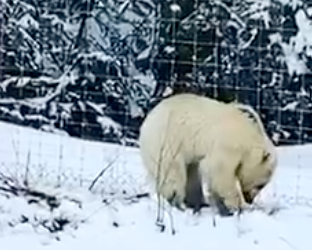 A white grizzly bear is seen on the side of the Trans-Canada Highway in a video taken by Harvie Heights resident Cara Clarkson on April 26. SUBMITTED IMAGE

BANFF – A Bow Valley family had a once-in-a-lifetime experience after coming across a rare white grizzly bear.

Cara Clarkson was with her husband Tyler and two sons, Beau, 3 and baby Jak, six months, when they spotted two young grizzlies looking for food along the Trans-Canada Highway in Banff National Park on April 26 – one brown and one white in colour.

“It was a luxury and incredible experience for those of us who were driving by.”

What made it extra special was the fact Tyler and young Beau were celebrating birthdays – Tyler’s on April 26 and the three-year-old’s on April 24.

“What a birthday treat for my husband and Beau,” said Cara, who is director of operations at the Rimrock Resort Hotel in Banff.

“A white colour-phase in black bears is seen more often than in grizzly bears. I don’t know of a white grizzly bear,” said Canmore-based Gibeau.

“I have never in all my time working with grizzly bears – since the early 1980s – seen a white grizzly bear. I’ve seen a really, really blond grizzly, but never a white one.”

Based on his quick look at the video recording of the bears, Gibeau said it is not an albino bear – an absence of pigment in the skin and hair, which are white, and the eyes, which are usually pink.

“It’s not an albino because an albino is something different again,” he said.

Gibeau said the rare colour in bears is caused by a recessive gene that makes fur white.

“Black bears can be everything from black to white and in between, and in grizzly bears it doesn’t happen as often,” he said.

“You do get black grizzly bears, like coal black, and I’ve seen a number of those, but to have the opposite, very, very light, is uncommon, and to have one that is absolutely white is just unheard of.”

The two bears are siblings, aged three-and-a-half, and the offspring of bear 156, a female bear collared for the 2012-17 Canadian Pacific-Parks Canada study on grizzly bear mortality on the railway.

Jon Stuart-Smith, a wildlife management specialist for Lake Louise, Yoho and Kootenay, said Parks Canada staff first saw the cubs with their mamma two springs ago by the edge of the Trans-Canada Highway near Bath Creek flats.

“That was the first time we were aware she had this very blond cub,” he said. “Then, last spring, they were seen without their mother.”

At that time, the two cubs showed up on their own at the site of a train derailment and grain spill that had occurred earlier in the year near the Spiral Tunnels in Yoho National Park.

“We actually dealt with them a number of times on that site, they keyed into that,” said Stuart-Smith. “That’s probably part of the home range that their mother took them to, and they spent a week or so there where we tried to haze them away.”

The two exploring bears visited the site again this year to check it out, but the spill had been cleaned up.

“There isn’t anything there to keep them on that site anymore, there’s no attractant left,” said Stuart-Smith. “We hope they move onto other locations and then eventually move up into higher elevations.”

According to Parks Canada, the video taken by Clarkson was one of the earliest sightings of the two bears this spring, which bounce back and forth between Banff and Yoho national parks.

Stuart-Smith said the bears, unfortunately, were able to get inside the highway’s wildlife exclusion fence because snow drifts this year were so high that the fence was buried in some areas.

In response, Parks Canada was quick to install temporarily fencing to try to prevent the bears from getting onto the highway; however, the bears also travel and spend time along the unfenced portion of the highway in Yoho National Park.

While no funds have been allocated to the $400 million highway twinning project, the federal agency’s detailed impact analysis released earlier this year calls for fencing, as well as three overpasses and 16 underpasses in the 40-km section.

Warning signs alerting drivers to the potential presence of the young bears have been set up along the highway, urging people to obey the speed limit and to pay special attention.

If the young bears continue to stay roadside, Stuart-Smith said Parks Canada will consider other options, including the potential of a reduced speed limit to try to protect the bears.

“Because of that section not being fenced, people should be aware that the wildlife are potentially on the highway there.”

Under the current circumstances with the COVID-19 pandemic leading to national parks being closed to visitors, Parks Canada asks people to not come to the park specifically to look for wildlife, including this white bear.

“But regardless of that, our normal approach for wildlife on the Trans-Canada Highway is for people not to stop because of the concerns for traffic safety… the safety of people as well as the safety of wildlife,” said Stuart-Smith.

“This is a unique bear, and I certainly have never seen one before, but  we ask people can appreciate that it’s out there and do things to ensure its safety, like not stopping on the highway.”

Meanwhile, Cara was able to use the incredible experience of seeing the white grizzly bear and its sibling as a teaching moment for her three-year-old son, Beau, who had said: “Mommy, the bears are so beautiful.”

Cara said she talked about bear hibernation and the food they eat such as berries - as well as the need for the highway fencing.

“He asked why they were on the road and we talked about fences and how they keep the bears safe,” she said.

Although blown away by the experience, the family didn’t linger.

“We got our less than a minute’s worth of wonder and then said, ‘let’s leave them and on our way we went,’ ” said Cara, noting they did not want to disturb the two young bears any longer.

“Even though we live in the area and usually we see bears, we typically keep on moving because it’s their terrain, not ours,” she added.

“But this was a once-in-a-lifetime thing to see a white grizzly bear and we had to take advantage of making a moment out of it.”

Canadian farmers have spring in their step from strongest commodity prices in years
May 17, 2021 12:15 PM