Amateur radio operators use the airwaves to stay connected during coronavirus outbtreak
May 4, 2020 2:45 PM By: Barry Kerton 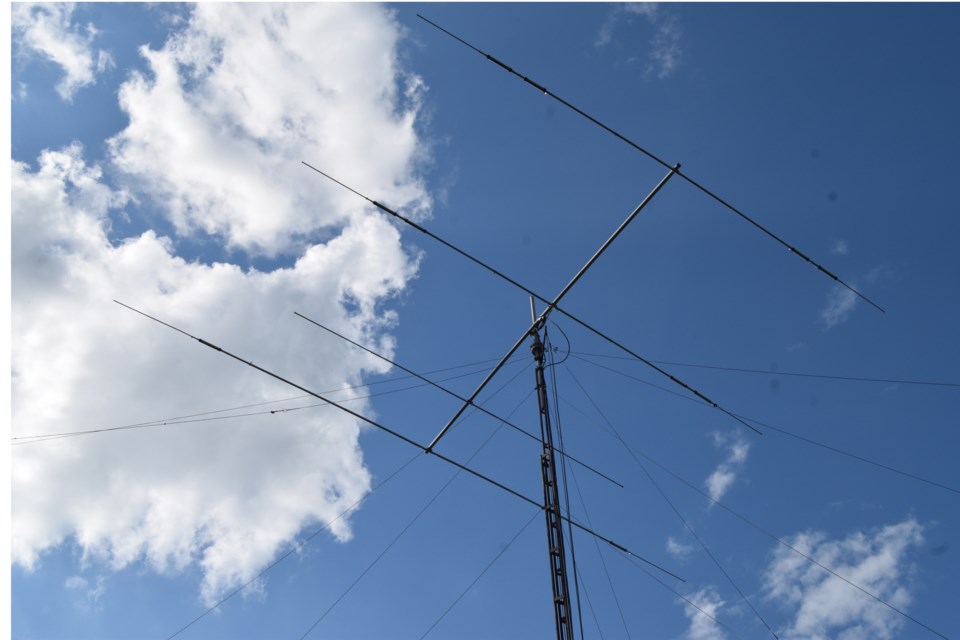 Ham radio operators use a wide variety of equipment such as this beam antenna to help them talk with their fellow radio enthusiasts all over the world.

BARRHEAD — Amid the coronavirus outbreak and people being forced to spend more time at home, people are using technology to bridge the physical gap and stay connected.

Ham radio operators use the radio frequency spectrum to pass non-commercial messages to each other using a wide variety of transmission mediums such as voice, Morse code, television and as well as other digital modes.

Barrhead resident Jeff Attrill is one of the more than 7,900 operators in Alberta. In Canada, there are upwards of 70,000 hams.

“It is a great hobby,” he said, adding amateur radio operators come from all walks of life and age demographics.

The Town and Country This Week caught up with him shortly after he finished a conversation with another local ham in Westlock via VHF simplex.

Hams have also installed repeaters, located on high buildings, hills and mountains, to extend the range of their radios.

Although Atrill holds an advanced licence and is allowed to operate on the entire amateur radio frequency spectrum, his favourite method is VHF.

He noted most ham radio operators start out operating on VHF or UHF (ultra-high frequency) FM, which also uses line of sight communications through simple mobile of handheld radios, talking through repeaters.

The two closest repeaters in the Barrhead area are in Whitecourt and Stony Plain. There is also a repeater in Athabasca, as well as several repeaters servicing Edmonton and surrounding regions. The Stony Plain, Whitecourt and Athabasca repeaters are sponsored by the Quarter Century Amateur Radio Club based in Edmonton.

“The Whitecourt and Stony Plain repeaters are linked together and every Wednesday night there is a net, that any ham who can hit the repeater can check-in to,” he said, noting the net is quite informal. “On Wednesday [April 1,] we had 25 check-ins.”

Atrill noted for many people in the Barrhead and Westlock regions using their first radio, they might have a little trouble hitting the local repeaters, but with a little ingenuity and the help of another ham, they could build an antenna that would extend their range and easily reach the repeater.

He also noted as they gain experience, they might want to expand their activities. For example, he said, one of his favourite activities on VHF single-sideband is using atmospheric conditions to extend his range, noting he has talked to someone as far as Lethbridge. He has also relied on amateur radio satellites to extend his range.

Attrill added there are several other modes and subsections of the hobby for people to explore whether it be HF (high frequency) where hams use the ionosphere to bounce signals off for long-distance communication, contesting to transmitter hunting and building your equipment.

“The options are almost endless,” he said.

Atrill noted that for those interested in getting their amateur radio licence, it is more attainable than ever.

Attrill was first licenced in 1973 in New Zealand. To get his technician licence he had to write a hand-written exam that included drawing out schematics. The technician class allowed only limited access to the ham radio spectrum.

“It wasn’t too difficult for me because I was a television technician, but it did stop a lot of people who might have otherwise been good operators from getting into the hobby,” he said, adding that to get a higher class with more privileges people had to prove their proficiency in Morse code.

Canada, at the time, had similar requirements.

“But that has changed. It is much easier for people to get into ham radio. With a little bit of effort, anyone can get their licence,” he said.

In Canada, there are two classes of licences Basic and Advanced.

For the basic licence, prospective hams have to write a 100 question multiple-choice exam demonstrating their knowledge of basic radio theory and operating practices. Morse code is no longer a requirement. The advanced exam is 50 questions and candidates have to demonstrate a deeper understanding of radio theory.

For more information on how to get a Canadian amateur radio licence, visit Radio Amateurs of Canada (RAC).

RAC is a not-for-profit national association whose mandate is to liaison with government agencies about regulatory and spectrum issues that impact amateur radio on a national and international level.

About the Author: Barry Kerton

Barry Kerton is the managing editor of the Barrhead Leader, joining the paper in 2014. He covers news, municipal politics and sports.
Read more