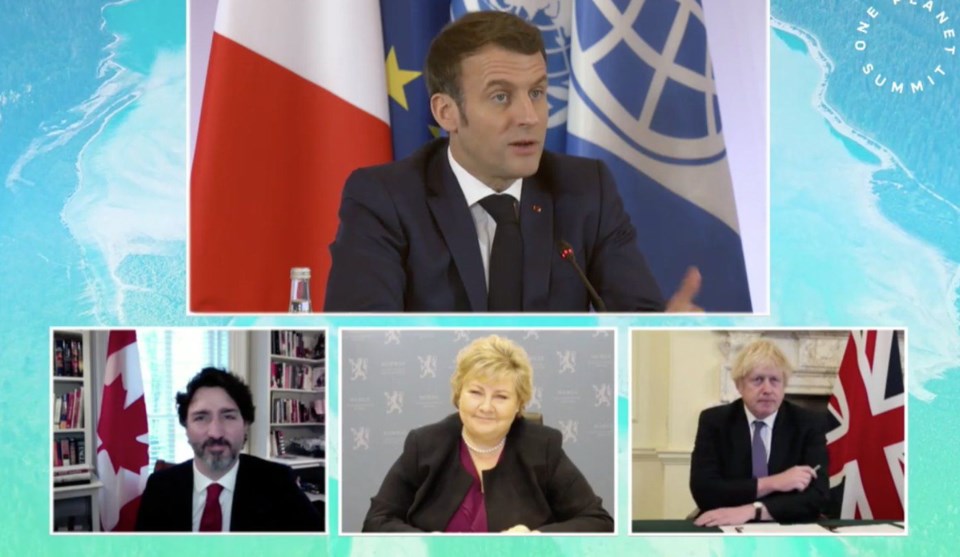 After the world failed to meet a single target last decade to stop the disappearance of the natural world, the leaders of several nations, including Canada, met for a virtual summit on Monday and committed to safeguarding biodiversity in future.

Prime Minister Justin Trudeau appeared by videoconference at the One Planet Summit, hosted by French President Emmanuel Macron, and announced that “up to $55 million” — drawn from green finance commitments made in 2015 and 2018 — would go towards a UN fund meant for projects that protect from desertification and other degradation of landscapes.

“If we do not act, the ecosystems on which we depend for our air and for our food will collapse. So we have a collective responsibility to protect nature, and Canada is playing its role,” said Trudeau.

“To be suggesting these kinds of piecemeal, inadequate solutions to really big problems is just not enough,” she argued. Paul is calling on the government to boost funding to federal departments to ramp up implementation of endangered species recovery plans.

The Greens have also been calling for $100 million annually for a minimum of four years to go towards Indigenous protected lands. Paul said those recommendations have been informed by Canada’s international commitments, like the UN’s Convention on Biological Diversity.

‘Until now, we have been destroying our planet’

There, they hope to set new goals following the disastrous outcome of the so-called “Aichi targets” where the world failed to achieve any of the 20 stated goals under the biodiversity convention.

Due largely to human activity, which has altered almost three-quarters of the Earth’s land and two-thirds of the marine environment, the planet is beset not only by a climate emergency but also a biodiversity crisis.

Over the last four decades, 60 per cent of global wildlife has disappeared, for instance, while a million species are facing extinction. In Canada, mammal populations are down over 40 per cent, while amphibian and reptiles are down by 34 per cent and fish populations by 20 per cent, according to the World Wildlife Fund.

This stunning loss of biodiversity is also linked with humanity’s deepening inequality, leaders heard on Jan. 11 at the summit. That’s because the countries currently bearing the brunt of biodiversity depletion, said Macron, are also the least prosperous.

“2021 must be the year to reconcile humanity with nature. Until now, we have been destroying our planet,” said UN Secretary-General António Guterres in a speech early on in the event.

“We have been abusing it, as if we have a spare one...we have been poisoning air, land and water and filling our oceans with plastic. And now nature is striking back.”

Canada’s $55-million contribution is going to the UN’s Land Degradation Neutrality Fund. The money is drawn from the Canada's $2.65-billion climate finance commitment, made in 2015, as well as a 2018 G7 Charlevoix commitment on sustainable financing.

Trudeau also said Canada would include funds for biodiversity as part of any future global climate finance contribution.

The prime minister took the opportunity to reiterate Canada’s promise to spend $3.16 billion to plant two billion trees over 10 years. And he said Canada is joining two international bodies; one is the High Ambition Coalition for Nature and People, which proposes a target of protecting 30 per cent of the world’s lands and oceans by 2030.

The other is a working group to develop a new task force on “nature-related financial disclosure,” which will be developing principles for corporations and financial institutions to disclose their dependencies on nature and the risks they face from nature.

The ultimate objective of that group is stop global financial flows from propping up businesses that are contributing to the destruction of nature — similar to other climate finance efforts meant to stop bankrolling heavy polluters.

European Central Bank President Christine Lagarde pointed out how the natural world supports the planet’s economic activity and accounts for roughly US$130 trillion.

Nature, she said, is “the most under-evaluated public good.”

Trudeau 'optimistic' that timeline for rollout of COVID vaccines can be accelerated
Mar 3, 2021 11:45 AM