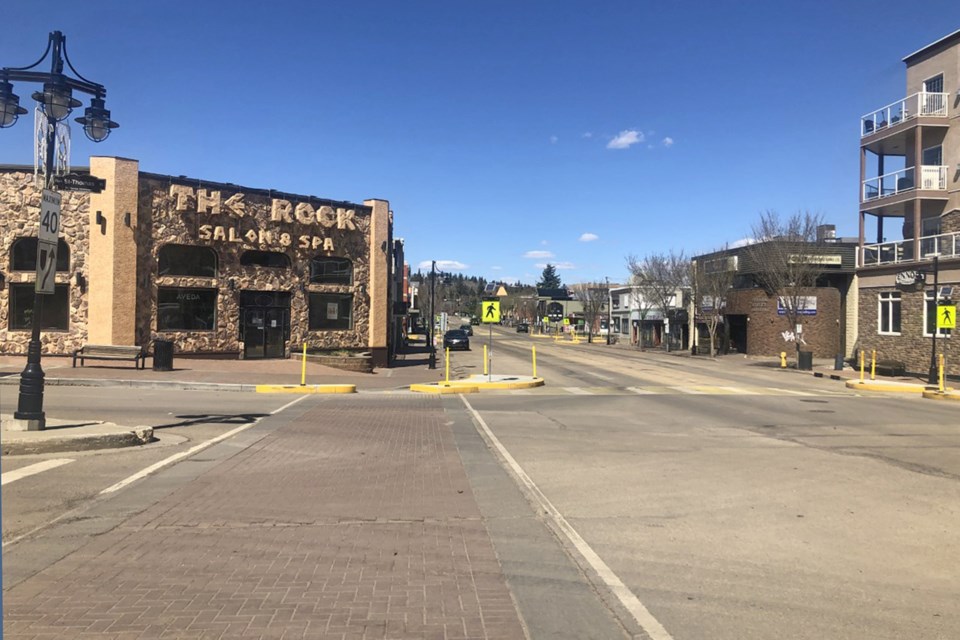 Traditionally, downtown areas are a core for entertainment, commerce, leisure and retail hubs all in close proximity to each other. In revitalizing the City of St. Albert’s downtown core in 2010, planners envisioned a vibrant, charming, and walkable community.

Currently, the downtown core receives limited vehicle and foot traffic. With the exception of the St. Albert Farmers’ Market launch on Saturday, the area is desolate, with more “for lease” signs popping up in windows. As a matter of survival, some businesses, who did not wish to be named, are looking at other locations in the region.

Unlike major business arteries such as St. Albert Trail and Bellerose Drive sustaining a considerable amount of movement, the downtown core heavily relies on events to attract pedestrian and vehicle traffic.

COVID-19 not only shut down the businesses for months at a time, it also forced the cancellation or postponement of major tourist draws such as the farmers’ market, Snowflake Festival, International Children’s Festival of the Arts, Rainmaker Rodeo parade, and fireworks nights on July 1 and Dec. 31. For most businesses, the final kicker arrived when the City of St. Albert announced road closures in May to construct safety features.

“It’s a combination of so many things. COVID shut us down, and when everyone opened, our roads were closed and that put us a month behind another month. And then there was the loss of the farmers’ market from in front of the store,” said Azam Ayoob, owner of The Wanted Leaf at St. Thomas Manor on Perron Street.

A St. Albert resident since 1984, Ayoob has operated various businesses within the city since 1986, including an optical store, a ceramic store, a sunglass shop and a tea shop. He is familiar with every aspect of business, from developing and handling supplies to managing staff and satisfying customers.

The frustration and anger Ayoob witnesses is the most vocal from the city-initiated Downtown Area Redevelopment Plan (DARP). At the time, DARP planners envisioned creating a "Whyte Avenue” styled retail sector, beautified with flower planters, bike racks, and street patios.

The idea was catchy, but it lost momentum. Retail stores, which require a good deal of traffic, had difficulty attracting shoppers, and the professional sector moved in. However, dental, medial, and insurance offices further reduced movement.

“Being in business for many years, I don’t see how it is beneficial to reduce the number of people that could become potential customers, not just to ourselves, but the entire area. If the entire area does well, we all do well. I’m not just talking from the business side. People coming to the market also benefit.”

While Ayoob does not recall being notified of market changes, Shawna Fetter, manager at Cloud 9 on St. Thomas Street said, “They (the chamber) told us it was because of traffic and emergency access. They couldn’t block the street because an access was needed for emergencies.”

Karen Moak, pharmacist and owner of Midtown Apothecary describes the market’s location on St. Thomas Street as “an amazing asset. Where it cuts into St. Anne Promenade, there’s no business there. How does that benefit business? The market doesn’t pay taxes. I’d like to bring back the energy and the charm to St. Thomas Street.”

Ayoob noted that all the small business owners invested significant amount of time, money, and resources into building both a business and a dream. He estimates most businesses have lost an average of 40 to 50 per cent of their earnings since opening downtown. During the pandemic, some lost much more.

“The changes that are occurring are way out of their control. Because there’s no debate, that increases their struggle.”

For Ayoob, the new St. Anne Street/St. Anne Promenade market location also shifted the vibrancy it previously brought to Perron and St. Thomas streets. He recalls the lively buskers, the music, the chatter.

“We have a memory of what it was like. Now it’s been taken away. We’ve lost that and we want it back, plain and simple."

Kelsey Bulmer, co-owner of Cerulean Boutique on St. Joseph Street, instead views the market as a “deterrent” to her high-end clothing boutique.

“Year after year on Saturday our sales drop 50 per cent. People don’t come by on Saturday with their kids in tow, and people who would come don’t because there is no parking. People are here to pick up fruit, vegetables, fresh pie, and have an outing. They’re not here to shop and be styled,” said Bulmer.

If anything, she is upset about market vendors not supporting the downtown core.

“They come and leave. They never stay after 3 p.m. The horn goes off and they leave. I wish they’d support the candy shop or get a cup of coffee downtown. We are the ones who pay taxes.”

Bulmer understands the market is a driver for some businesses.

“But it doesn’t do a lick of business for us. Look at the Bridal House. They left 10 years ago because customers couldn’t get parking on Saturday, one of their busiest days.”

She said the area has a great deal of potential. One idea might be to designate it as a pedestrian-friendly area similar to some of Calgary’s walkable areas.

“Right now, there’s not much benefit to having a business, let alone a business downtown.”

Curtis Crouse, the board chair for St. Albert Chamber of Commerce, sees the 2021 farmers’ market as a hopeful sign of recovery.

“The set-up (Saturday) couldn’t have been better for businesses downtown. There were thousands of people lined up outside their businesses – thousands. I don’t know what more we can do,” said Crouse.

He recognizes the issues businesses in the downtown core face, adding the chamber will continue to engage and support their members.

“We have had discussions with some members downtown. I went down myself and met with a member who had some concerns. What I saw on Saturday was unbelievable and an amazing opportunity to capitalize on. I have suggested that we start to get together and the chamber will be here as a resource,” said Crouse.

“We’re here, but at the end of the day, it’s not just a downtown business problem. All small businesses are struggling. There’s a lot of work to do. It’s really tough right now. I’m a small business owner. I understand it’s hard right now.”