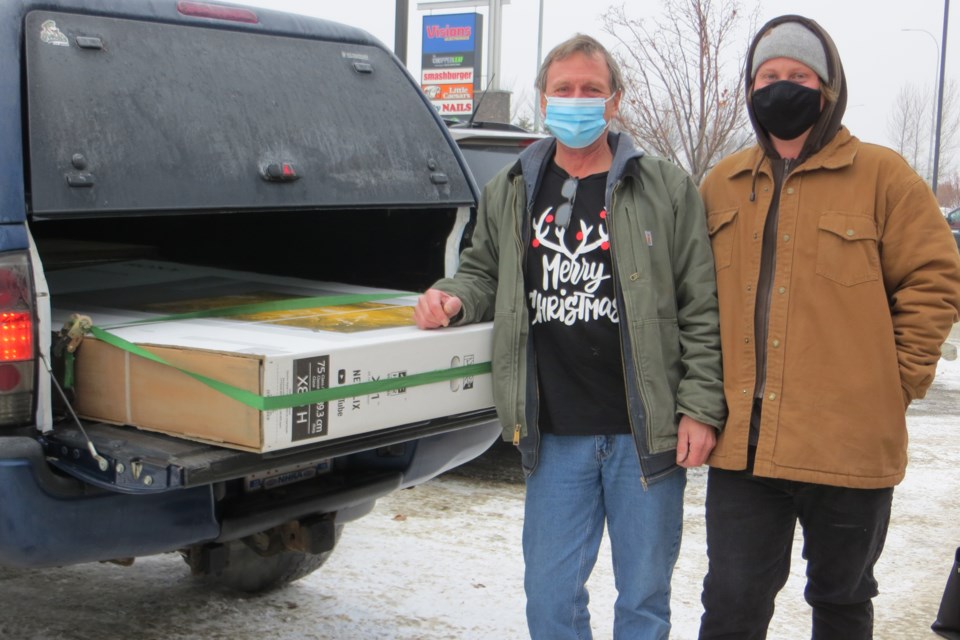 Shoppers slipped on coats and wore masks expecting long socially distanced lineups, only to find most stores were immediately accessible with only a few customers. Industry watchers had predicted this year’s post-Christmas shopping would be replaced with Internet searches and online orders.

One of the few exceptions was a queue of less than half-a-dozen deal-hunters outside Visions Electronics. The steady stream of in-and-out traffic suggested most shoppers knew what they wanted and purchased it.

Jolan Neumann was moving into a new house and stood in line to buy a 75-inch Sony TV priced at $1,400. It was marked down from its original ticketed price of $2,000.

“I did my research online. It had really good reviews and I bought it,” said Neumann.

Another deal-hunter, Zac Brown, received a new gaming desk for Christmas but his old chair didn’t fit. A fast Google search revealed Visions was offering a $599 chair for $329.

“You look at all the different places and you go with the least expensive,” said Brown.

“Boxing Day sales are quite different with COVID going on this year. We’re reduced to 15 per cent capacity just like every other business. But people are still shopping. We’ve got the same deals online and more people are shopping online,” Dunlop said.

EB Games was another popular store with a lineup of about eight different masked cohorts patiently waiting to snap up specially marked video games and accessories.

At HomeSense, a steady stream of people carried out massive shopping bags packed with goodies. All Christmas items were marked down 50 per cent.

“Boxing Day shopping is a tradition for us,” said Carole Simpson. “HomeSense usually has good stuff and good prices.”

At St. Albert Centre, Michael Hill Jewelers held a fire-sale on white gold diamond earrings marked down at $399 from the original price of $899. Despite the huge reduction, only a few eager shoppers were scanning glass showcases.

A few doors down, McBain Camera was holding an accessory sale ranging from 10 to 20 per cent. But when the Gazette stopped by in the afternoon, no customers were in the store.

“COVID killed a lot of foot traffic, but we still have motivated customers that buy things. We have fewer browsers but our shoppers know what they want and decide we are the place to shop,” said manager Warren Gamache.

With the economy in a tailspin, Gamache has also noticed people put more thought into where they spend money.

“People will stay interested in photography. It all depends on COVID. When this is over, photography walks will restart and photo clubs will reopen. I think we’ll see a notable spike in camera sales. We have great customers and we do well.”

Despite slashed prices of up to 70 per cent, retail outlets such as Warehouse One, Bellisima and Ricki’s appeared to have very little foot traffic. Most fashion retailers, some of the hardest-hit during the pandemic, started promoting Boxing Week sales prior to Christmas.

With a surplus of inventory on the market, sales may be stretched out as retailers have their work cut out figuring how to attract shoppers.