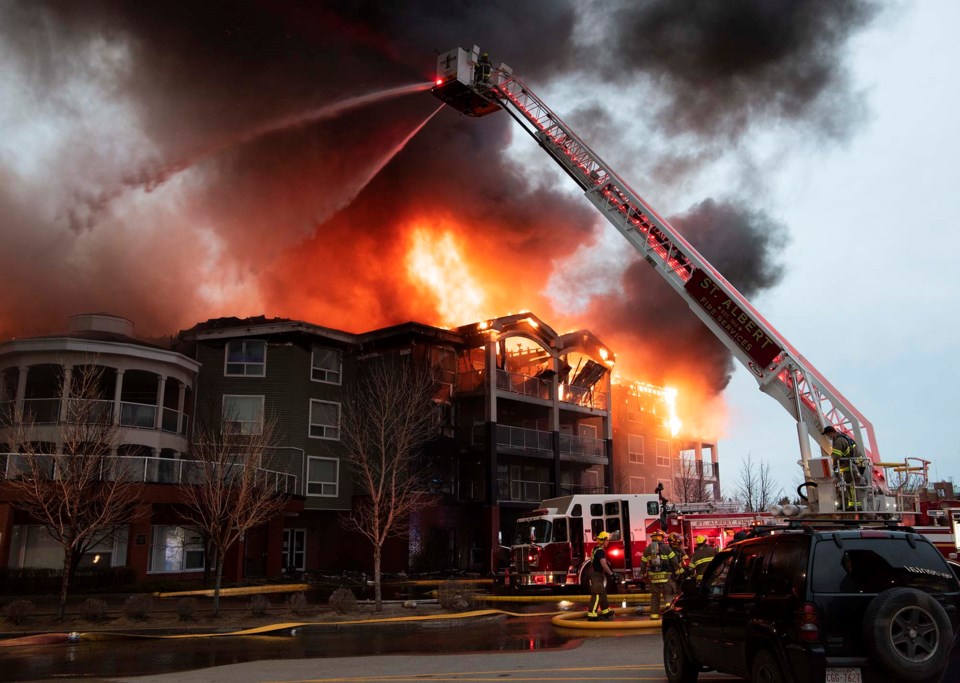 The May 6 Citadel Mews fire destroyed much of the south half of the fourth floor and displaced over 100 residents of the complex. Buttons Up owner Maureen Whiteman had to close the business for a day to take care of her mother-in-law, 86-year-old Lorraine, who was one of the people displaced even though her part of the building was not part of the fire. Kevin Ma/St. Albert Gazette

ATHABASCA — For all the chaos that occurred while first responders, staff, family members and strangers off the street helped residents of the Citadel Mews senior living facility in St. Albert evacuate from their homes as the building burned May 6, the Athabasca family of an 86-year-old woman in the continuing care facility next door that was also evacuated was unaware of what was happening 130 km down the highway.

Buttons Up owner Maureen Whiteman says they did not get the call until the next day that her mother-in-law Lorraine was one of 110 seniors displaced due to the fire so she hurriedly posted an announcement the store would be closed for the day.

“She wasn't in the actual building that burned, she was in the long-term care facility next door,” said Whiteman. “The two buildings were joined by a pedway.”

She added she had read fire crews had considered knocking down the pedway though.

“In an article I had read they had talked about maybe having equipment available in case they had to knock the pedway down to not have the fire move (buildings),” she said.

The three-building complex provides a full range of services for seniors with independent, supportive, and assisted living options, so as needs change they can move to another part of the facility and maintain familiar settings, the facility’s website says.

“There's the apartments where the fire was – kind of the self-sufficient people that need maybe some home care and stuff – and in the centre of the complex is the long-term care; full time care, and then on the other side is the assisted living,” said Whiteman. “They had shut the power off, and the fire of course was next door … but they had to evacuate the long-term care building as well.”

Arrangements were quickly made for residents to be put up in a nearby hotel, stay with family members or be moved to other healthcare facilities in the region and Lorraine was transported to Edmonton.

“I think there was 20 that went to the General Hospital and so there was, I think, a few different places that took people,” said Whiteman.

She said the elder Whiteman was confused by the events but otherwise in good health and was moved back to her apartment May 13.

“She has dementia; she’s not terrible, but she does have dementia,” said Whiteman. “So, she was confused, but it’s to be expected.”

All three fire halls in St. Albert responded to the blaze at about 8 p.m. that night and were joined by crews from Edmonton, Morinville, Strathcona County and Spruce Grove to battle what was described by mayor Cathy Heron as the biggest fire she had ever seen in the small city north of Edmonton.

On May 14, fire investigators announced they determined the fire started on an outdoor patio, spread to the furniture before catching the exterior wall on fire where it spread into the attic making the fire difficult to fight, but they have not been able to determine the cause.