“Many restaurants and similar operations have told us because they cannot pay their own bills right now, that this will allow them to fully access the federal supports and provincial supports as we get through the difficult following weeks."
Dec 9, 2020 11:15 AM By: Cathy Ellis 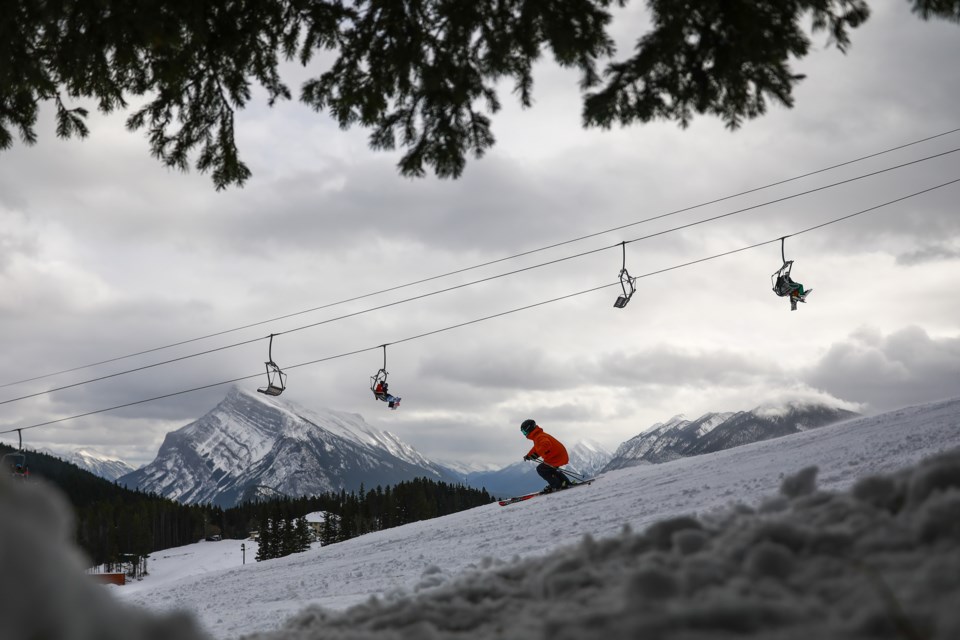 Mike Macdonald skis down the Cascade run at Mount Norquay Ski Resort in October. Recently announced COVID-19 measures in Alberta do not include any additional restrictions for ski hills. EVAN BUHLER RMO PHOTO

BANFF – Ski hills in Banff National Park will be allowed to remain open under new provincial government restrictions that shut down other businesses over the next four weeks to curb the rapid rise of COVID-19.

In announcing new restrictions on Tuesday (Dec. 8), including expanding the indoor social gathering ban to include outdoor social get-togethers and closing most businesses, Premier Jason Kenney said ski hills – such as Lake Louise, Sunshine and Norquay – can remain open.

“Alberta Health will work with operators to develop plans to avoid crowding and maintain safety measures,” he said.

“Hotels can also remain open, but will have to close pools, fitness centres, related services and restaurants.”

As a result, effective Dec. 13, retail and grocery store businesses will have to limit shoppers to 15 per cent of capacity, down form the current 25 per cent announced by the province two weeks ago.

All restaurants, bars, lounges and cafés will move to takeout or delivery only.

“Many restaurants and similar operations have told us because they cannot pay their own bills right now, that this will allow them to fully access the federal supports and provincial supports as we get through the difficult following weeks,” Kenney said.

Services such as entertainment facilities, casinos, libraries, museums, theatres and private clubs will also be closed. Travel shows and conference centres are to shut down, too.

Indoor recreation recreation facilities, including fitness centres, gyms, swimming pools and skating rinks, will be closed for the next four weeks.

Personal and wellness services such as hair salons, barbers, nail salons, massage, tattoo and piercing studios, for example, must also shut their doors.

Kenney said health care services such as dentistry, physiotherapy and social services, as well as emergency shelters and child-care centres will remain open.

“This importantly includes addictions counselling and group meetings,” he said.

In addition, all employees must work at home unless an employer requires a physical presence for operation of the business.

“This is moving from a recommendation from two weeks ago to a legal requirement,” Kenney said.

There were 109 active cases in Banff and Lake Louse reported on Dec. 8. In neighbouring Canmore, there are 49 active cases and in the MD of Bighorn, which includes Harvie Heights, Exshaw and Lac des Arc, 40 positive cases.

The state of local emergency remains in effect in Banff, with no plans of lifting it any time soon.

Mayor Karen Sorensen said she believes the new restrictions announced Tuesday by the provincial government were “the right thing to do” to keep people safe and prevent the spread of the virus.

“The cases in the Banff area are going down, but provincially that is not the situation,” she said.

With the forced closure of many businesses, Sorensen said those businesses can now access federal financial supports.

“With the business closures being directed by the province, which is who has the authority to do that, a lot of businesses in the community will be able to access federal financial aid, rather than continuing to struggle at a loss as they have been doing,” she said.

Sorensen said she understands the intention of keeping the ski hills open is to allow people to recreate outdoors.

“I also understand that ski hills are doing a very good job of putting protocols in place and doing what they can do to keep people safe, and I really appreciate that,” she said.

“In the few weeks because our businesses are closed, I have to assume that we won’t haves skiers stopping in here for drinks or dinner or shopping on their ski vacation.”

While hotels are allowed to stay open, some may voluntarily decide to close.

“The hotels are not doing well,” said Sorensen. “The last I heard was 10 and 20 per cent occupancy and that was before today.”

In his Tuesday afternoon address, Kenney said new cases, hospitalizations and deaths as a result of COVID-19 are growing at an “alarming rate.”

“We’re experiencing a surge in cases in hospitalizations and most sadly of deaths as the cold weather has caused people to move indoors and the virus spreads more quickly,” he said.

To respond to the growth of COVID-19 hospitalizations, Kenney said thousands of surgeries and other medical procedures have been postponed or cancelled.

“For every one of those people affected, this means anxiety, stress, sometimes it means real physical pain and suffering as their health deteriorates,” he said.

“For some Albertans, delaying their health care will tragically mean a shorter lifespan.”

If Alberta is not successful in bending down the curve, the number of hospitalizations will continue to increase.

“That means more cancelled surgeries, more delayed health, more strain on our emergency and intensive care wards,” Kenney said. “It means more deaths, especially among our most elderly and vulnerable.”

Kenney said the the heath-care system has the capacity – if stretched – to treat more than 2,000 COVID-19 patients in hospital beds and hundreds in intensive care units.

“But we know that if we allow viral spread at current growth rates, we will eventually run out of hospital capacity,” he said.

“If you think that's exaggerated, just look at what’s happened in several U.S. hospitals south of the border to see the tragic reality of uncontrolled growth of the virus.”

Up until now, Kenney said the government has preferred to take a regional approach with its COVID-19 restrictions, but concluded this is no longer a viable option.

“In fact, 97 per cent of Albertans live today in a local geographic area with more than 50 active COVID cases per 100,000 population – and that was our key threshold,” he said.

“The virus is spreading at an alarming rate in every region of the province.”