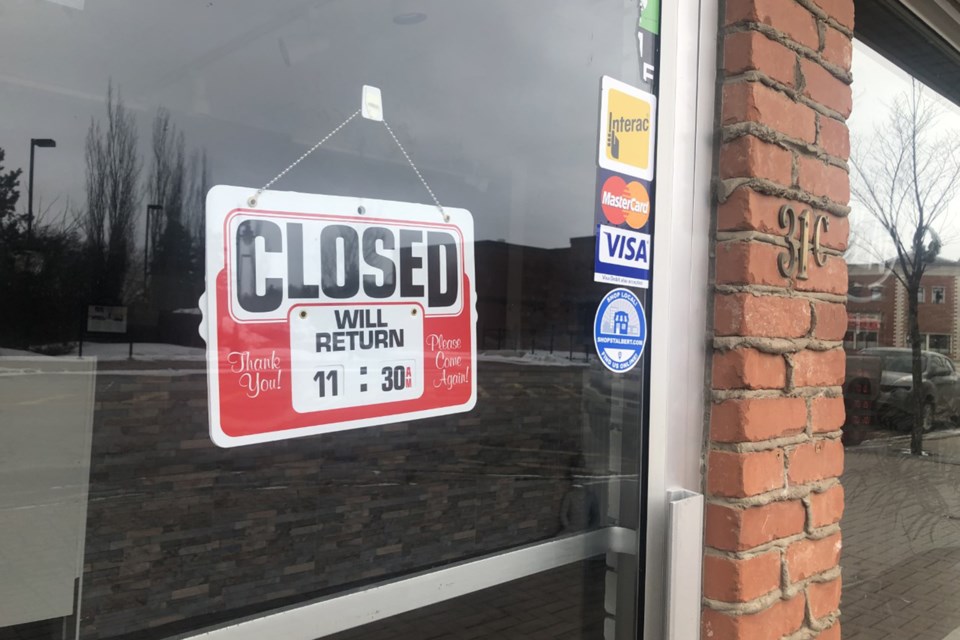 A closed sign posted to the front door of a business on Perron Street in St. Albert. BRITTANY GERVAIS/St. Albert Gazette

The St. Albert and District Chamber of Commerce is hopeful new supports announced by the province on Friday will help small- and medium-sized businesses struggling to reopen amid the COVID-19 pandemic.

"I think the majority of businesses will be able to do some type of uptake on it," said Jennifer McCurdy, president and CEO of the Chamber.

The provincial government is committing up to $200 million in funding for businesses and non-profits with fewer than 500 employees to offset a portion of their relaunch costs. The amount would total 15 per cent of a business’ average reported revenue, up to $5,000, according to Premier Jason Kenney.

These funds can be used for implementing measures to minimize the risk of virus transmission, such as physical barriers, personal protective equipment (PPE) and disinfecting supplies, rent, employee wages or replacement of inventory.

Last month, the province announced businesses would have to start purchasing their own PPE at market prices starting July 1.

These extra reopening costs have been a "huge concern" for St. Albert businesses, McCurdy said.

According to the latest survey from the Canadian Federation of Independent Businesses, 52 per cent of Alberta respondents said they were concerned PPE will become a "significant cost" to businesses.

"The Plexiglass barriers, signage and personal protective equipment hasn't been cheap. It's an added cost on businesses that just don't have any extra revenue coming in," McCurdy said.

"There's a shortage of so many things. People are trying to get refills for the automatic hand sanitizer machines, and you just can't get it right now. People have been scrambling to get the most reliable product they can for a good price, and this will help them."

To help businesses find suppliers, the St. Albert and District Chamber has a list of products available for purchase on their website, including hand sanitizer, gloves, masks and more.

While the province has set a maximum of $5,000 for the loan, McCurdy said it would have been helpful to know if there was a minimum as well.

Details around how exactly the amount will be calculated have yet to be released. Online applications for the new loan are expected to open in the coming weeks, according to the province.

Being able to afford rent remains one of the top concerns for Alberta small business owners, and the province has heard of many cases where landlords are not signing up for the federal government's Canada Emergency Commercial Rent Assistance (CECRA) program.

Some are threatening to evict their commercial tenants, a response Kenney called “unacceptable.”

To provide some eviction relief, the provincial government is planning further measures including legislation to ensure commercial tenants will not face rent increases or be evicted for non-payment of rent due to the COVID-19 pandemic.

"I think the government realized the original program put all the power in the landlord's hands, and that just created a lot of anxiety for the tenants because they didn't know if they were going to be able to participate in the program," McCurdy said.

Additional details are expected to be finalized during the current summer session.

Most landlords in St. Albert have been working together with their tenants on rent relief, but McCurdy said she has heard a few cases where landlords have threatened to evict their tenants or have decided they wouldn't participate in the program.

"We all know that the rent is the highest fixed operating costs for businesses at this time, so it has created a lot of anxiety. I believe this program is going to give a lot of the tenants some relief, knowing that they cannot be evicted and that their rents will not be increased."

More than half of respondents said rent relief could make the difference between their business surviving COVID-19 or having to shut down, according to a May CFIB survey. Twenty per cent said they feared being evicted.

During a virtual townhall discussion put on by City of St. Albert Economic Development on Tuesday, Sean Warshawski with Ritzen Warshawski LLP said the CECRA is "extremely onerous" for landlords.

The CECRA provides forgivable loans to eligible landlords to fund 50 per cent of a tenant’s rent for three months, with the tenant paying another 25 per cent. Landlords then have to absorb the rest.

The landlord is responsible for filing the application. They have to be willing to take a pay cut, open themselves up to potential liability, keep detailed expense documents, engage legal counsel, and potentially pay back the loan in case of default.

"Unless they do some changes to the program, there's going to be concern for the uptake from landlords and frankly, tenants left behind."

If landlords want viable tenants after the COVID-19 pandemic, Warshawski said he advises all landlords to work with their tenants to find a solution, which could include rent deferrals or the Canada Emergency Business Account (CEBA).

Alberta expands gatherings for outdoor audience events to 200 people
Jun 30, 2020 11:10 AM
Comments
We welcome your feedback and encourage you to share your thoughts. We ask that you be respectful of others and their points of view, refrain from personal attacks and stay on topic. To learn about our commenting policies and how we moderate, please read our Community Guidelines.