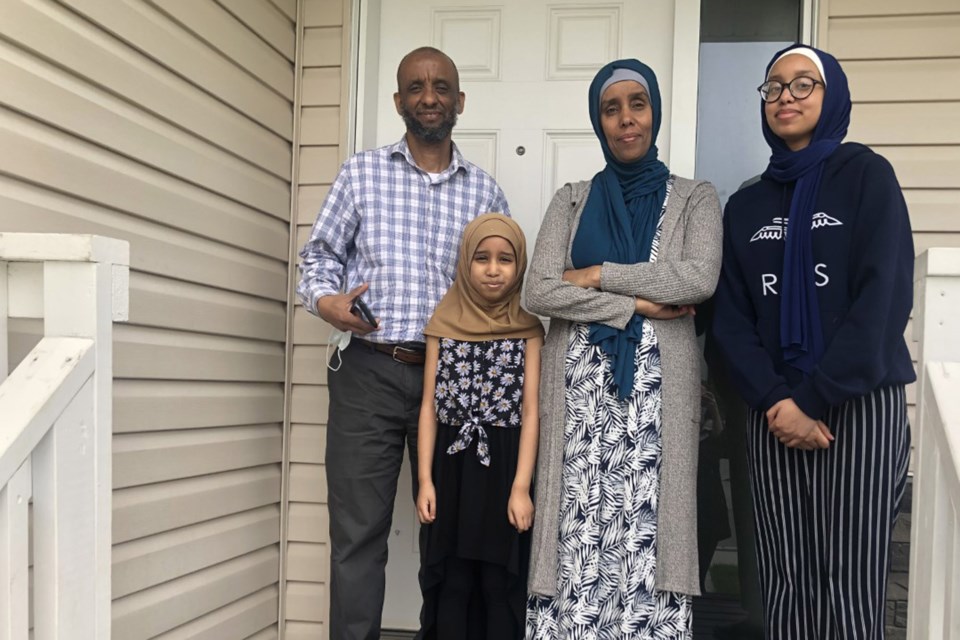 From left: Abdurehman Zakaria, Khadija Zakaria, Maria Ahmed, and Sumeya Zakaria (Israh and Huzaifa Zakaria not pictured). Without mediation, the family of six could be forced out of their Habitat for Humanity Edmonton home July 31. BRITTANY GERVAIS/St. Albert Gazette

The Zakaria family was not expecting to pack up their home in Akinsdale this summer.

After a year of renting with Habitat for Humanity's Aurora Place development, the family of six was expecting to sign a mortgage agreement for their home in April 2019.

That housing program allowed low-income families to put in 500 hours of "sweat equity" with Habitat as a down payment in exchange for tenancy and eventually, interest-free homeownership.

"We all had this dream of an interest-free mortgage," said Abdurehman Zakaria, father of four. The Muslim family has been renting for years because it goes against their religion to pay interest.

Then last fall, Habitat Edmonton changed its mortgage agreement. Instead of a zero-per-cent mortgage financed through the non-profit, half of the home's mortgage would have to come from a bank with interest.

Even if they were to sign, Abdurehman said he is worried whether they would qualify for the loan. He had to stop working due to the pandemic, and his wife Maria Ahmed just secured a part-time job.

"That makes it even more complicated," he said.

The Zakaria family was one of 57 low-income families who filed an injunction request asking the court to stop any removal orders while they pursue a class-action lawsuit, but their request was dismissed by the Court of Queen's Bench in early June.

On June 9, Habitat sent an email to the Zakaria family telling them they had two options: agree to sign under the new model by June 30, or sign a release to end tenancy and leave by July 31.

Under that second option, Habitat offered to pay a settlement to families struggling to make it work, but the amount was reduced if they did not provide a written notice by the end of June stating they would be leaving.

This meant the Zakaria family had less than two months to pack up all of their belongings, most of which are now gathered in boxes stacked throughout their home, and begin the search for an affordable rental unit big enough to house six people.

All the while, Abdurehman and Ahmed had to take on the difficult task of preparing their children to move to another neighbourhood and another school, in the middle of a pandemic.

"How are you going to claim that Habitat for Humanity is helping people to get a home? They are kicking us out in this pandemic, and they say that they're helping? This is not helping," Ahmed said.

A mother of two living in a buy-back Habitat home in St. Albert said she will be considering joining the class-action lawsuit depending on whether she qualifies under the new agreement. She requested her identity be kept confidential to protect her privacy.

One of her friends in the neighbourhood signed under the old agreement and is thriving, she said. That's all she wants for her family.

"That's my biggest concern is whether I'll qualify for it, because I told my kids already we have a home forever. A year later, that might change," she said.

Habitat Edmonton is facing $27 million in debt as funds coming into the organization were being spent to cover the cost of borrowing for building expenses, and to fund vacant home buybacks. That left no funds to sustain future construction.

Chris Bruce, board chair and interim leader, said the intent was for the new model to allow Habitat Edmonton to build homes to meet increasing demand, while giving families the opportunity to build credit and benefit if their home gains value by the time they sell it.

"We do acknowledge that our new mortgage model wasn't introduced or communicated as clearly as it should have been," Bruce said.

Habitat for Humanity International senior vice-president Adrienne Goolsby said the organization was "highly concerned" about the new mortgage model in a statement on June 23, urging a halt to further action in the case until an independent mediator is appointed. Days later, Habitat Edmonton CEO Karen Stone stepped down from her role with the charity.

On June 30, Bruce said Habitat Edmonton agreed to enter into a mediation process with the families to settle the months-long dispute out of court. No evictions have been planned and no families currently renting Habitat homes will be asked to leave during discussion and mediation, he said.

When asked if families who cannot sign the new agreement will be allowed to remain in their homes, Bruce said "other alternatives available to them" will be explored during the mediation process. He said he has spoken to other families who have qualified and are satisfied with the new model.

"We're very confident that this will be a fair and quick resolution for all the families, whether they choose to stay or not."

Avnish Nanda, an Edmonton-based lawyer representing the 57 families on the class-action, said he wants Habitat to come to the table willing to negotiate. None of the families he is representing qualify for the loan, he said.

"They apply, they get rejected, and then they're like, 'What's next?' Habitat's just telling them to get out, we have to give this to another family who can qualify. That's the worst-case scenario," Nanda said.

"These are people who are extremely vulnerable."

Knowing finding legal representation would be challenging and costly for families, Nanda said he agreed to represent them pro-bono. On the flip side, Habitat Edmonton is an $80-million organization represented by "one of the biggest firms in Edmonton," he said.

"It's just been this David-and-Goliath battle."

However, he said he is hopeful both Habitat and the families can come to a resolution.

"We're optimistic we can enter mediation and come to a result where every family is determining for themselves if they want to go to the new model or see the old model, but it can't be forced on the families."

The case has a personal connection for Nanda. Before COVID-19, he said he would meet with the affected families weekly to talk about the case in the low-income Edmonton neighbourhood he grew up in.

"Often they have young kids and they're working two or three jobs just to make ends meet," he said. "I look at them and I think, 'They could have been my parents, trying so hard to create a better life for their kids.'"

Coun. Wes Brodhead, who sat on council when Aurora Place was in development, said he can understand the financial troubles Habitat Edmonton is going through, but families deserve the agreement they were promised. The mediation process should find a solution that works for everyone, he said.

"My hope is these families are able to stay in their homes. Nobody wants to see them leave."

Mayor Cathy Heron said while Habitat's new mortgage model may not work for everyone, it does offer benefits to families who do qualify, like being able to build a credit history. She said she wouldn't want to see Habitat endanger future builds due to financial strain.

"Within the region, there are models and programs that will help people under different circumstances. Habitat fills only a small piece of that," she said.

"If these couple of families don't work under the Habitat model, we'll find somewhere else that will work for them. And unfortunately, it might be renting, but I wouldn't want to jeopardize future Habitat builds as they transition to this new mortgage agreement ... We all have the same goal of trying to keep the roof over people's heads."

Meanwhile, the Zakaria family has stopped packing with the tentative hope the mediation process will allow them to sign under the old agreement. But they aren't afraid to follow the case to court if mediation talks fall through.

"The only difference I see on the statement now is they will hold mediation, nothing else," Abdurehman said. "Everything is the same. And then we'll have to fight harder."

Mixed feelings from St. Albert parents on back-to-school
Aug 5, 2020 11:00 AM
Comments
We welcome your feedback and encourage you to share your thoughts. We ask that you be respectful of others and their points of view, refrain from personal attacks and stay on topic. To learn about our commenting policies and how we moderate, please read our Community Guidelines.