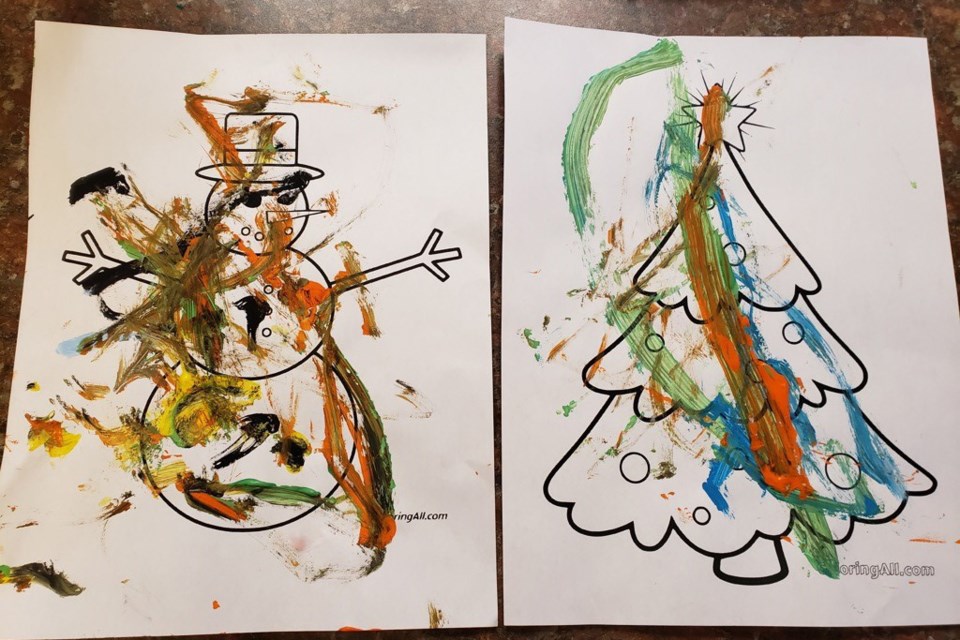 Children are keeping busy at home while the Boys and Girls Club is closed due to a COVID-19 outbreak. Pictured is some of the artwork that's been created by children as they spend more time at home. Photo supplied.

ST. PAUL - An outbreak has been confirmed at the Boys and Girls Club St. Paul & District after nine staff members of the daycare tested positive for COVID-19 in the past week, along with four children also testing positive.

All staff at the St. Paul daycare have now been tested for the respiratory virus, with five staff testing negative.

"We now have a confirmed outbreak and all close contacts and positive COVID cases are being individually contacted for further instruction," says Joelene Hazen, executive director with the Boys and Girls Club, Thursday afternoon.

Some of the staff members are starting to exhibit symptoms, such as a loss of smell and taste, phlegm, sinus, chest pain, and shortness of breath while moving around, according to an update from the daycare.

"All positives and close contacts are isolating at home now. Some of the educators are still asymptotic while others are showing mild to moderate symptoms," says Hazen. "Three of the four children had a mild fever for one night and the fourth is still asymptomatic."

None of the out of school care staff or children tested positive for the virus.

"Everyone is recovering and spending time with their loved ones. Parents are sending pictures of the creative crafts they are doing with the children at home, as the kids are missing their friends and educators," says Hazen. "We would like to thank all our families and the community for your patience and support in this evolving situation."

Hazen says the facility had a lot of support from its licensing officer, Alberta Health Services, and the CDC.

While parents have been very understanding of the situation, and have been happy with the organization's transparency in reporting confirmed cases, information gathered on Thursday regarding isolation periods for families that have children who tested positive has been weighing heavy on some.

The club received information stating a parent's 14-day isolation starts after their child is done their isolation, which means some parents can't return to work for a minimum of 24 days, explains Hazen.

But in the end, "The safety of our club members, staff and volunteers, and our community is our number one priority,."

Hazen also notes that there will likely be financial challenges ahead for the organization, as the outbreak has affected their ability to work an upcoming casino. A previous casino, scheduled to be held earlier in the year, was also cancelled.

Since reopening its doors in July, staff at the daycare have strictly followed all of Alberta’s Public Health’s guidelines for childcare centres, confirms Hazen.

"We have suspended operations while they conduct their investigation, and as a precaution to protect our club members and staff."

She adds, "With the approval of the CDC and licensing staff we are aiming on opening the centre for Dec. 1."

Alberta government risks public buy-in on COVID-19 by withholding info: Opposition
Nov 21, 2020 2:30 PM
Comments
We welcome your feedback and encourage you to share your thoughts. We ask that you be respectful of others and their points of view, refrain from personal attacks and stay on topic. To learn about our commenting policies and how we moderate, please read our Community Guidelines.