TORONTO — Some of Canada's top airlines, banks and sports teams have united to pilot rapid tests identifying COVID-19 in hopes that they can find a way to reopen workplaces.
Feb 1, 2021 3:45 PM By: Canadian Press 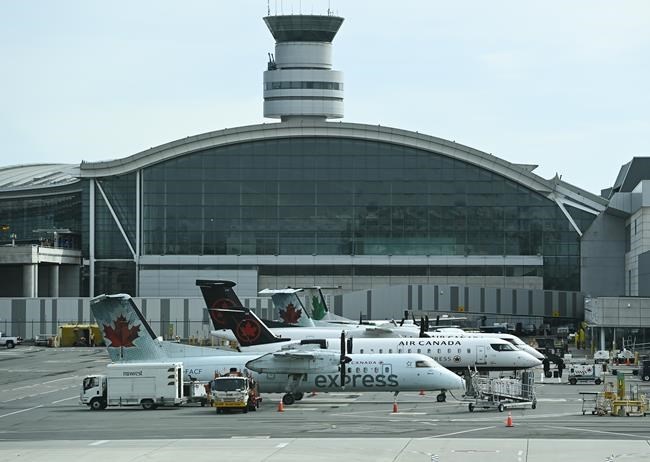 TORONTO — Some of Canada's top airlines, banks and sports teams have united to pilot rapid tests identifying COVID-19 in hopes that they can find a way to reopen workplaces.

The pilot is being run by the University of Toronto's Creative Destruction Lab, which has partnered with 12 companies including Air Canada and Rogers Communications Inc. to experiment with antigen tests that take about 15 minutes to deliver results.

Those behind the project believe it could give Canada's corporate world a road map to quelling the spread of COVID-19 in workplaces that have had to close or have struggled to contain outbreaks.

"What we are trying to do is break the chain of transmission," said Ajay Agrawal, the founder of the Creative Destruction Lab, a non-profit helping science and tech firms.

"We are using screening to stop one infected person from infecting other people in the workplace."

Rogers Communications Inc. and Air Canada were the first two companies to begin the testing and in late January were joined by Suncor Energy Inc. and Maple Leaf Sports and Entertainment, Agrawal said.

It wasn't hard to get the companies on board, said Agrawal, because everyone is eager to reduce the spread of the virus and lift severe lockdown measures that have closed businesses across Canada and forced others into bankruptcy.

"I think they look across the country and all they see is carnage. Economic carnage," said Agrawal.

His lab got executives from the companies together at the start of the pandemic when he realized that a "novel" health crisis would also need novel solutions.

They formed a "vision council" and convinced Mark Little from Suncor, Galen G. Weston of Loblaw and Shoppers Drug Mart and Don Walker from Magna to join.

After presentations and poring over plenty of numbers, they decided to put up their money and time and agree to share data as they experiment with rapid testing.

Two retired military generals with experience in Afghanistan were called in, and they began rehearsing how to make the testing as efficient as possible.

They reduced the entire screening process from seven minutes per person to 90 seconds.

"They keep trying to chisel down the time and expense," Agrawal said.

The pilot tests workers twice a week and makes use of millions of rapid tests obtained by the federal government and dispersed across provinces, who were allowed to allocate them for businesses.

Those in the pilot who get tested are allowed to continue with their work. When the results arrive roughly 15 minutes later, anyone with a positive result is contacted immediately and asked to take a polymerase chain reaction (PCR) test.

Agrawal considers the PCR tests the "gold standard" because they're considered to be more accurate than rapid tests and are being used by most provincial COVID-19 assessment centers.

He expects the rapid tests will generate some false positives, but not many.

"So far, there's only been a few cases and they've all been confirmed by the PCRs," he said.

Once the kinks are all worked out, Agrawal hopes to scale the system quickly, but he warns rapid antigen tests can't work alone.

"They're not going to solve (COVID) alone, but when we combine them with other things like PCRs and rolling out the vaccines, they're just one piece of the puzzle, but a critical one."

This report by The Canadian Press was first published Feb. 1, 2021.