With this week's new deliveries, there will be fewer than a quarter million doses of vaccine available to be injected this week.
Feb 8, 2021 12:15 PM By: Canadian Press 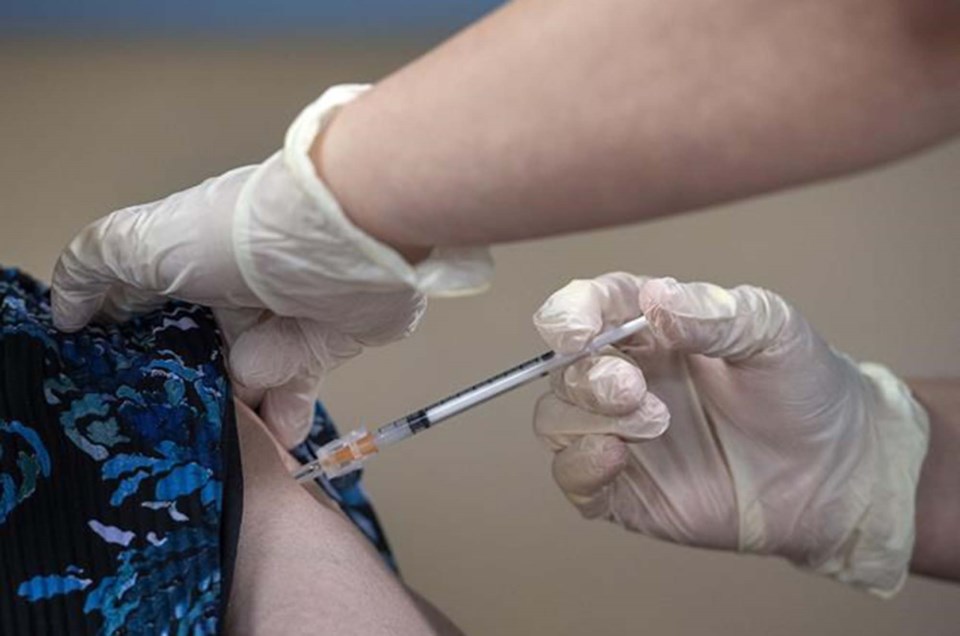 Amanda Parsons, a registered nurse on staff at the Northwood Care facility, administers a dose of the Moderna vaccine to Ann Hicks in Halifax on Jan. 11, 2021. In a bid to control COVID-19, the federal government plans to make free vaccines available to everyone who lives in Canada over the course of 2021.THE CANADIAN PRESS/Andrew Vaughan-Pool

OTTAWA — Canada's languid vaccination efforts have no chance of improvement this week with just 70,200 doses of the Pfizer-BioNTech vaccine scheduled to start arriving.

Provinces and territories have already administered almost 90 per cent of the vaccines they have been sent. With this week's new deliveries, there will be fewer than a quarter million doses of vaccine available to be injected this week.

Maj.-Gen. Dany Fortin, the military commander in charge of the Public Health Agency of Canada's vaccine distribution plan, has said this should be the final week of smaller shipments from Pfizer-BioNTech, which cut Canada's deliveries by more than two-thirds over four weeks while a production site in Belgium was expanded.

Next week Canada is supposed to get around 335,000 doses, which would be the single biggest vaccine delivery to Canada thus far. Pfizer says almost 400,000 doses are to come the week after that.

Moderna, the only other company with a vaccine approved in Canada so far, delivers its vaccine once every three weeks and its next scheduled shipment isn't supposed to be until the week of Feb. 22.

The company also shorted Canada on expected doses during last week's delivery, a problem the company attributed to a slower-than-expected ramp-up of production with its Swiss-manufacturing partner Lonza.

However Fortin said the company hasn't given Canada a specific reason for the slowdown.

Health Canada could approve a third vaccine for use this week, this one from AstraZeneca.

Two more are also being reviewed, with Johnson and Johnson's vaccine possibly ready for a decision by the end of February, and Novavax's potentially by April.

The three together would more than double the available doses to Canada this year, but the federal government has remained tight lipped about when any of the vaccines would start being shipped.

Canada could get about 500,000 doses of AstraZeneca's vaccine from the global vaccine sharing program known as COVAX before the end of March, though it has been heavily criticized for taking vaccines from a program that is also distributing doses to poor countries that have no direct deals with vaccine makers of their own.

AstraZeneca has also run into some concern, with South Africa cancelling the planned rollout of that vaccine when it was found to not be that effective against the B.1.351 variant of the novel coronavirus, a variant first found in that country and which now dominates the cases there.

It has been effective against the B.1.1.7 variant first found in the United Kingdom. As of Friday about 240 cases of that variant had been diagnosed in Canada and more than a dozen cases of B.1.351.

Both appear to transmit more quickly.

Weekly projections on vaccine distribution from the public health agency are fluid and subject to change.

Prime Minister Justin Trudeau has maintained that delivery delays are temporary, and that Pfizer and Moderna tell him Canada is still on track to receive six million doses of their two vaccines by the end of March.

Health Canada projects with Pfizer-BioNTech and Moderna alone they will vaccinate three million people by the end of March, another 10 million in the spring, and any other Canadians who wish to be vaccinated by the end of September.

There were no new vaccines delivered to the provinces and territories on Sunday, leaving a total of 1.2 million doses delivered so far.

The provinces reported 11,885 new vaccinations administered Sunday for a total of about 1.08 million so far. About 175,000 people have received both required doses, and about 900,000 have received one dose thus far.

This report by The Canadian Press was first published Feb. 8, 2021.