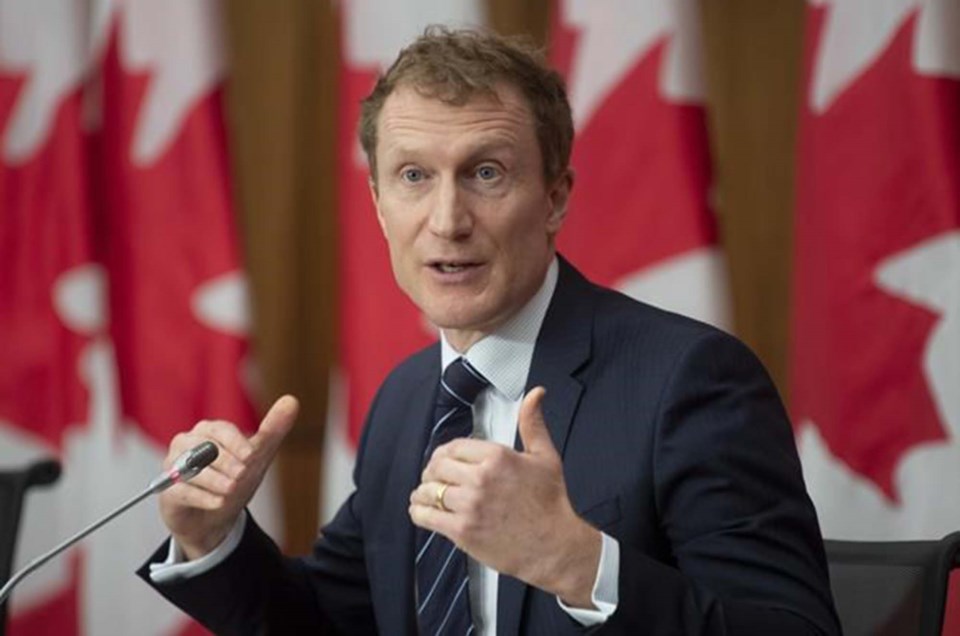 Indigenous Services Minister Marc Miller responds to a question during a news conference on Feb. 4, 2021, in Ottawa. THE CANADIAN PRESS/Adrian Wyld

Canada has seen nearly a 30-per-cent drop in active COVID-19 cases over the past two weeks, but the country's chief public health officer says strict measures should remain in place as more contagious variants of the virus threaten to derail this downward trend.

Tam said the daily federal tally has also been trending downwards, with an average of 4,061 new infections reported per day over the past week.

She said this slowdown has led to a gradual decline in severe COVID-19 outcomes. Over the past seven days, an average of 3,711 patients were treated in hospitals each day, including 792 in intensive care.

Even with this decline, Tam said the current caseload continues to burden local health-care resources, particularly in regions with high infection rates.

"The risk remains that trends could reverse quickly," Tam said in a statement, noting that the spread of the virus is accelerating in some parts of the country and outbreaks continue to occur in high-risk communities.

"These factors underscore the importance of sustaining public health measures and individual practices and not easing restrictions too fast or too soon.

"This is particularly important in light of the emergence of new virus variants of concern that could rapidly accelerate transmission of COVID-19 in Canada."

Indigenous Services Minister Marc Miller echoed this call for continued vigilance Thursday as his department reported that the number of people with COVID-19 in First Nations communities has declined to the lowest point since Dec. 6, with 1,869 active cases reported as of Wednesday.

Miller said more than 64,000 doses of COVID-19 vaccines have been administered to First Nations on reserve, Inuit and in the territories as of Feb. 3. But as authorities wait to see how Canada-wide delays in vaccine shipments will impact the rollout, Miller warned this isn't the time to let down our guards.

A spokeswoman for the company says it will still deliver two million doses total by the end of March. The company has delivered about half a million thus far, leaving 1.5 million for the only two shipments planned after this week before that deadline.

Maj.-Gen. Dany Fortin, the military commander managing logistics of vaccine deliveries for the Public Health Agency of Canada, said Canada doesn't expect to get the 249,600 doses it was initially allocated for the Feb. 22 shipment either.

As federal authorities urge restraint, Manitoba is considering loosening restrictions to allow restaurants, lounges, gyms and churches to reopen at a reduced capacity.

Current measures expire next week and the province is seeking public feedback about changes moving forward.

Non-essential businesses were forced to close in November as COVID-19 infections and deaths surged.

In Alberta, the province said it has 68 variant cases of COVID-19, up 11 from the day before. Seven of the cases have no known link to travel.

Dr. Deena Hinshaw, the chief medical officer of health, said the higher numbers are concerning but noted, “We are currently able to test almost every single positive COVID case for variant strain, so that does help us detect more that are out there so we can contain them.”

Meanwhile, Ontario is considering cancelling March break as it moves to reopen schools that remain shuttered in southern parts of the province.

Public Health Ontario released data Thursday indicating that mutations were found in 5.5 per cent of COVID-19 cases screened on a single day in January, most of them linked to a deadly outbreak at a nursing home in Simcoe-Muskoka.

Officials say more will be revealed about the prevalence of variants in the province as testing ramps up.

In Quebec, junior college and university students will be gradually welcomed back to campus starting next week, offering an alternative to the online education they've received since last March.

Students will be allowed to attend in-person classes at least once a week, and eventually, up to several times a month, Higher Education Minister Danielle McCann told reporters Thursday. Classrooms will be capped at 50 per cent capacity.

British Columbia also announced that it's expanding its mask mandate in schools, requiring students in middle and secondary school and staff for kindergarten through Grade 12 to wear face coverings in all indoor areas.

The B.C. Teachers Federation welcomed the change, but said more could be done.

"Today's changes will make schools safer and that is welcome news. However, the changes do not include improvements to school density, ventilation or the ongoing inadequacy of contact tracing," union president Teri Mooring said in a statement.

And in Saskatchewan, the head of a nurses union urged the provincial government to outline plans to deal with a more infectious strain of COVID-19 after a third variant case was reported.

“We need to be … much more vigilant and much more transparent on ... figuring out if we have the variants, where they are, and how people should protect themselves," said Tracy Zambory, president of the Saskatchewan Union of Nurses.

The Ministry of Health said earlier this week that officials will consider variants when deciding what to do about public health orders set to expire on Feb. 19.

This report by The Canadian Press was first published Feb. 4, 2021.