Canada is unlikely to get any doses from those three companies directly until at least April.
Feb 7, 2021 11:15 AM By: Canadian Press 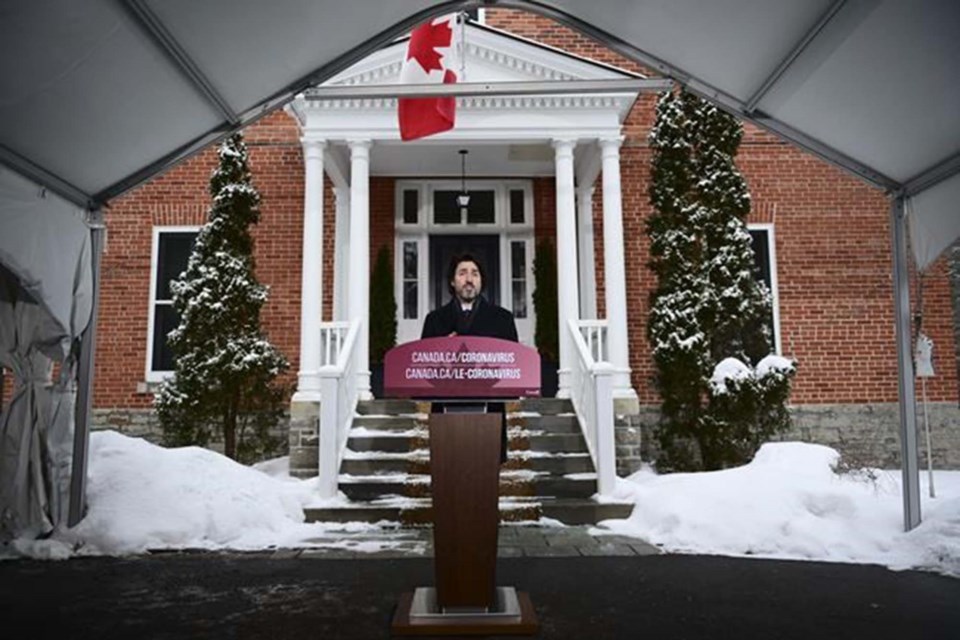 OTTAWA — The number of Canadians vaccinated in the spring could double if Health Canada gives the green light to all three vaccines it is currently reviewing.

But Canada is unlikely to get any doses from those three companies directly until at least April, and confusion about deliveries of vaccines has thrown Canadian confidence in the Liberal government's vaccine rollout into a tailspin.

Prime Minister Justin Trudeau added to the confusion directly Friday when he said at a news conference outside his Rideau Cottage residence that he believed the 20 million doses Canada pre-ordered from AstraZeneca are to be delivered before the end of June.

But he was wrong. Federal officials from Public Services and Procurement Canada clarified there are potentially 20 million more doses coming in the spring but that is a combination of doses from all three companies with vaccines now under review by Health Canada. That includes AstraZeneca, but also Johnson and Johnson and Novavax.

The reviews are in varying stages. AstraZeneca's COVID-19 vaccine is potentially ready for approval next week. Approval of Johnson and Johnson's vaccine will likely not come until late February or early March and Novavax not until April.

Procurement Minister Anita Anand told the House of Commons health committee Friday afternoon that AstraZeneca's deliveries will be split up between the second and third quarters of the year.

"That is in our contracts,” Anand said.

Those contracts remain shrouded in secrecy, leaving opposition MPs and provincial premiers irate, as expected vaccine deliveries are delayed and injections slow to a crawl.

The federal government says with the two vaccines already approved — Pfizer-BioNTech and Moderna — Canada will get enough doses to vaccinate three million people by the end of March and another 10 million by the end of June. They also say all Canadians who want to be get the vaccine will be able to do so by the end of September.

Another 20 million doses could double the spring vaccination goal.

There is little clarity about how many doses provincial and territorial governments can expect to receive beyond next week, let alone what could come in the spring. The numbers have repeatedly changed in the last few weeks as suppliers face production issues and promised deliveries are slashed.

Anand said the contracts do not stipulate week-by-week shipments, but rather set out how many doses are to be sent by the end of each quarter. Pfizer and Moderna have both adjusted their weekly deliveries several times.

Anand said they would only be in breach of contract if they do not make good on their commitment to deliver a total of six million doses — four million from Pfizer-BioNTech and two million from Moderna — by the end of March.

Premiers pushed Trudeau during their weekly call Thursday to at least let them see the contracts in confidence so they could have a better idea what they guarantee for Canadians, and whether there is actually any certainty about deliveries.

"Saskatchewan is relying on the federal government for a consistent supply of vaccines and a consistent of supply of information," Premier Scott Moe said in a written statement issued Friday. "So far, we are receiving neither."

Canada passed the one-million mark for vaccinations this week, but it was a milestone barely noticed amid the confusion and bickering about dose deliveries.

The United Kingdom has vaccinated more than 15 per cent of its population already, and the U.S. passed 10 per cent.

Canada has given one dose to less than three per cent, and has fully vaccinated with two doses less than one per cent. It vaccinated between 12,800 and almost 19,000 people a day this past week, while the U.S. is vaccinating more than one million people every day.

Moe said he has often learned about delays in shipments from media reports, and that the provinces have been given weekly delivery estimates of Pfizer shipments through the end of February but nothing for March, and nothing for Moderna after this week.

"This means we are left to co-ordinate complex vaccine rollout plans with minimal information that is constantly changing," he said.

During the health committee meeting Friday, Conservative MP Pierre Paul-Hus held up copies of contracts AstraZeneca and Pfizer had signed with the European Union, Israel and the United States. The contracts are redacted and were released with the permission of the companies.

"How is it that I got my hands on these major contracts but here in Canada we can't put our finger on any information," he said in French.

Anand's tone was sharp as she said it would be "imprudent if not illegal" for Canada to release the contracts because all of them contain confidentiality clauses, and breaking those contracts could keep vaccines from being delivered.

"We all want vaccines as soon as possible and I'm not going to do anything to jeopardize that," she said.

Anand said earlier this week she is talking to the companies about the possibility of releasing some of the information contained in the contracts, like other countries have done.

This report by The Canadian Press was first published Feb. 5, 2021.

– with files from Stephanie Taylor.

Note to readers: This is a corrected story. A previous version said Canada would get 20 million doses of COVID-19 vaccine from AstraZeneca before the end of June.