The end of hugs: How COVID-19 has changed daily life a year after Canada's first case

MONTREAL — On January 25th, 2020, Canadians were still living their lives like they always had: commuting to the office, visiting friends, dining out, hugging loved ones, vacationing.
Jan 25, 2021 3:45 PM By: Canadian Press 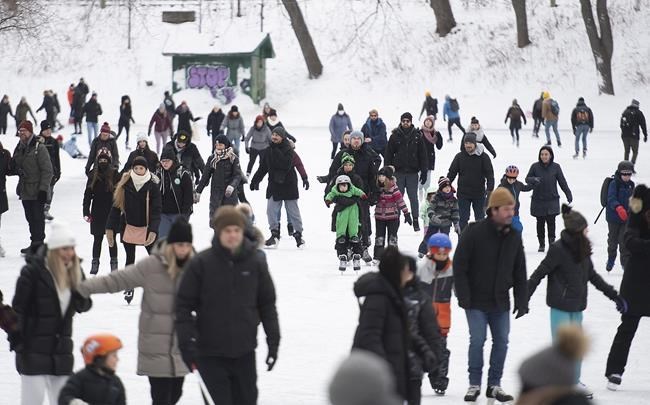 MONTREAL — On January 25th, 2020, Canadians were still living their lives like they always had: commuting to the office, visiting friends, dining out, hugging loved ones, vacationing. But the announcement that day of Canada's first COVID-19 case set in motion a chain of events that would soon change everything.

By March, with cases climbing, health officials began implementing a series of measures that would fundamentally alter how many Canadians live. Lockdowns and calls for physical distancing led to companies shifting to work from home, travel restrictions, mask-wearing rules, cancellation of major events, and video meetings replacing in-person interactions as people were asked to avoid seeing anyone, even loved ones.

Jack Jedwab, the president of the Association for Canadian Studies, says the biggest change to Canadians' daily lives has been the isolation from friends, family and co-workers.

"I think at the root of a lot of that change is these limits on our mobility, which take different forms, whether it's interacting with family and friends, or seeing people that we're accustomed to seeing in our daily lives in person as opposed to on screens," he said.

An online survey conducted for Jedwab's group in September found that over 90 per cent of the 1,500 people polled said COVID-19 had changed their lives, with most citing the inability to see family and friends as the biggest factors.

While few Canadians have been untouched by the pandemic, Jedwab says women, newcomers to Canada and people who were already economically and socially vulnerable appear to have been among the most deeply affected, particularly by job losses.

Here's a look at how COVID-19 has changed daily life for some Canadians of different groups:

For Bill VanGorder, a retired 78-year-old from Halifax, the pandemic put a temporary halt on his active social life and his favourite pastimes of volunteering in the local theatre and music scenes.

"Theatre people, as you may know, are people who love to hug, and not being able to hug in these times probably has been one of the most difficult things," he said in a phone interview.

He considers himself lucky, because at least he and his wife Esther have each other, unlike many of his single friends who are completely isolated. Many older people, who are more at risk of severe complications from COVID-19, are struggling to stay connected with family or finding people to help them with household tasks.

VanGorder, who works with the Canadian Association of Retired Persons, also believes unclear government messaging, particularly on when older adults will get access to the vaccine, is "creating huge anxiety and mistrust in the system," among already-nervous seniors.

But while the pandemic has been hard, he says there have also been silver linings. He and many of his friends have been learning to use platforms such as Zoom and FaceTime, which help seniors stay in touch with relatives and connect with their communities.

"We think the positive thing is that, of course, this knowledge will continue after COVID and will be a real step forward, so that older adults can feel more involved in everything that's going on around them," he said.

The first thing he'll do when things get back to normal is to hug his grandchildren and theatre friends, he said.

As classes have moved online, many students have had to adapt to living and studying in small spaces and being isolated from friends and campus life at a stage when forging lifelong friendships and social networks can be crucial.

Small living quarters, the inability to travel home, financial fears and uncertainties about the job market have contributed to a "greater sense of isolation" for many students, according to Bryn de Chastelain, an Ontario resident studying at St. Mary's University in Halifax and the chair of the Canadian Alliance of Student Associations.

While he believes schools have done their best to support students, de Chastelain says many students have seen their mental health suffer.

"A number of students are really struggling with having to learn from home and learn online, and I think that a number of strategies that students are used to taking up are very difficult to replicate in the online environment," he said.

Schools across the country were shut down for several months in the spring, ushering in a challenging time for parents who were suddenly forced to juggle full-time child care, work and keeping their families safe.

The reopening of schools in the fall brought different challenges depending on each province's COVID-19 situation and approach. In Ontario, some parents opted for full-time online learning, while others were forced into it when Premier Doug Ford chose to extend the winter break. In Quebec, which doesn't allow a remote option for most students, some reluctant parents had no choice but to send their children back to class.

"I think uncertainty, not only for kids but for everything -- work, life relationships and everything -- that has certainly been the theme of COVID," said Doug Liberman, a Montreal-area father of two.

Liberman said the biggest challenge has been trying to balance the health and safety of his family with keeping his food manufacturing business going and maintaining a sense of normalcy for his two girls, ages 10 and 12.

For his family, that has meant trying to spend time outside but also accepting more screen time, and ultimately, taking things day-by-day.

"I certainly think that we certainly don't have the answer, and I think we've done as best as we could, like everybody else has," he said.

This report by The Canadian Press was first published Jan. 21, 2020