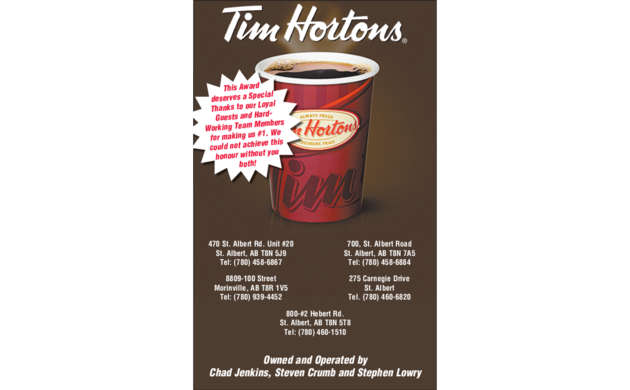 In the summer of 1983, Joan and Art Jenkins opened their first Tim Hortons in St. Albert, Alberta. After moving from Hamilton, Ontario, where Tim Hortons was a virtual household name, they were excited and unsure of the future. Children in tow, everyone pitched in to try and make things work. It was not easy. Long hours, late days, an unknown brand and a small location in a tiny plaza on St. Albert Trail, gave everyone pause to wonder if this business would endure for the future. Many times, people would call and ask to speak to "Tim". My father would spend a minute explaining his position as a Franchised Owner. And have a chuckle after hanging up the phone. My Mom baked and did the bookkeeping. My Dad unloaded supply trucks and performed repairs while he made the schedules. They hired people. They cleaned. And made a life for themselves as the years went on.

In 1990, they were joined by their son, Chad, who had since gone away to school and have a family. As Customer demand grew, so did the needs of the business. By this point, one location became 2. 2 become 3. 3 became 5. 5 became 7. We had stores in St. Albert and Edmonton and Morinville. Between new products, new equipment, renovations, donations, a robust provincial economy, local events & festivals, sports programs, hiring shortages, the foreign worker program, new federal & provincial governments, times were certainly exciting. Chad took on more and more responsibility as time went on. His sister, Justine, helped Joan with the books for a number of years. His wife, Gidget, daughters Zoe and Maia worked on and off in the stores between school commitments, Zoe's activities and Maia's hockey. Baby Christopher was also growing up. Brother-in-Law Steven Crumb, had joined the business, too.

Time marched on. Joan and Art had been at it for a long time. Along the way, the family had supported so many community events. Hockey, Soccer, Football, Lacrosse, Charities, the Children's Festival, Family Events, Antique Car Fundraisers, Golf Tournaments, Air Shows, Food Drives, School Events, Camp Day, Smile Cookie, Free Family Skates, Special Olympics, and the Terry Fox Run. There is more.

The time had come for Joan and Art to retire. Chad had been leading the day-to-day for a number of years. The business was undergoing upheaval. It needed to be transformed-as if the years leading to this point wasn't enough. Another Brother-in-Law, Stephen Lowry, had joined the business, too. Chad's son, Christopher works at one of the Stores. We centered our efforts to St. Albert and Morinville, leaving 2 locations in Edmonton for others. Joan and Art stepped away in the earlier 2010s. They remain connected through family and provide guidance and mentorship when needed. When they aren't relaxing in Arizona for about 5 months of the year.

With 5 locations and a solid Management group across 5 stores, Chad, Steven and Stephen (& GM Annie), keep busy ensuring things go smoothly-for the most part. We all have our own areas of expertise and strength. As we move along through the 21st Century, the business has always been and continues to be a family business.