A different Don Juan Comes Back from the War 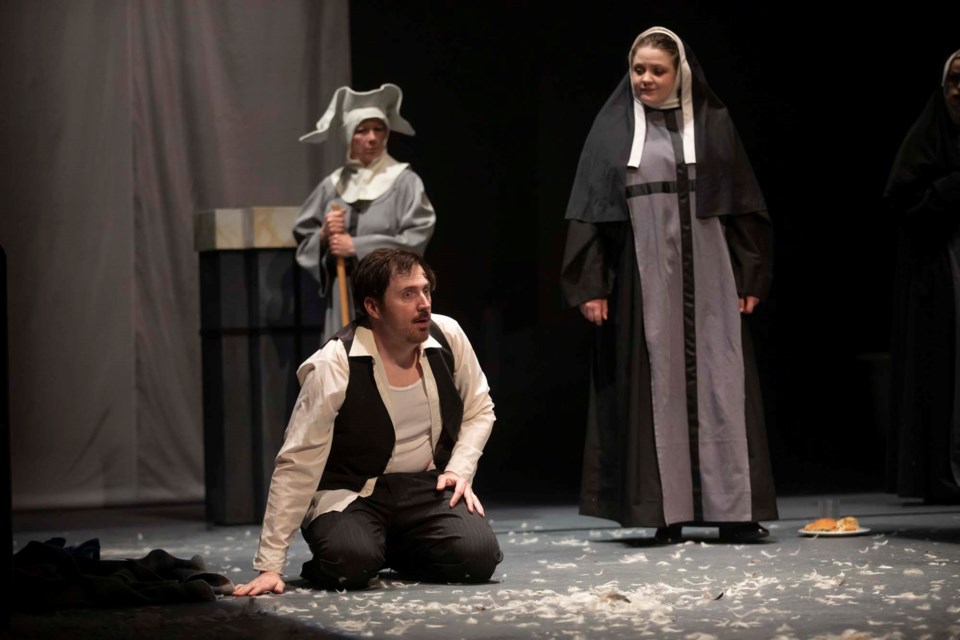 Garett Ross, Rowe Anne Rivet and Morgan Donald share a taut exchange during the Studio Theatre streaming production of Don Juan Comes Back from the War on March 26 to 28. LAUGHING DOG PHOTOGRAPHY/Photo

As cultural institutions across the world have pivoted to online productions these past 12 months, the University of Alberta’s Studio Theatre has jumped into the queue with its first virtual production.

Don Juan Comes Back from the War offers a fresh and incredibly prescient 21st century interpretation of the legendary, fictional libertine who devoted his life to seducing women. This Canadian premiere, originally written in 1936, will be streamed March 26 to 28.

Set in Berlin at the end of World War I, the city has changed drastically. It is crumbling through a massive political, social and economic upheaval that threatens to engulf survivors. It is 1918. The Spanish Flu is also running rampant and facism is on the rise.

In a nutshell, Don Juan – a solider who has come through the trench warfare without a scratch as an acclaimed hero – has begun to question his taste for debauchery and seeks to find the one woman he loved and jilted.

DeFelice, one of Edmonton’s finest directors, has always leaned toward layered scripts with big ideas and smart crackling dialogue. And MacMillan fits the bill.

“MacMillan is one of my favourite playwrights. He writes about huge political-social ideas, but on a human scale,” said DeFelice, who selected the Don Juan script in the spring of 2019, one full year before COVID-19's onslaught.

Once the pandemic hit, DeFelice was shocked at how much the script aligned with current behaviour and emotions.

“We were all so incredibly innocent. We were like Don Juan. We were in denial about a lot of things in the world. And I couldn’t believe how much of it is so apt for today. I was shocked at how close we are to it today. And I realized how important the stories are that we pick to present.”

The play examines the myth of Don Juan, the great lover. At one point, he falls in love and wants to marry. But the idea of being with only one woman gives him cold feet. He jilts her and joins the war. After living through four years of bloody conflict, Don Juan realizes he was wrong and returns to make amends. During the journey, he discovers his house was burned and people he knew scattered.

The play is cast for six women and one man. Garett Ross, one of Edmonton’s most sought-after actors, is cast as Don Juan seeking redemption.

“Garett is brilliant. He moves so beautifully on stage, and he has a roguish, playful quality. He has a special charm, but he can always play emotional vulnerabilities. There is so much pain, grief and darkness, you want someone who brings joy to the room."

“I’m really interested in the way we live, in the structures of the world and the way we’ve ordered society. Is there a better way of taking care of vulnerable people? How do we create a better place where the world won’t fall apart? How do we take care of each other? I wish everyone could have a drink and talk to their friends about this play. It’s a huge emotional ride. Be prepared for an epic journey. It’s a huge theatrical piece.”

Ticket prices are students $5 and adult/seniors $10. Purchase tickets through the Timms Box Office at 780-492-2495 or via email at [email protected].