A musical salute to seniors 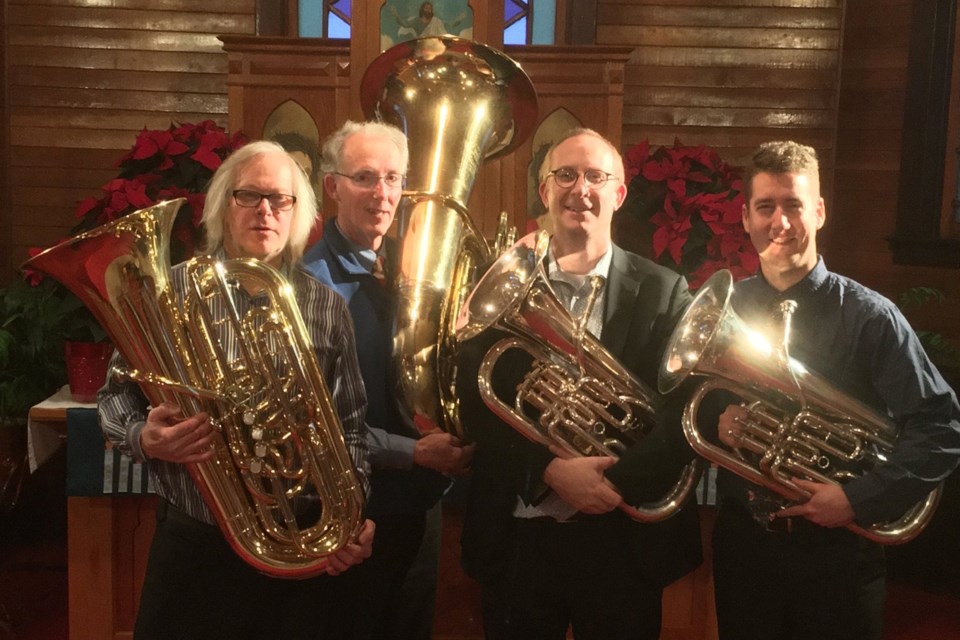 Even as festivals and events have been cancelled to rein in COVID-19, musicians have engineered creative solutions to continue sharing their love of playing.

The newly formed Tubas of St. Albert perform two pop-up tributes today, Aug. 21, for a couple of long-time local seniors whose passion for music is hard to beat.

The first salute is for David Otto, 88, the former Principal Tuba for Edmonton Symphony Orchestra. The concert takes place at 2:15 p.m. outside his home at River Ridge Retirement Residence.

Otto is dealing with dementia and due to quarantine is in isolation. Michael Eastep is the driving force behind Tubas of St. Albert and former Principal Tuba in the Calgary Philharmonic. As a musical colleague, Eastep recognizes Otto's need to be enveloped in music and this is a safe way to bring joy to many residents.

After Otto’s retirement from the ESO in 1981, he joined the St. Albert Community Concert Band enjoying an equally long and storied career.

“We first met at a workshop in Saskatchewan about 35 years ago,” said Eastep, but did not cross paths with Otto until the Calgary musician moved to St. Albert in 2019 and joined the St. Albert Community Band.

“Dave continued to play well after ending his professional career with Edmonton Symphony Orchestra, and became a beloved player at the local level including St. Albert Community Band. He had dementia but everyone was amazed at how well he played by ear and with a well-conditioned reflex. I keep hearing stories about how much he loves music and playing with colleagues.”

Tubas of St. Albert will play a 45-minute concert of classical music with a smattering of classic rock.

“We’ll have some Beatles and Simon and Garfunkel, and Mancini’s Pink Panther. And you can’t have a tuba concert without a (John Philip) Sousa march.”

In addition to Eastep, and euphonium players Chris Diaper and Julien Simard as the Tubas of St. Albert, guest percussionist/drummer Brian Thurgood joins the quartet for a one-off performance.

The musicians play outdoors for residents, however due to COVID restrictions, this concert is closed to the public.

The Tubas minus Thurgood regroups later this afternoon to perform a driveway concert in honour of Maria Strakowicz, 92, a resident living in the  Lacombe Park area. Born in Italy, Strakowicz married a Polish soldier from the Second World War. The couple traveled the world and for a time lived in the Argentina during the presidency of Juan Perón before making Alberta their home.

Despite Strakowicz’s age, COVID restrictions and some reduced mobility, she continues to display great community spirit with a broad social network, said Eastep, who is her next door neighbour.

“She’s been the best friend we’ve had since we’ve moved in. It’s hard moving to a new location, especially if you’re not a youngster. We moved here last fall and then COVID happened and we had limited exchanges with our neighbours. We got to know her, and once we did, it opened up a world of possibilities."

Strakowicz had developed a passion for lyrical music from her father who was employed at an opera house.

“She got to know all the operas and sings them all the time.”

The Tubas have selected a repertoire that speaks to Strakowicz’s passion for opera. It includes an arrangement from Verdi’s prelude to La Traviata as well as La Donna è Mobile from Rigoletto.

“This is an opportunity for people in the neighbourhood to come and say hello.”

The driveway concert starts at 5 p.m. at 28 Leon Place.

“We think the sound of the tuba has a pleasant quality and we hope to share the joy we have in playing. As far as seniors go, we are anxious to help the senior population reintegrate into general society.”