A panel of 'Glass' 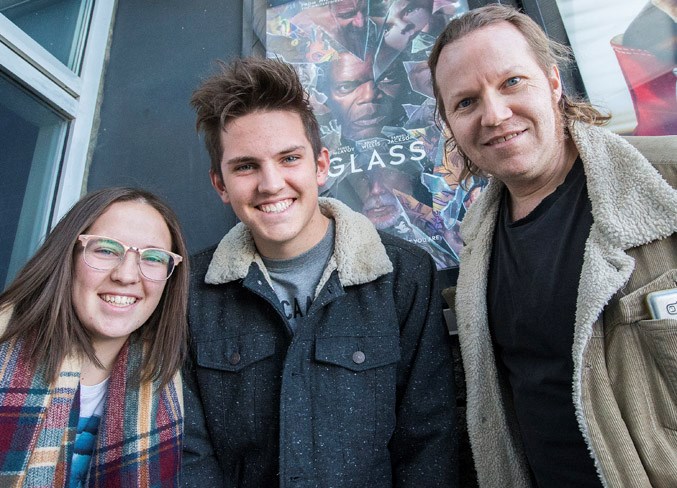 M. Night Shyamalan … his films have been equally revered and reviled, plauded and panned. For every The Sixth Sense, there has been The Happening. You could almost match up his entire career in that way: Signs against The Last Airbender, The Village against After Earth, and so on. Incidentally, The Village was the first movie that this movie critic ever gave a 5 star review to.

I deeply admire his filmmaking sensibilities that to me are so reminiscent of classic Hitchcock. The stories often take their sweet time to really pay off for their viewers. He knows how to build up suspense and atmosphere, maintaining high interest and energy in a film despite a languorous pace. Often the best parts don’t appear fully on screen, intelligently downplaying the special effects and leaving things up to the viewer’s imagination. And yes, he does like his twist endings.

He has yet to win any Oscars or major awards, but he sure does get audiences talking. OK, he has won two Razzies. Still, I stand by his storytelling abilities.

With his newest film, Glass, he is not only revisiting two of his most popular features but also tying them together and capping them off as part of what he calls the Eastrail 177 Trilogy, a unique, auteur-based superhero universe with highly psychological storylines with multiple characters who have suffered severe traumas in their childhoods. Released in 2000, Unbreakable featured Bruce Willis as David Dunn, a man who is the only survivor of a disastrous train crash. From that, he comes to meet Elijah Price (Samuel L. Jackson) who was born with a disease that causes his bones to be extremely fragile. That movie played heavily on comic book mythologies and again earned the writer/director much praise.

Then Split (2017) came to theatres with James McAvoy as a man named Kevin Crumb. His dissociative identity disorder means he has 24 distinct personalities that are collectively referred to as The Horde. He kidnaps young women to be victims for the unhumanly strong personality called The Beast. One of these is Casey Cooke (Anya Taylor-Joy) who escapes captivity, though Crumb eludes capture. It was only at the end of that movie that Bruce Willis reprised his earlier character for a cameo appearance to hint at the shared universe and at a future showdown movie, this one, which was just released last Friday.

Glass is ostensibly about the three facing a psychiatrist, Dr. Ellie Staple (Sarah Paulson), who wants to treat them for their delusions of grandeur. Despite his co-stars’ higher marquee placing, McAvoy steals the show, exercising even more of his acting talents by playing up to 20 distinct characters, often switching between them rapidly in the same scene.

I brought along with me Jade and Dace Deputan, two St. Albert siblings who love movies so much they started up their own movie review blog last year, which can be found at modernmovies.wixsite.com/reviews. After the show, we sat down to pick apart what worked and what didn’t. The following is a spoiler-free and heavily redacted excerpt of that conversation.

Jade Deputan: I didn’t hate it, but I didn’t love it. It's just kind of average for me. I think it was mostly to do with the ending. I think it was almost contradictory to what that whole universe he’s trying to make is and it didn't sit right with me.

Scott Hayes: I kind of see where you’re coming from, where he was building this up as the start of a superhero universe all to his own, so you’re expecting the bad guys to get badder and the good guys to get gooder. It doesn’t quite work out that way.

Dace Deputan: I did like it more. I get what you’re saying. I wasn’t a huge fan of the ending either. I like the fact that it actually closed off the trilogy and not opened it up to more of this universe. I think it was good for it to just stay with three solid movies.

SH: I’m with you both on this. I knew there had to be more at the ending. Throughout the movie, I was looking for the hints of what was still to come.

JD: It never ends with M. Night Shyamalan. If you think it’s over, there’s always just a little bit more. I think that’s also why it kind of takes it out of the experience of watching one of his films because you’re just waiting for the twist to happen. Instead of just enjoying that moment or the one scene or anything, you’re just looking for more.

SH: It was a little more intense than I was expecting it to be. I don’t really know what I was expecting except that it’s the good guys versus the bad guys and they’re all together in the same room.

DD: I didn’t think it was unsatisfying necessarily. It was cheesy, but I thought how it actually ended the trilogy if this is the last movie, which it might not be. I didn’t need that big fight [scene]. I thought that might have been even more cheesy than what already happened. To me, it was fine.

SH: M. Night always has a twist and it’s not going to be what you expected.

JD: I think I would go 2.5 or 3 stars just because it just wasn’t satisfying. It wasn’t the ending that I would have hoped for the franchise. Just the fact that these superheroes could be anybody and he says in the movie that this is not a comic book, this is real life, but it almost turns itself on that.

SH: It kind of crumbles not to use the glass analogy.

DD: We keep talking about the ending and yeah, that might have been a bit lacklustre, but I think the first three-quarters were where this movie really shined. Like I think you can probably agree that’s the best part.

JD: It was good, but I don’t think it was good enough to redeem the ending.

SH: Would you recommend it to your friends?

DD: Only if you’re a fan of the first two or even seen the first two. I obviously wouldn’t recommend this to someone who didn’t like Unbreakable or didn’t see either of them.

SH: It’s an intense movie with a lot of psychological aspects. It starts off with The Beast and he’s got four cheerleaders tied up. That’s a big trigger warning for a lot of people.

JD: Pretty heavy. I used to not be very good with horrors. I’ve since gotten better and still it was kind of creepy.

SH: Would you still classify this as a horror?

JD: I think it’s got more of a thriller aspect. It doesn’t have so much of the ‘jump out and scare you’ thing, but it’s more that you think about it. There’s the one-note violin.

DD: I think that’s a good thing about M. Night. He blends genres really well. This is a thriller to a drama. It’s got mystery in it. I think it all works together.

SH: I would still call it better than his worst movies, but not like they’re up at the top. This is somewhere maybe just above the middle to me.

JD: I think that with the ending being the last shot you see, it’s easy to hold on to that and remember that that wasn’t very good and forget about a lot of the things that were good about it.