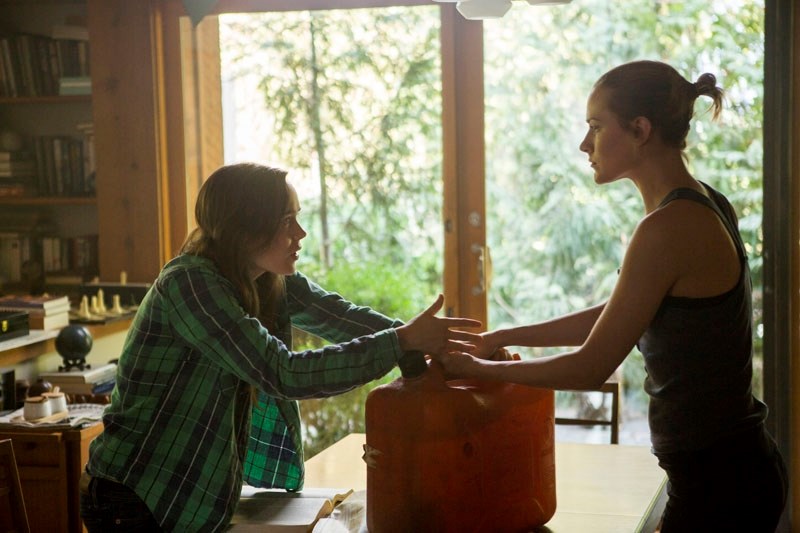 Ellen Page and Evan Rachel Wood play sisters Nell and Eva in the post-apocalyptic drama Into the Forest. Together

You probably also don’t think of women as the main characters.

This dystopian film features the quiet introspective drama of two sisters living in a secluded cabin. With a deft hand, Canadian director Patricia Rozema is here to change all that, as she finally brings Jean Hegland’s novel Into the Forest to cinemas. It’s a wonderful, sensitive and small movie but its internal dramas are very large. If you haven’t yet made the colossal mistake of making your movie night out to witness the latest blockbuster spectacle (like X-Men: Apocalypse or Teenage Mutant Ninja Turtles: Apocalypse – or whatever it’s called) then surprise yourself and your date by watching something that is actually worthwhile and memorable.

“I’m really committed to doing films that I would love because once you break away from that, you’ve just lost your rudder and you won’t know what’s good any more. I feel like having it very grounded even though it’s speculative fiction – to use the term ‘near-fi’ meaning it’s sci-fi but very near – it still seemed very possible to me,” Rozema confided during a phone interview.

In this movie, the power goes out across the entire continent, simple as that. People haven’t really thought about how dependent they’ve become on electricity that you can access simply by plugging something into a wall. Without power, anarchy reigns.

For Nell (Ellen Page) and Eva (Evan Rachel Wood), it means that their family unit needs to power up in a big way. Initially, their dad Robert (Callum Keith Rennie) shows them the basics of survival, teaching them the importance of conservation and such, but eventually it comes down to the two young sisters to figure things out for themselves. They are forced to fend for themselves and fight off the elements of destruction.

Like I said, it’s a small movie but a powerful one that resonates and delights all around, not just for its treatment of two very real characters and how their relationship develops over a period of time during a troubling situation. It is also a marvelous story for demonstrating how a person’s instincts, fed by years of having a solid and stable parent figure, can lead them to make strong but difficult choices.

More than anything else, Into the Forest is as real a post-apocalyptic drama as you could get. There aren’t spaceships and aliens and robots fighting with lasers. There are people simply trying to make sure that they have a roof over their heads, food on the table, and the support and strength of their family to carry them through the days.

“That was a real draw for me, to do something that wasn’t fantasy,” Rozema continued.

“I actually think that talking about the end of the world and then bringing in the zombies and the meteorites and the dinosaurs come back to life, as much as those can be fun it’s comforting to consider to the end of civilization as we know it and then blame fantastical elements because it would just seem like a pure flight of fantasy. I don’t have to be fearful or worried or prepare or think about how I’m treating the earth right now because it’s never going to happen. This is actually more frightening and more of a thriller because it could happen this way.”

How beautiful it is to watch too, even when the sisters are forced to face dangers far greater than not being able to turn the stereo on. This family sticks together through thick and thin. Watching Into the Forest is perhaps the most important movie you could – and should – watch with your family this weekend, instead of something truly fantastic like anthropomorphic turtles with ninja skills. Into the Forest is far more memorable than such drivel.

“Films that have residual value (that actually linger for you and affect how you think and feel afterward) are rare. I think that what is happening in society but what would happen even more if all the power was gone is we would cocoon. We would just retreat to our places especially if you had water and heat and some food and safety. You would just stay and then what would happen?”