A traveller’s strange encounters with UFOs 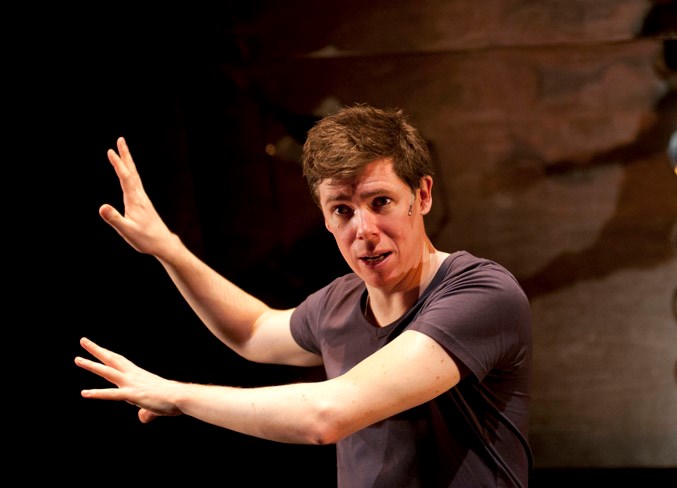 Actor Damien Atkins takes us through his personal odyssey into the world of UFOs in We Are Not Alone, running at Theatre Network until March 3.

We Are Not Alone

Crow’s Theatre, Segal Centre for Performing Arts and 2b Theatre

At the start of We Are Not Alone, Theatre Network’s stage is near pitch black. A single vertical upside down cone of light is focused on the floor. It’s an eerie, but simple effect that evokes images of UFOs hovering in a dark sky.

Playwright and performer Damien Atkins started his exploration into unidentified flying objects nearly eight years ago and candidly admits he’s not sure why he was drawn to the subject matter.

But in this 90-minute personal experiential chase that covers historical facts, statistics and famous quotes as well as puzzling accounts, wacky individuals and a few terrifying narratives, he appears to want to believe in extraterrestrial tourists.

Although extremely well researched, the production is far from being a series of dry accounts from historical archives. Atkins weaves the recorded history into a stream of conversations he had with individuals curious about his project. In the retelling he accomplishes a tour-de-force performance.

The Toronto-based actor, a recipient of multiple Dora Mavor Moore Awards, divides the script into three parts. He begins by detailing the history of sightings with Kenneth Arnold, a 1947 pilot whose account of seeing and clocking a UFO set off a media frenzy and a flurry of eyewitness testimonies across the United States.

Another fascinating account Atkins speaks about is the riveting Project Blue Book, a series of studies of UFOs conducted by the United States Air Force. It was commissioned in 1952 and by its end in 1968, it had collected more than 12,500 recorded reports.

In the second part, the slim actor visits the International UFO Congress in Phoenix, Ariz., to meet and interview speakers, believers, abductees, conspiracy theorists and experiencers (people with visits from aliens).

One of the funniest scenes is with a bald, new age hippie who shares a telepathic link with sasquatches living in another dimension that travel through portals.

One of the saddest experiencers reveals how she was visited as a teenager on numerous occasions and later gave birth to two human-alien hybrid children that died.

Perhaps the most terrifying and powerful story is of John, a man who is hypnotized and undergoes regression therapy. He recalls being taken into a craft unable to move a muscle while strange beings implant painful devices.

Throughout these interviews and observational moments, Atkins as himself becomes progressively more panicked and hesitant to proceed. He also takes on the role of co-director Christian Barry, who encourages him along the way and in comparison is fairly even-keeled and chirpy.

It is in this section that Atkins delivers truly masterful performances as he flits from character to character with lightning speed. With just a shift in body stance and a slight alteration in voice, he presents 40 different characters. Remarkably, no two are alike.

The third section ties everything together as Atkins and his director travel to Sedona, Ariz., a city famed for its red sandstone formations. Frustrated with the convention and the weirdos he meets, the playwright is skeptical about visiting the desert city. However, his guides, an arresting couple, assist him in finding a life-altering experience through a moment of self-reflection.

Strange crop circles. Anti-gravity craft. Roswell and other legendary sites are all part of this narrative that engrosses both believers and skeptics.

It is almost impossible to either certify or negate extraterrestrial life. However the universe as we know presents limitless possibilities.

Atkins deals with the heavy matter in a light, playful way, never judging and leaving each segment open to examination. Through his masterful interpretations, he introduces credible witnesses as well as many weirdos, each with their own singular charm.

Trying to sift through the accounts is not always easy or satisfactory, but We Are Not Alone serves to present UFOs as real phenomena that affect people in myriad and mysterious ways.