What does it take to make an impact on others or even the world? That’s the question being posed by three artists who have come from other provinces to form one exhibit at the Art Gallery of St. Albert.
Dec 9, 2017 12:01 AM By: Scott Hayes 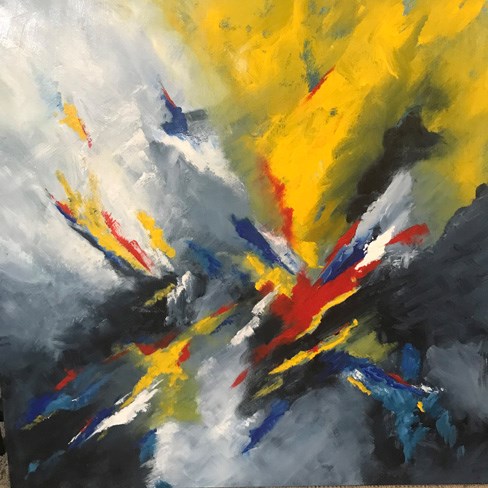 What does it take to make an impact on others or even the world? That’s the question being posed by three artists who have come from other provinces to form one exhibit at the Art Gallery of St. Albert. The answer, seemingly, is to start by getting out of your own head. Outrospectives forces you to think beyond yourself, or at least opposite to your introspectiveness. Gallery director and curator Jenny Willson-McGrath explained it’s the process of looking outside, trying to learn from what we see. Photographers and printmakers Edwin Janzen, Nathalie Daoust, and Florin Hategan tackle the subject in different ways. Janzen, to start, has a series of manipulated photographs of manipulated souvenir objects such as a collector’s spoon featuring an old image of the petrochemical plants on Refinery Row in the east of Edmonton. Such a gritty area gets a high gloss feel to it through his work. “He’s trolled through thrift stores … and he takes very, very high res images of the crests on these spoons. He chops the spoon part off to create this interesting crest with these obscure images.” Without knowing the background, such an object appears to be a very important, possibly regal silver badge. Contrast that with the work of Daoust, the Montreal-raised artist who claims on her website to have a “childlike contempt for reality” yet a “a passion for intimacy.” Her Korean Dreams series dives into the mysterious realm of North Korea, with its secretive society and its sheltered peoples. Apt to its subject matter, her photographs – surreptitiously obtained and obsessively developed – are grainy, foggy, and leave much of the detail to the imagination. Dreamy, Willson-McGrath calls them. “It plays on concepts of reality and fantasy. She took one of these state tours of North Korea … and was given a censored view of the country. The pictures are making a statement on how these people are living within a highly oppressive regime and how almost every aspect of your life is tightly controlled. There’s a lot of disinformation.” Rounding out the trio is Hategan who also has a penchant for the graphic arts. His oeuvre is inspired by the deep emotional experiences of his personal life and explorations. How deep? Well, his lino cuts are larger than life-sized. Willson-McGrath points out how absolutely enormous and imposing they are. His series here explores the people affected by boom-bust cycles of an industrial town. “We’ve selected the portraits of teenagers that are left behind growing up in these economically-struggling towns. They’re really, really cool. There’s definitely a dourness and a melancholy to them, this collision between the old and new in the way that we communicate. It’s the malaise of the contemporary world and how that’s changing the conversation in society.” The exhibit runs until Sat., Jan. 27. Today, however, people can catch it during its first week with an opening reception this afternoon from 2:30 to 5 p.m. The Art Gallery of St. Albert has temporarily relocated to #100, 6D Perron St. while the gallery building is being renovated. Call 780-460-4310 or visit www.artgalleryofstalbert.ca for more information. VASA marks the calendar for its members If it’s December then that means that the annual Members’ Show and Sale must be on at the Visual Arts Studio Association. That’s no small order, what with the artists’ collective’s roster of 130-plus names. The show and sale offers a fine opportunity to get a great overview of the artists and the work that they’re producing. It also fits in nicely with many people’s holiday shopping plans. The show actually runs until Sat., Jan. 27. VASA is located at 25 Sir Winston Churchill Ave. Call 780-460-5990 or visit www.vasa-art.com for more information.