Altar Boyz funks it up for the Lord 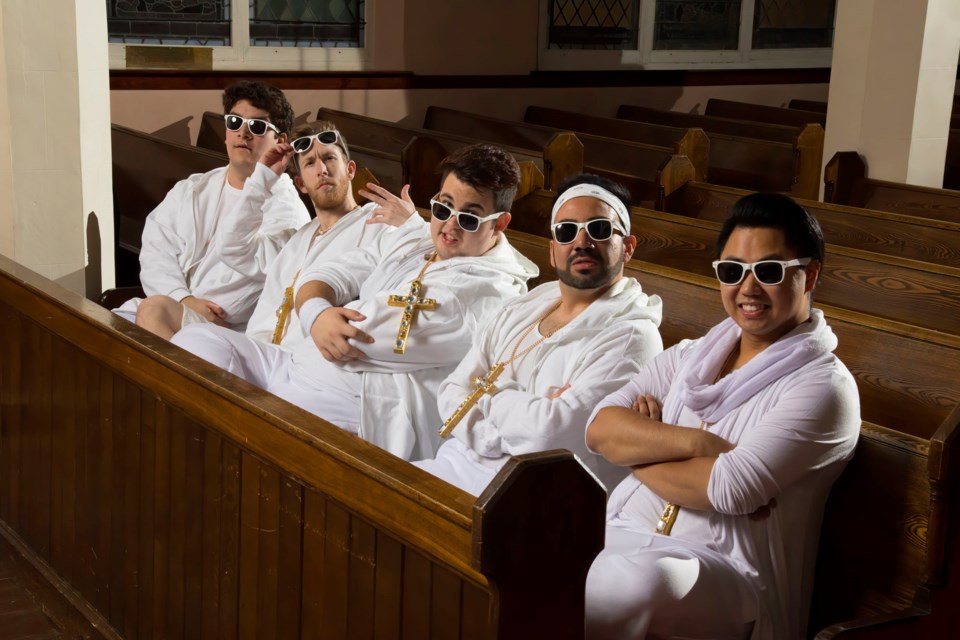 Altar Boyz is a lighthearted musical comedy about a fictitious Christian boy-band on the last night of their national “Raise the Praise” tour.

The premise of the Ohio-based boy band’s tour is to satirize the popularity of Christian pop-rock as well the boy band culture epitomized by Backstreet Boys, N-Sync and New Kids on the Block.

Taking place in real time, the five-member group showcases the musical preachiness of Matthew, Mark, Luke and Juan named after the four biblical authors of the four gospels. The fifth is Abraham, the group’s token Jewish member and odd man out.

As each song is sung, we learn how the boy-band was founded, and each of the members’ stories as well as the one secret they keep from each other.

Tonight, they are on a mission to soothe the souls of the suffering in the audience. On stage is a Soul Sensor DX-12, a Sony screen that displays the number of souls needing a dose of salvation.

Altar Boyz is definitely a spoof. However, it is less about making fun of religion than the way the five young singers express their spiritual faith. In fact, much of the show’s humour stems from their enthusiasm and naiveté.

Gary Adler and Michael Patrick Walker’s upbeat score is catchy, and the songs for the most part are sung quite well. A live four-man band conducted by pianist Sally Hunt adds a lustrous boy-band vibe.

Director Gregory Caswell’s cast is quite charming. As Matthew, the Boyz’s founder and praise leader, Darian Ames is endearing and very much the wholesome boy next door. He also appears completely unaware of Mark’s not-so-secret crush.

For his part, Renell Doneza as the closeted gay member is the cute scene-stealing Mark who struts across the stage flipping on a dime between a diva and sensitive soul.

Anthony Hurst as the break-dancing Luke and not-so-bright van driver is fresh from rehab after a bout of “exhaustion.” Despite a doofus-like quality, Luke gives an athletic performance and turns up the temperature with a walking handstand, the wave and a few cartwheels.

Speaking in a thick Latin accent, Lidinei Harnum as Juan takes us through his tragic orphaned life while David Anderson as the sweet and loyal Abraham provides some of the most uplifting moments in the production.

The high-energy fivesome sing powerful tunes such as Rhythm in Me, La Vida Eterna and I Believe. While the actor-singers put on an enjoyable theatrical concert, Kevin Del Aguila’s script attempts to satirize too many targets.

He scratches the surface of religious zealotry, product placement, the dangers of celebrity and the obsession with “origins.” Unfortunately they are sporadic and never reach fruition.

While the plot is short on depth, the music is a lot of fun and may save your soul.