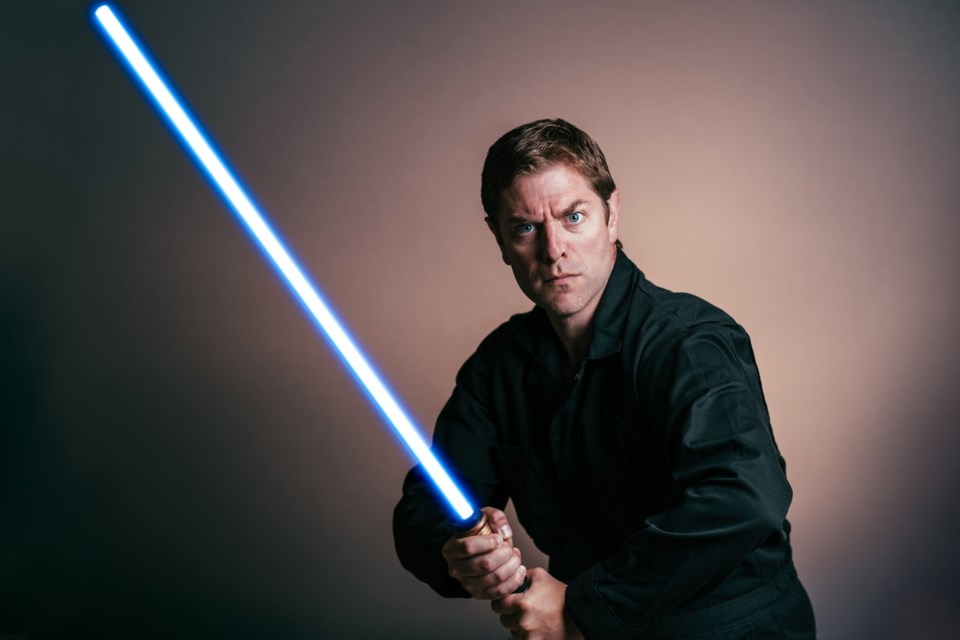 Charlie Ross brings back his frenetic and funny solo show, One-Man Stars War, to the Arden Theatre on Nov. 22.

Due to new COVID-19 restrictions imposed by Alberta Health Services on Thursday, Nov. 12, the Arden Theatre is postponing One-Man Pride and Prejudice as well as One-Man Star Wars until 2021.

No new dates have been scheduled yet. Patrons can obtain ticket refund information by calling 780-459-1542.

As a theatre actor, Charlie Ross enjoys several advantages over others during this widespread pandemic. First, he’s a solo actor requiring no social distancing on stage. Second, he’s performed to stand-up ovations for more than 20 years. Third, his shows draw on laughter and amazement – something everyone thirsts for.

Although his name may not be immediately recognizable, his solo pop-culture shows, One-Man Stars War and One-Man Lord of the Rings, are big draws across North America. Anyone who has seen his 70-minute shows will probably spend part of the time trying to figure out where he taps the energy and stamina for his performances.

The Victoria, B.C., resident is a favourite at the Edmonton Fringe Festival and he returns to the Arden Theatre on Sunday, Nov. 22, with two shows. One-Man Pride and Prejudice is his matinee performance at 2:30 p.m. while the acclaimed One-Man Star Wars Trilogy takes the form of the evening show at 7:30 p.m.

“It’s amazing to see how theatres in Alberta have networked to reopen. I haven’t seen this in other provinces – B.C. claims to be more artsy yet you see most theatres still closed. But you see arts organizations in Alberta are more co-operative. It’s a lifeline for actors,” Ross said.

He plays all the major characters and provides all the sound effects and music. There are no canned special effect noises or music, just some clever lighting effects balancing Ross’ onstage talent and wit. And yes, there’s a lot of improvised patter depending on audience reaction.

Despite his amazing talent, it’s been extraordinarily difficult to book a gig since COVID struck North America and borders were partially closed in March.

“This is a hard job going into this in the first place. The stage has many hurdles you have to integrate into. It’s a profession that is hard to start with, but we are now being tested to the absolute limits,” said Ross.

“There are all these amazing facilities across North America and you can’t go in them or fill them up. You have all these fantastic productions champing at the bit and they can’t go. I feel there’ll be a tidal wave if some day, some magic day we can go back to where we were.”

Ross’ first foray into the one-man shows started with his interpretation of Star Wars followed by Lord of the Rings.

“I grew up watching Star Wars, and as for Lord of the Rings, I read it when I was a kid. I was already a lover of it.”

Both these great stories had a masculine vibe and the versatile actor wanted to balance the scales by next producing a show detailing the feminine point of view.

Defying expectations from his previous pop culture successes, Ross happened to catch BBC’s 1995 six-part series of Pride and Prejudice starring Jennifer Ehle and Colin Firth. The six-part series broadcast the love story between the impoverished Elizabeth Bennett and Mr. Darcy, a member of the gentry who owns an immense estate.

“I watched it and it was the ultimate series.”

He had discovered a vehicle for a story of love and romance in a repressed society.

His wife acted as a sounding board and together they reduced the story to its essence.

“Even when I’m telling it, It’s Lizzy’s story.”

For Ross, Pride and Prejudice is as much a place of exploration and discovery as Star Wars.

“If you like Star Wars, you’ll like this. If you like the original Pride and Prejudice, this is the show for you. It’s a funny retelling of the story you already love.”