Bellerose high school art teacher Lindsay Bracken has been secretly putting together a charity drive over the last few school years.
0
Jun 21, 2017 12:00 AM By: Scott Hayes 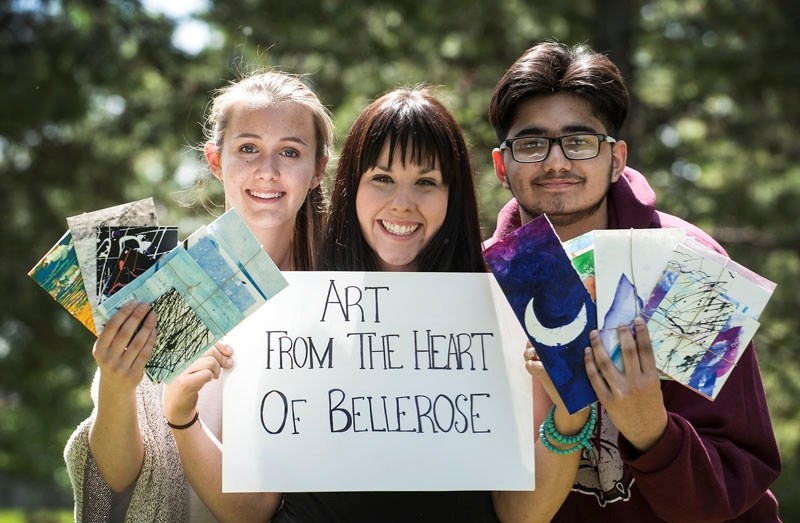 Bellerose high school art teacher Lindsay Bracken has been secretly putting together a charity drive over the last few school years. It utilizes the collective efforts of her grade 10 to 12 students who produced some abstract art cards that are ready to be sold, for what Bracken calls Art from the Heart of Bellerose.

"It's children supporting children," she said. "I've just been stashing all the work away for years. Now, I probably have about 1,000 of them. The cards are beautiful. It's pretty powerful."

Along with a few of her students, she has packaged the cards in bundles of six with each bundle selling for $5. All of the proceeds are set to go to the Stollery Children's Hospital Foundation.

"The funds raised will be used to advance children's health care at the Stollery, giving the sickest kids, anywhere in the world, the best chance to live a long and healthy life. Their fundraiser will support the best equipment and facilities, programs, training and research to keep the Stollery world-class in delivering specialized children's health care," said Tannis Peterkin, youth philanthropy co-ordinator at the foundation.

Bracken is hoping to find places to sell the cards since school is almost over for the year but she expects that the 2017/18 school year will be the project's big debut. People can find them at the school's major events including next year's Bike-a-thon and Open House.

Engines revved for Racing for a Cure

Kingswood Boulevard was a scene of some incredible rides on Saturday, as Rick Murti hosted a pre-charity race meet up for numerous drivers of some exotic and super cars. The event: Racing for a Cure, set to take place this coming Saturday.

"It's a pretty epic event," Murti said of the unique ride along where the vehicles are valued between $200,000 and $3.4 million each.

He said that there would be quite a few Lamborghinis, Rolls Royce, Ferrari, Alfa Romeo – "it's a new 4C… it's a pretty hot looking car," he noted – as well as Mercedes, an Audi R8, and a Corvette, among others.

For his wheels, Murti drives a McLaren 570S and a Jaguar S-Type R.

As for the event, people can come out and pay $50 for a ride around a closed course in downtown Edmonton. Over the last five years, the event has raised nearly $1.75 million for local children's charities. This year, proceeds will go to the Kids with Cancer Society.

The Sturgeon Hospital Auxiliary Volunteer Association (SHAVA) made its annual donation to the hospital on Monday evening, and the cheque brought its cumulative contributions over the $3 million mark.

SHAVA president Jackie White was understandably proud of the work that her organization does to make sure the hospital has funding for vital equipment needs.

"The items that we purchased last year were very much needed in our hospital."

Those pieces of equipment included 15 automated emergency defibrillators, one for every unit, as well as four new cardiac monitors for the emergency crash carts.

The total donation is now at $3,090,642. Each year, the hospital compiles a wish list of equipment needs and then decides how to use that year's SHAVA gift.

"SHAVA is equally proud of the 19,277 hours our volunteers have donated to the hospital in a variety of ways," White added. The group operates the hospital's gift shop and previously the SHAVA Bookstore that was shut down two years ago to make way for the Grandin Mall development.